You recognize them as soon as they walk into your classroom.  There isn't a sign of glitter on them anywhere but they sparkle.  It's noticeable in the way they walk, the intonation of their voice as they talk, and in the combinations of colors and patterns on the clothing they wear.  They are making a statement with an air of assurance. 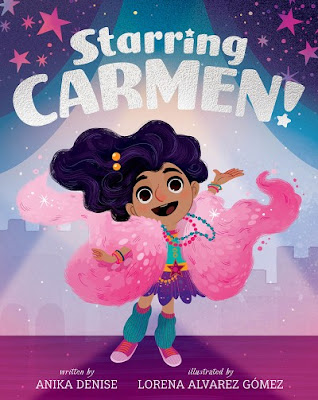 They can be five or fifteen, age is not a factor.  For them life is most definitely not a dress rehearsal and their world, wherever they are, is a platform for a performance.  Starring CARMEN! (Abrams Books for Young Readers, September 12, 2017) written by Anika Denise with illustrations by Lorena Alvarez Gomez is a look at an energetic girl and her equally energetic hermanito (younger brother) Eduardo.

Carmen is a one-girl
SENSACION!

She can act, sing, dance and design costumes.  She never tires of being in the spotlight on stage.  Every night she requires the attendance of her ever-so-patient and supportive parents at her show.  No two shows are alike.

Carmen takes every opportunity to practice.  This is what performers wishing to excel do.  Eduardo watches Carmen with affection and longing.  He wants to be a part of the shows.  Carmen is not eager to share the fame and glory.

As the newest show is about to start she determines Eduardo would be better as a lamp, wearing a shade over his face, than his original role of a rock.  Tonight the musical is rather lengthy; seventeen songs, slightly less dances and a bit of karate.  Poor Eduardo is not aware the show is over.  (How can you with something over your face?)

When Carmen requests an encore at dinner, her parents resist her urgings.  The next morning they try to cheer up a melodramatic Carmen, pouting at having only one show the previous night.  When she attempts to make a point, her mother counters with a fan letter from an admirer.

Pirate play encourages Carmen to assume another position in the upcoming rock opera.  As the evening event is about to start everyone in the family appears to be happy with this production, especially Carmen.  There is nothing better than an inspired great surprise.


There is no denying the liveliness of the main character in this title when reading the words penned by Anika Denise.  To heighten the effervescence of the story, Spanish words and phrases are used with affection by Carmen's parents.  A blend of narration and dialogue contribute to the connection readers will feel with Carmen, her little brother Eduardo, and their parents.  The dialogue also informs us of the moods of the characters as well as the strength of the family unit.  From this we can see the gentle humor in more than one situation.  Here is a sample passage.

"Do I have any lines?"
asks Eduardo.


You expect her to dance right off the dust jacket, singing one of her many songs.  Looking right at readers Carmen gives us a preview of her personality and presence on and off the stage.  The dazzling hues in the set, curtains and props, extend over the spine, unfolding like a Broadway musical presentation.  On the left, the back, gazing over his shoulder at his sister, Eduardo, holding a smiling star on a wand, is adding his share of magic to the show.

On the book case we get a peek at an interior illustration spanning edge to edge.  Carmen is taking a bow after her show.  Eduardo is not sure what's happening.  This is our first glimpse of the elaborate, inventive and vividly colored costumes and sets fashioned by Carmen.  The opening and closing endpapers are a rich, rose canvas.

Beneath the text on the title page, dressed in costumes, Carmen and Eduardo dance in pure happiness.  Rendered with paper, pencils, and Photoshop by Lorena Alvarez Gomez the illustrations invite participation in the story and generate ear-to-ear smiles.  Her full color images are frequently placed on a crisp white background to draw our attention to the included details.  They may be loosely framed.

Her pictures spreading across two pages are marvelous in their use of precise shapes, clean lines and colors ready to burst out of the book.  These ask the reader to stop.  They ask us to step into the lives of these family members.  We reply with an eager YES!

One of my many favorite illustrations is the one depicted by Lorena Alvarez Gomez for the text previously quoted.  The bodies of three sea dragons swirl and curl in shades of pink, golden orange and blues and greens across both pages.  Colored paper, scissors, glue, pictures, books and already completed fish surround Carmen as she works on one of the dragons in the center of the right hand portion of the picture.  Outside the gutter on the left, paper in hand, stands Eduardo.  Wide-eyed and hopeful he is asking Carmen to participate in the show.  She is looking up at him with skepticism.


We should all be so fortunate as Eduardo and his parents to have someone like his sister in our lives.  Starring CARMEN! written by Anika Denise with illustrations by Lorena Alvarez Gomez is in a word, exhilarating.  This character's passion for performing and positive perspective on life is contagious.  Her propensity to stand in the spotlight alone is tempered by her love for her brother.  Your patrons will be asking for this book frequently.  They will hardly be able to wait for the promised sequel.  I can't wait to read this one aloud.

To learn more about Anika Denise and her other work, please follow the link attached to her name to access her website.  If you follow the link to the page about this title, she has activity guides in English and Spanish and templates for Starring CARMEN! crafts.  At the publisher's website they have printable activity kit pages.  I know you'll want to visit Scholastic's Ambassador of School Libraries, John Schumacher's blog, Watch. Connect. Read., to enjoy the premiere of the book trailer and a chat with Anika Denise.
Posted by Xena's Mom at 8:28 PM