More than one hundred fifty years ago a fairy tale emerged from a far north country.  It is a story based on need and greed.  The one prompts teamwork to overcome a bully dominated by the other. 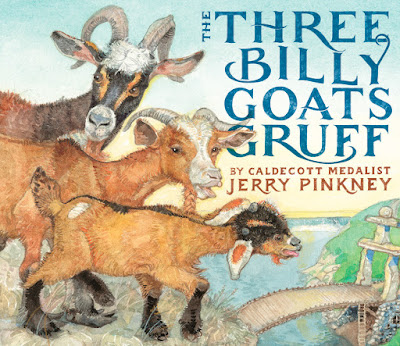 Some versions have shown it to be a contest where there are only winners and a loser.  The Three Billy Goats Gruff (Little, Brown and Company, May 9, 2017) written and illustrated by Jerry Pinkney asks readers to ponder other possibilities.  It extends the "what if" beyond the story's ending.

A long time ago, on the rocky side of a river, there lived a family of three hungry billy goats Gruff.

There was little if any food on their side of the river but on the other side grass-covered hills rolled from one into another.  They could easily reach this veritable feast by crossing a nearby bridge.  The challenge was the troll who lived beneath the bridge.  He was hungry too...for goats.  (In case you are wondering why they never waded across in the river, danger lurked in the waters.)

As the hungriest of the three goats, the little one dared to cross the bridge first.  A loud voice boomed from beneath the bridge demanding the identity of the one who walked the bridge.  The little billy goat answered as did the troll.  Convinced by the smallest of the trio, the troll allowed him to continue as he waited for a larger meal.

As clever as the first goat, the middle-sized goat assured the troll there was a third goat, a bigger goat, about to fatten himself with the grass on the other side.  The cranky troll waited.  To say he was shocked by the events which followed would be an understatement.

The biggest billy goat Gruff did not walk upon the bridge.  He smashed through the gate causing the troll to screech out his question.  A verbal exchange escalated to a physical encounter with the troublesome troll tumbling off the bridge into the water.  If you think his life was in danger you would be right.  If you think he was never seen again, you might be wrong.


A vision of the setting is created by the words of Jerry Pinkney.   It's easy to understand why those hungry goats wanted to cross the bridge.  It's also easy to see why they waited so long to battle the bully under that bridge.  Pinkney supplies a storytelling rhythm with the repetition of

It continues with the question asked by the troll and the following conversation with each billy goat; making for an ideal audience participation tale.  A gentle tension is generated by this cadence building toward Pinkney's version of closing events.  Here is a sample passage.

"It's only I," the littlest billy goat squeaked.
"I'm heading up the hillside to make myself fat."

"I'm going to gobble you up!"
declared the troll.

"Oh, no, don't eat me!" cried the littlest goat.
"Wait until the next billy goat crosses.
He's much bigger than me."


When you open the dust jacket the large image spanning the entire space, even a little bit on each of the flaps, you can't help but marvel at the realistic portrayals of the goats, the rich color of their coats, the angles of their legs and hooves, position of their tails and their facial features.  Amid this wondrous display Jerry Pinkney includes the bridge on the right and to the left, on the back, the troll with one of his companion crows, greedily watches.  On the book case the

thriving on the other side of the river cover the entire space, lush and green.

The story begins and continues on the opening and closing endpapers.  On the first we are shown a panoramic vision of the rocky home of the billy goats, the river, bridge, troll's home and his vantage-view station.  On the second the scene is the identical but entirely different at the same time.  A change in the sky's shades and the light's reflection declares more than the end of the day.  On the title page picture we zoom in on the two sides of the river and the bridge, goats moving across toward the troll, and the title text placed along the bridge.

The art for this book was created using pencil and watercolor on Arches cold-pressed paper, each illustration laid from page edge to page edge across two pages.  At times to supply pacing one image stretches across the gutter for only another half page, leaving space for a smaller, close-up picture. When the first billy goat crosses the bridge we see the view above and below the bridge, goat and troll in his dark abode.  The troll gets bolder with the larger goats, standing on the bridge challenging them.

As the largest of the three billy goats Gruff charges onto the bridge, Mr. Pinkney has fashioned a stunning gatefold.  We as readers are amid the action.  During the following page turns elements break the framing and a large picture is placed over an even larger illustration several times.  Altered perspectives heighten the emotions of the individual moments.

One of my many favorite illustrations is on a half-page.  It is of the smallest billy goat Gruff before he crosses the bridge.  He is looking at the BEWARE sign secured at the top of the gate.  You can compare his size easily; feeling his fear and his bravery.


This reader is happier than you can imagine with the retellings of folklore by one of children's literature's finest authors and illustrators.  Each one is a treasured gem.  The Three Billy Goats Gruff written and illustrated by Jerry Pinkney is perfect.  At the close of the book Jerry Pinkney in an Artist's Note speaks about his interpretation of the tale through his words and art.  It is a must read.

To learn more about this marvelous man and his other work please visit his website by following the link attached to his name.  Author, reviewer and blogger Julie Danielson highlights this title on her blog, Seven Impossible Things Before Breakfast.  Margaret Kimball talks about the process for the lettering on the dust jacket here.
Posted by Xena's Mom at 3:18 PM