With the number of books being published each month in a given year, it's an overwhelming task to read all those which may interest a reader.  It's a good problem to have but sometimes it may take months before you read a title.  You shuffle books on and off your purchase list.  You move volumes from top to middle to bottom of your to-be-read stack and back to the top again. 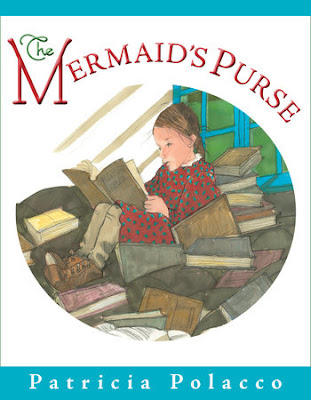 Finally a book makes its way into your home.  And then a day comes when you know you have to read it; it's calling to you.  The Mermaid's Purse (G. P. Putnam's Sons, an imprint of Penguin Random House LLC, October 4, 2016) written and illustrated by beloved Michigan author illustrator Patricia Polacco is one of those books.  When such a book fills your heart with joy and your eyes with tears, you know the saying of "a story chooses you" is completely true.

A clap of thunder roared at exactly the moment my grandmother came into the world during a raging storm in 1883 on her parents' farm in Locke Center, Michigan.  She was the first of nine children.

At this baby's birth the midwife declared

"God's blessing and gifts will fall upon this child like spring rain."

This precious girl, given the name Estella, was born in a Mermaid's Purse, a protective sac.  From that moment forward she was living proof of the midwife's prophecy.

Her affinity for predicting storms was uncanny.  It was astonishing how early she learned to speak and read.  As she grew older she saved every penny earned to purchase books.  Her collection grew larger and larger to the point her father volunteered to build her a library.

One fine day a group of her father's friends gathered and constructed a perfect little library for her.  One, Fred Barber, an apprentice, could not take his eyes off of Estella.  Another, cranky Pig Ears Lonsberry thought the whole thing was total foolishness.  As the last stack of books was carried from house to library, a storm rolled into the area.  Right then and there Estella named her library the Mermaid's Purse.

Estella decided to start taking books in a cart from farm to farm, giving the men and their families who had helped her a chance to enjoy the benefits of a book.  Local children came to the Mermaid's Purse for storytelling.  It wasn't until a book actually helped a farmer on the verge of losing an entire herd of sheep, that Estella's books demonstrated their purpose.

Storms in all seasons came and went with Estella knowingly warning those around her.  More than one life was saved.  It was a terrible event though, a twister, destroying everything this generous spirit held dear which truly portrayed the admiration the community felt for Estella and her Mermaid's Purse.


Gather close readers.  When Patricia Polacco writes it's as if she is within the same space as you are, softly telling you a tale, sometimes true, casting a spell to bring you into that remarkable world.  She is a master at creating a true sense of place and making the characters fully alive.  There is an emotional impact in her stories touching on those things all people believe are valuable.  She invites and unites us with her words.  Here is a sample passage.

She swam to a large rock in the center of the pond.
She no more than scrambled up on it when she
heard a low rumbling off in the distance.  The
sky was darkening and the clouds glowed
with shards of lightning.
"Get out of the water!" she warned the boys.

All scrambled out but one.  Moon Eyes Fred.
"Fred!" she shouted.  "Thunderstorms are something I know about.  That lightning  is closer than you think."
No sooner had she said those words than there was a bright flash of light and Fred disappeared beneath the surface of the water. Stella jumped in and pulled him to shore.


From the moment you hold the matching dust jacket and book case in your hands, you know another Patricia Polacco jewel will be added to the treasure on your bookshelves.  Who is the girl reading on a pile of books? What is a Mermaid's Purse?  To the left, on the back, this same girl is handing a book from a cart full of books to a dubious farmer?  The opening and closing endpapers are pale sky blue with darker blue vertical stripes.  With a page turn an image of a midwife holding a newborn announces the introduction describing Estella's birth.

Rendered in pencils and markers each illustration created by Patricia Polacco, in full color, spans two pages.  Although she painstakingly portrays the settings, inside and outside homes, it is the depiction of her characters which reaches out to readers.  Clothing, quirky traits and personalities reflected in faces and body postures bring her people to life on the pages.  We sincerely connect to her people.

One of my many favorite illustrations is when the clouds burst with rain on the day they move all of Estella's books from her home to the Mermaid's Purse.  On the left of the two-page picture she is standing in the rain, legs spread as she runs and arms open wide.  Her head is lifted to the sky as she names her library.  On the left several of the workers, including Fred Barber watch astonished outside the library.  You will find yourself feeling as though you are standing in the middle of the storm, rain pelting your body and laughing with happiness along with Estella.


If ever there was a book depicting the power of books, reading and libraries, The Mermaid's Purse written and illustrated by Patricia Polacco is that book.  You find your heart swelling with gratitude for the soul of this girl.  This is a true story based upon the life of Patricia Polacco's grandmother.  On the last page she includes several photographs of Estella at different points in her life.  Stella eventually donated her collection of books to the Williamston Public Library in Michigan where she taught school,

...where books from it still remain today.