Lured By The Need To Know The Explorers: The Door in the Alley Blog Tour

Life is full of temptations.  There will be situations when you know you should heed your mother's words of "when in doubt, don't".  Every fiber of logic in your mind is telling you to stick to the well-known path but there's a tiny whisper, an urge to stray.  What can it hurt?  Right?  There are also those people who have no choice but to leap into the face of the unknown.  It can be a matter of life and death for them and for others. 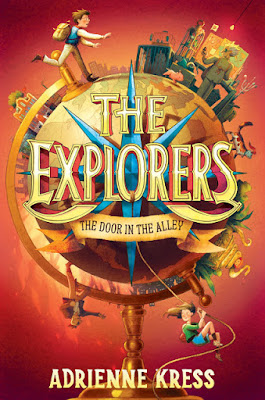 Breaking free of one's comfort zone will usually have consequences.  The Explorers: The Door in the Alley (Delacorte Press, an imprint of Random House Children's Books, a division of Penguin Random House LLC, April 25, 2017) written by Adrienne Kress with illustrations by Matthew C. Rockefeller will have you glued to its pages from the first sentence.  The results of choices made lead two new friends into unfamiliar territory.

Chapter 1
In which we meet
Sebastian.
This story begins, like most stories do, with a pig wearing a teeny hat.

Quite frankly, a story beginning with a pig wearing a hat is a bit out of the ordinary so first we follow Sebastian home from school one day along with his cousin Arthur.  Sebastian goes to a special school for those most interested in math and the sciences, grades four through eight.  Sebastian's life is very precise never deviating from a set direction in anything.  Arthur, on the other hand, creates a situation where change is inevitable for Sebastian.  He is about to experience the flip-side of the coin of his life.

The next day the pig wearing a teeny hat finally makes an appearance running into Sebastian's path as he nears his home.  It belongs to a man who requests Sebastian follow him down the creepy alley from yesterday into a place with a sign next to the door reading

Through no fault of his own, after a series of encounters, Sebastian earns a punishment requiring him to return to The Explorers Society after school daily.

For two long years Evie has been attending classes and living at the Wayward School since her parent's deaths.  Each week she attends the home of the Anderson couple for dinner.  It's an honor to be chosen but it's so boring she can hardly stand it. At least she gets to leave the school and the girls there who make her life miserable.

This week, on this night, the cocktail hour is interrupted by a man coming to the door.  His jaw is weirdly wired together; he has weapons.  In a bizarre scenario dinner proceeds but then everything goes amiss.  Another man arrives with half of his face looking as if melted.  There are gunshots, a frantic escape through an underground dirt tunnel and a treacherous fire.  Evie is handed a letter by Mrs. Anderson and told to go to

Now it stands to reason Sebastian and Evie will meet.  They do but after both of them are asked to leave The Explorers Society after voicing questions and concerns to the head, Myrtle.  It seems she wants nothing to do with Alistair Drake, Evie's grandfather, and The Filipendulous Five, a renowned group of explorers banned by the society.

Armed with clues from the letter Evie got the night of the fire and photographs and newspaper clippings Sebastian uncovers from a puzzle box he finds at the society, the two make a pact to find the key and help save Alistair Drake from whatever danger has him trapped.  The action increases tenfold as the duo try to find members of the original five.  (You will find yourself holding your breath repeatedly.) The two deadly pursuers from the night of the fire will do anything to get the key before Sebastian and Evie.

A heart-pounding thrill-a-second-chase at The Explorers Society will have you wondering how the conclusion will unfold.  This building is no ordinary building with ordinary floors and ordinary rooms filled with ordinary objects.  When you think all is well, it most definitely is not.  One word readers says it all...a humdinger of a cliffhanger.  Okay...five words.


The writing style of Adrienne Kress is captivating.  Each chapter begins with a sentence predicting a major event or situation to be revealed;

In which we attend a different kind of dinner party.

In which no dead bodies are found. or

In which we experience a higher education.  Literally and figuratively.

Within the chapters a combination of dialogue, narrative and humorous footnote commentary propel the plot fast and furiously forward.

Vivid descriptions of place and the action bring them directly to the reader.  Through the conversations between the characters we become keenly aware of their personalities.  Here are some sample passages.

Suddenly he felt arms wrapped around him, squeezing whatever breath remained in him out in one tight hug.  "Oh, thank you, thank you!  You won't regret this, I promise!" said Evie.

"You're welcome," wheezed Sebastian.  "Could you...release me now, please?"

"Of course!"  Evie let him go and just stared at him, smiling wide.

"It's uh...probably time for us to turn in," said Sebastian, feeling a little uncomfortable with how grateful she looked.

"Okay!  So the plan for tomorrow will be we say we're going to school, but really we'll get on the bus and head to the university.  I think we'll have plenty of time to get there by one."  Evie stood up and so did Sebastian.

"Good plan," said Sebastian, realizing just then that not only would he be skipping school, but he'd have to lie to his parents about it.  He really couldn't talk about this anymore; he might black out from the stress.  "Here, let me show you to your room."


And then she spun around, leapt up onto the atlas, and pulled herself through the tiny window, scrambling out onto what was fortunately a sill, though unfortunately, an incredibly narrow one.  The man's hands appeared through the window a moment later, grabbing at her fleeing foot.  She narrowly avoided him, scrambling to hold on to the side of the building.  She pulled herself up to standing and walked carefully along the wall away from the window, willing herself not to look down.

The man stuck his head out the window and stared at her, aghast.  She understood the feeling; she was pretty aghast herself.  What on earth had possessed her to just launch herself out through a third-story window like that?  Well, fear for her life, she supposed.


That this title, The Explorers: The Door in the Alley, written by Adrienne Kress with illustrations by Matthew C. Rockefeller is the first in the series is fantastic.  You may think you can read this book in parts but I guarantee you will reach a point when you can't put it down.  You are driven by the need to know.  Some secrets are revealed but many more need to be uncovered.  I can't wait for the next book.  (This post is based upon my reading of an ARC.)

To discover more about Adrienne Kress and her other work please visit her website by following the link attached to her name.  If you would like to read an excerpt stop by the publisher's website.  Adrienne Kress visited Scholastic's Ambassador of School Libraries John Schumacher's blog, Watch. Connect. Read.  Quill & Quire shines the spotlight on Adrienne Kress.  Adrienne Kress is a guest on All The Wonders, Books Between, Episode 22.