A Day At The Beach

In the state of Michigan the season of summer signals numerous things, as it probably does in other states, but without a doubt for many residents and visitors it means days at the beach.  With more than eleven thousand inland lakes you are never far from a sandy shore.  It is said you are always within eighty-five miles of one of the Great Lakes no matter where you are standing in Michigan. 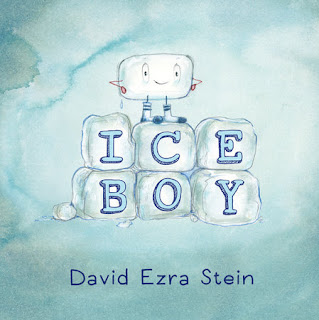 A day at the beach here can be spent swimming, floating on a raft, constructing sand castles, searching for Petoskey stones, walking, skipping stones, throwing water toys for your dog to retrieve or sitting in a sand chair in the water reading your favorite book.  No one who enjoys hours in any of these pastimes, or something else entirely, expects to completely transform themselves.  In David Ezra Stein's newest title, Ice Boy (Candlewick Press, April 11, 2017), that is precisely what happens to one very bold ice cube.

Ice Boy had a normal life:
goofing around with his brothers and sisters...
dodging tough cubes from the back of the freezer.

Every so often one of the cubes would disappear to be used to chill some human's drink.  This was considered the highest honor according to Ice Boy's parents.  Ice Boy did not agree.

Despite his parent's warnings to never to outside of the freezer and his doctor's strict advice to avoid the sun at all costs, Ice Boy left the freezer.  Ice Boy went out into the sun.  And the first place he visited was the beach.  He was thrilled to be playing in the water.  Then something unexpected happened.  He changed into Water Boy.

He never imagined he would be able to greet sea birds, get tickled by a crab or feel the fuzz on a beach towel.  As he basked in the sun on the soft surface, something else unexpected happened.  He shifted into Vapor Boy.

Floating up higher and higher he developed into a drop.  He was dancing the day away on a thunderhead when it turned freezing.  He plunged down, down, and down falling as hail.  He was Ice Boy once more.  Turning and tumbling topsy-turvy he headed toward a neighborhood, a house and a backyard.  Somehow, more than one cube ended up having the time of their lives.


What makes this book particularly pleasing for the intended audience is the blend of conversations and comments in the form of speech balloons with the narrative text.  These extras contain just the right amount of humor and puns. The story is completely fictional but David Ezra Stein has cleverly woven an introductory lesson on the wonder of water into this book.  (It is also the only chemical compound that occurs naturally on Earth's surface in all three physical states:  solid, liquid and gas.)  Here is an example passage.

Vapor Boy was light as air.  He wafted so high,

[Am I dense, or did I just become a liquid again?]

he became a little drop.


As soon as you look at Ice Boy standing on those cubes, hands on his sides and a grin on his face wearing tube socks, you know this is no ordinary ice cube.  No sir, this ice cube craves adventure.  It's a marvelous technique David Ezra Stein uses around the central element of character and title text.  It's like they are floating in water.  To the left on the back on a white canvas is an interior image.  Ice Boy is leaving the freezer exclaiming

The opening and closing endpapers are a pale steel blue.

Rendered in mixed media on watercolor paper the illustrations vary in their size from double page spans, edge to edge, single page pictures, edge to edge and loosely framed insets on single pages.  In some of the smaller images a portion of an element will break through the border.  These fluctuations contribute and accentuate the pacing.

The physical features on the ice cubes, particularly Ice Boy, endear the characters to readers.  They all have delicate feet, arms, eyes, and mouths.  Ice Boy's father has a mustache.  Some of the ice cubes are wearing bows on top of their heads or hats.

One of my favorite of several illustrations is when Ice Boy first leaves the freezer.  He arrives at the beach.  Most of the image is a wash of sky and sea with waves breaking on the sand.  Up the dune in the distance we see a life guard and several people playing along the shore.  We zoom in on Ice Boy arms thrown in the air as he tosses his socks which he removed.  He is jumping in the air ready to greet the waves grinning in total joy.


I believe educators and younger readers are going to appreciate the fun (and learning) found on the pages of Ice Boy written and illustrated by David Ezra Stein.  The mix of straight text with comments and conversations in graphic style will be appealing to readers.  I can't wait to use this title as a read aloud.

To learn more about David Ezra Stein and his other work please follow the link attached to his name to access his website.  The link initially takes you to a wonderful post about The Making of Ice Boy.  At Penguin Random House and Candlewick Press you can view interior images.  David Ezra Stein talks about this book with Nick Patton at All The Wonders, Picturebooking, Episode 77.  Author illustrator Matthew Cordell and David Ezra Stein chat at Season 2, Episode 1, Number Five Bus Presents...


I am aware this book is a work of fiction but because it contains nonfiction portions I am including it for this week's 2017 Nonfiction Picture Book Challenge title.  Be sure to visit educator Alyson Beecher's Kid Lit Frenzy to view the other choices of bloggers this week. 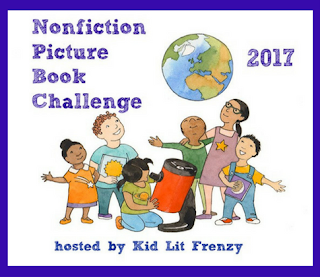