There's nothing quite as wonderful as walking through a nature park in Michigan on a beautiful spring morning until your dog stops dead in her tracks.  She sharply turns her head looking intently into the woods.  Then a deep rumbling growl begins in her throat before the angry warning barks start.  You listen to see if the bird song has changed.  You look for any color or movement out of the ordinary but you see nothing.  You are still afraid knowing your canine companion has detected something unfriendly. 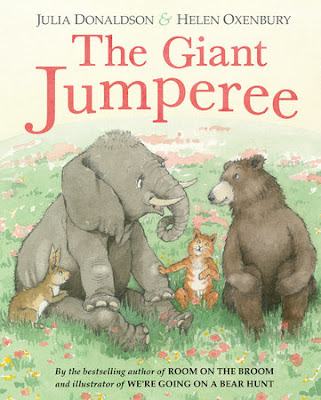 Quickly you alter your course.  The unknown has spoken to a keen primal instinct for preservation.  The Giant Jumperee (Dial Books for Young Readers, Penguin Young Readers Group, an imprint of Penguin Random House LLC, April 18, 2017) written and illustrated by beloved names in children's literature, Julia Donaldson and Helen Oxenbury, considers how beings approach what they cannot see and therefore might fear.

Rabbit was hopping home one day when he heard a loud voice coming from inside his burrow.

"I'm the GIANT JUMPEREE
and I'm scary
as can be!"

After this frightening announcement Rabbit was not willing to enter the burrow.  Cries for assistance were answered by a nearby friend, Cat.  Cat was going to sneak inside and jump right on top of the boisterous intruder.

Cat was almost through the entrance when an ominous voice called out a warning.  She froze too spooked to move.  When she yelped for help Bear happened to reply.  Bear was more than ready to offer a "paw-sitive" outcome.

A bear is a pretty fearsome creature but when that voice bellowed out a dangerous promise, he paused.  Three animals do not want to enter the burrow but a fourth, Elephant, is willing to stick in his trunk and wrap it around the dastardly monster.  When the GIANT JUMPEREE speaks, you can with certainty guess the consequence.  These four friends have a serious problem.

Up in the top of a tree, Mama Frog hears Elephant's trumpets.  As casual as can be, Mama Frog volunteers to rid Rabbit's abode of this monstrosity.  Rabbit, Cat, Bear and Elephant all reiterate what might befall the courageous amphibian.  She bravely proceeds and issues her own challenge.  Will it be met?  Who or what can the GIANT JUMPEREE be?


Each time this title is read a smile will be forming and growing bigger as each animal approaches the burrow opening.  Julie Donaldson is a master at using repetition to build to a surprising conclusion; each animal replies to the challenge with the same response.  When a new animal asks a question, the answer is the same.  The warning issued by the GIANT JUMPEREE is different each time but the endings rhyme.  These repetitions and the rhyming create a marvelous cadence inviting reader participation.  There is not a reader in the world who has not heard Mama Frog's ultimate choice for the inhabitant of the burrow.  Here is a sample passage.


Rendered in watercolor the illustrations throughout and on the matching dust jacket and book case create a classic, comforting feel for the reader.  It's unlikely a rabbit, elephant, cat and bear would ever be seated in a field of flowers together but when Helen Oxenbury is the illustrator, it's as normal and extraordinary as can be.  Her play of light and shadow, delicate details, expressive facial features and soft, textured backgrounds and characters are a joy to see.  To the left, on the back, Rabbit is standing startled outside his burrow having just heard the declaration from the GIANT JUMPEREE.

The opening and closing endpapers are done in a soft, warm brown wash; almost like sepia tone.  On the first Rabbit is standing on a hill looking down at his burrow.  On the second all the characters are scampering with happiness down a hill.  On the first title page Rabbit is hopping along wearing a smile.  The formal title page and verso is a full color version of the opening endpapers.

With the exception of five smaller pictures, all of the images span two pages.  Careful readers will notice the passage of time in the shifting shades of color in the background skies.  For most of the visuals we are close to the characters.   Their body postures are endearing to the point you find yourself reaching out to hug them.

One of my many favorite illustrations is when Bear has been scared by the GIANT JUMPEREE.  He is pictured on the left side of the picture, leaning back on his front paws with his back paws close together in front of him.  Elephant is seated opposite him.  He is earnestly leaning forward reassuring Bear of his ability to rid them all of the GIANT JUMPEREE.  His back feet are in front with his two front feet resting between them.  They are sitting on a grassy meadow with hills and trees behind them.  Birds in the distance are flying.


You can be guaranteed of hearing listeners ask you to read The Giant Jumperee by Julia Donaldson with illustrations by Helen Oxenbury over and over again.  It's a delightful story of four faithful friends and a fifth companion willing to take a risk.  The results are surprising...and funny.  I highly recommend this as a read aloud, reader's theater or get out your puppets for some creative drama.  I would not be a bit surprised to see this title appear on the nominations for the 2018 Kate Greenaway Medal.