No Rest On The Rails

The tracks are miles away from my home but not so far I can't hear the whistle blow as it speeds by a crossing late at night.  As I stand and stroll in my backyard with my canine companion listening to the sound, memories stir.  A little girl is putting together the tracks so her new train set can run around the Christmas tree, counting the cars between the mighty engine and the caboose as she waits in the back seat of her parent's green Chevrolet, sitting on the seat of a small train taking her through the local zoo or a jungle filled with parrots in Florida.  A young woman is gripping the arm rests as a train climbs through mountains in Canada. As an adult a woman visits the bustling city of Chicago for the first time traveling by train into the famous and now ninety-two year old Union Station. 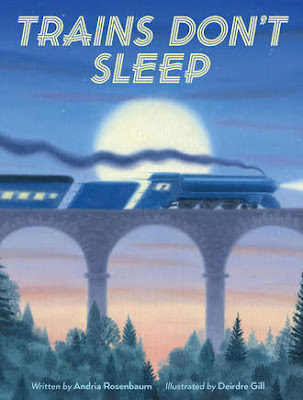 There never seems to be a time of day when a train is not moving along the tracks, destination known.  Trains Don't Sleep (Houghton Mifflin Harcourt, May 2, 2017) written by Andria Warmflash Rosenbaum with illustrations by Deirdre Gill is a soothing, sensory journey with trains designed for a variety of functions.  It's a tribute to this fabulous form of transportation.

Through the night the train zooms, never slowing.  As the light of morning breaks over the horizon, a train pulls into a country station before making another stop in a city rimmed with tall buildings.  The large windows and comfy seats welcome passengers.

On another parallel track, a locomotive pulls cars of different shapes and sizes.  Each one with a particular purpose.  It's certainly fun to know, they sometimes carry other vehicles that perform special tasks when they get to go.

These trains travel over all types of terrain using bridges, trestles and tunnels to reach a place.  In all kinds of weather they push forward, never wavering from their goal.  What's this we see chugging past?

Its cars are carrying precious cargo destined to bring cheer to audiences near...and far.  Animals, performers and crew have exceptional assignments to do.  Trains leave.  Trains go.  The day is done, evening descends.  They meet together at their travels' ends.


When the narrative written by Andria Warmflash Rosenbaum comes to a close readers will feel as if they have rambled across the tracks with these trains, dawn to dark.  The gentle rocking felt as a passenger, the click-clacking heard as trains pass, the hiss heard when trains to life or heard when they screech to a halt or the sight of each train, car contents known and unknown, these things all contribute to our connection to this manner of moving from one point to another point.  At the end of every two lines, gathered by two or four, rhyming words whisper the cadence of wheels on tracks.  Andria Warmflash Rosenbaum creates a memorable melody for her readers.  Here are sample passages.

Trains don't sleep---
They CLANG and HOOT,
Reaching stations on their route.


Rendered in oil on paper the illustrations beginning with the matching dust jacket and book case are a pictorial homage to trains.  The arched bridge stretches across the spine to the left, on the back.  The forest beneath the expanse is shown in various deep green hues as the sky blooms in the dying light of day, a full moon rising in the sky as stars begin to show.  Speed and resolve are conveyed in the lines and angles of the train.  Notice the formation of the text letters.  On the opening and closing endpapers one of the darkest shades in the sky covers the space.

In the glow of an engine light the words appear on the informal title page as the trains shown in the story are named.  A glorious night scene of the train moving down a hill toward the station, windows bright with a pale golden shimmer, spans the verso and title pages.  With each page turn an image extends from page edge to page edge.

The pictures are stunning through the use of light and shadow by Deirdre Gill.  Wild and domestic animals are shown when appropriate as the trains race and rumble through cities, towns, country, forests and mountains.  Deirdre shifts her point of view drawing readers deeply into each scene, a train passing through tall grasses with cows grazing, standing on a station waiting for the arrival of a train, two passengers watching the city fade as the train moves, or an engine breaking through piles of snow in a darkening storm.  Each visual can stand alone but flawlessly becomes part of the wonderful whole as the hours pass.

One of my many favorite illustrations is when the freight train, Engine106, is trudging through the snow.  You can almost hear the sound of the wind and the ferocity of the storm as the drifts grow deeper on the tracks.  The contrast of the dark engine, snow and gray sky supplies a perfect mood.  You'll find yourself reaching for a sweater or a blanket.

To discover more about author Andria Warmflash Rosenbaum and illustrator Deirdre Gill please follow the links attached to their names to access their websites. Andria is interviewed at GotInterviews, Picture Books Help Kids Soar and KidLit 411.  At Lauri Fortino's Frog On A (B)log you can find an interview with Deirdre Gill.
Posted by Xena's Mom at 10:48 PM