Even if you have a fear of heights, once you arrive and enter everything changes.  The small space, four walls with perhaps a single door, a single window and a roof to keep out the weather, is a place where memories lasting a lifetime are created.  Wishes are spoken aloud.  Promises are made.  Secrets are voiced. 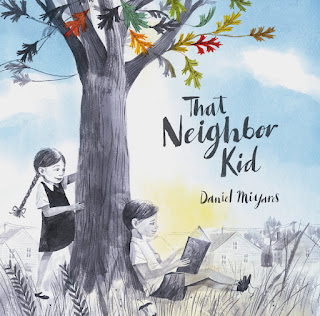 When this haven is constructed by hand and with help, its value increases.  That Neighbor Kid (Simon & Schuster Books for Young Readers, May 9, 2017) written and illustrated by Daniel Miyares is about the art of reaching out and receiving.  Taking chances can lead to a far greater joy than believed is possible.

In a nearly wordless narrative a dreary day is the backdrop for a shift in a neighborhood dynamics.  A moving truck is parked in front of one of the houses on a street lined with sidewalks and filled with mature trees.  As the household items are unloaded, a boy reads a book in the back yard next to a large tree.  He is unaware of being watched.

We along with the observer realize he is focused on seeking sanctuary in that tree.  Still hidden the neighbor sees the new boy remove and take some of the boards on the fence dividing their property.  He then climbs up smaller pieces of wood nailed as steps to a top part of the tree.  The hammer stuck in his waistband drops.

The hammer is retrieved by the neighbor.  She arrives where the boy is puzzling over plans amid his bucket of nails and boards.  Looks, a single word and items for building are exchanged.  A crew of two now knows what to do.

The pure bliss they feel at their accomplishments glows like the colors now visible on the fall foliage.  Fun continues as the project and day come to an end.  A starry sky and glowing windows hold the hope for future endeavors.


One single word, the same word, is spoken by each of the characters once. This story conceived by Daniel Miyares thoughtfully looks at the development of friendship, the idea of offering advice and accepting it, of removing barriers to build something new, teamwork, and having the courage to do all of these things.  In the way each portion of the story unfolds, Daniel Miyares allows his readers to ask questions, think about their own choices and come to the realization the best and most lasting things rarely happen quickly.


When you open the dust jacket the scene of homes, the field of grasses and sky with a few clouds extends over the spine and to the left.  The difference is the colors fade.  It's the promise of friendship which adds brightness to the day.  The little details like the apple core next to the boy and the grasshopper on a bit of grass give authenticity to the image.

On the book case the elements are extremely spare on a cream background.  To the left the grasshopper remains but the grasses are few in number.  The girl, a smile playing about her mouth, crosses the spine.  She follows the boy running and carrying a board.  We don't see his entire body; part of him is off the case.  The opening endpapers are a wash of deep grays.  The closing endpapers are golden yellow with hints of brush strokes.

Rendered in ink and watercolor on Strathmore paper most of the pictures cover two pages.  These larger visuals reach out to envelope the reader.  When the two children meet and begin working together Daniel Miyares wants us to slow down and work alongside them.  These images are smaller and framed with the tree branches.  It's a beautiful thing to watch.  With each successive illustration more of the oak leaves turn from gray to autumn shades.

One of my favorite pictures of many (you could frame any of them to hang on a wall) is when the children are taking a break in their building.  We are looking at them from above.  The floor (maybe more) of the tree house is completed.  The plans are spread on the floor along with a saw, pencil, nails, boards and the hammer.  One of the windows is indeed in place casting a shadow over the girl lying on her back, smiling with pigtails spread behind her.  The boy, lying on his back, is holding a bright red leaf and smiling with legs crossed and one arm behind his head.  Sunlight is splashed on other portions of the illustration.  This is childhood at its finest.


There is a timeless quality to the story and the portrayal of the characters in Daniel Miyares's That Neighbor Kid.  Even the title supplies wonder; is it the girl or the boy who is the neighbor kid?  I can't imagine a personal or professional bookshelf without a copy of this book.

To learn more about Daniel Miyares and his other work please visit his website by following the link attached to this name.  Daniel has an account on Instagram.  You can view interior images from this book at the publisher's website.  Author, reviewer and blogger Julie Danielson talks with Daniel Miyares at Seven Impossible Things Before Breakfast.  In one of his Saturday videos to educator Colby Sharp, Scholastic Ambassador of School Libraries John Schumacher talks about this title at Watch. Connect. Read.  Daniel Miyares is featured at KidLit 411 and All The Wonders, Let's Get Busy, Episode #232.
Posted by Xena's Mom at 12:30 AM