There are subtle signs if you are savvy.  A halo around the moon, the underside of leaves showing in a breeze, a red sky in the morning, and mares' tails (cirrus clouds) are folklore indicators with scientific basis for predicting rain is coming soon.  If birds tend to fly lower than normal, it's usually evidence of the barometric pressure dropping which means a change in the weather is to be expected.  There is also some truth in the proverb, Rain before seven, quit by eleven. If it's raining early in the morning, it has probably been raining during the night.  The front might be ready to move out of the area. 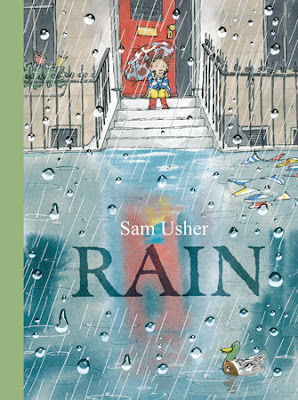 We have had more rain than usual in southern Michigan this spring.  There are still areas under flood advisories and warnings.  Even though the standing water in my yard is gone for now, I had a female duck strolling through my back section this morning.  I wonder if she was assessing the possibility of a future pond.  In a companion title to Snow (Templar Books, October 13, 2015), Rain (Templar Books, an imprint of Candlewick Press, March 28, 2017) written and illustrated by Sam Usher is brimming with distinctive possibilities found on those wet weather days.

When I woke up this morning, it was raining.

This did not quell the excitement the boy felt.  Oh, it did not.  He wanted to go outside immediately.  His grandfather had an entirely different opinion.  Pointing out the fun to be had in the rain like splashing

did not change Granddad's mind.

After much waiting and even more waiting, the rain continued.  Even the suggestion of an exciting sail across a sea with creatures lurking in the watery depths, the grandfather remained firm in his opinion.  They had to wait until the rain stopped before venturing outside.

They put on their coats, boots and carried umbrellas, just in case, and started their excursion to the mailbox.  This trek might have involved previously mentioned rainy day fun because Mother Nature had plans of her own.  Granddad, as grandfathers often do, offered wisdom on waiting.


In the first two simply-stated sentences by the boy Sam Usher gives us a peek into his personality.  This boy is ready for adventure.  As the narrative continues the requests of the boy and the replies of his grandfather create a gentle back-and-forth tension.  This makes their subsequent romp in the rain a joyous reward for patience.  Here is a sample passage.

So I said, "Granddad, I'd like to go on a voyage with sea monsters."
And Granddad said, "Let's just wait for the rain to stop."
But did the rain stop?
No!


All those drops of rain seen on the front of the book case are raised to the touch to give readers a wonderful tactile experience.  The duck and nautical flags make more than one appearance within the pages.  To the left, on the back, the first full page image in the book is showcased.  The boy is seated on his bed surrounded by his stuffed animal friends, musical toys and books.  The stuffed monkey seems to be holding a book over his head as protection.  Outside it is raining, splattering on the window pane.

The opening and closing endpapers are in a dark spring green, white, gray and black.  They feature puddles of water on grass.  In the first in the upper left hand corner the boy's stuffed penguin is reflected in the water.  On the later a portion of the penguin with his inner tube is walking into the endpapers.  He is preceded by a bird with an umbrella and the duck is in a puddle on the right.  The bird caring the umbrella, which looks like those tiny paper ones placed in drinks, is shown on the verso with a tiny snail, puddles of water and delicate flowers.

Rendered in ink and watercolor the pictures alternate between single page, edge to edge images, small visuals together on a single page, atmospheric two page illustrations, edge to edge, and single page pictures loosely and more formally framed.  Even though it's a rainy day, Sam Usher conveys warmth in the illustrations highlighting the conversations between the boy and his grandfather.  His lines are fine, smooth and create animation.

The dramatic pages showing the rain outside are amazing.  Each time the water is deeper and deeper, measured by its position on the fence outside their home.  This makes us believe the boy's wishes might come true.  Careful readers will realize the pictures are telling us another story beyond the text.

One of my favorite illustrations spans two pages.  The boy and his grandfather are stepping outside to mail the letter.  A large portion of the picture is them standing on the porch reflected in the standing water.  Off to the left and right sides we see a toy boat, the duck, a floating umbrella, the penguin's inner tube enlarged and a portion of a gondola.  You have to smile at this scene.


Readers will be ready for the next rainy day after reading Rain written and illustrated by Sam Usher.  The pacing supplied by the blend of text and images is marvelous.  The generational portraits are delightful.  You are going to want this title and the previous one, Snow, because I believe there is a third book in this series called Sun to be released this summer.

You can visit these two publishers' websites, Penguin Random House and Candlewick Press, to view interior pictures.  Sam Usher is interviewed at YoungWriters and Playing by the book.
Posted by Xena's Mom at 10:40 PM