No one knows where or when the first ones were used but it is believed games were played with marbles as long ago as 3000BC; some were found in an Egyptian tomb of a child.  They were originally made of polished stones, fruit pits or nuts or formed of clay long before they were created from glass.  Another game dating back to ancient times is jacks (knucklebones or fivestones).  Prior to the more recent six-pronged metal pieces, bones of goats or sheep were thrown and gathered.  If you were training to be a soldier in ancient Rome chances are you participated in a form of hopscotch according to some sources on the birth of the game.  The courses were said to be one hundred feet long and the men wore all their armor to perfect endurance and strength. 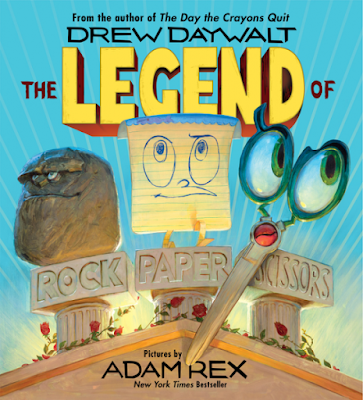 One game for which a variety of theories are proposed as to its origins has been used to make decisions for centuries.  Nothing is needed other than your hands and a keen sense of strategy.  The Legend of Rock Paper Scissors (Balzer + Bray, an imprint of HarperCollins Publishers, April 4, 2017) written by Drew Daywalt with illustrations by Adam Rex sets forth a story so uproarious it must be true.

Long ago,
in an ancient and distant realm called
the Kingdom of Backyard,
there lived a warrior named
ROCK.

There was no doubting the toughness of Rock; he could not be beaten in any contest. While most individuals would be pleased with this particular reputation, Rock was unhappy with the lack of respectable opponents.  He ventured to the far corners of the land seeking warriors.  Alas, neither pinching nor

could beat the power of Rock.  Rock left the Kingdom of Backyard.

In another domain with a lofty peak a second warrior was facing similar issues.  He was called Paper.  His intellect was beyond question.  Threats of gobbling and spitting did nothing to foil this flat fighter.  Sheer numbers found in the Pit of Office Trash Bin were no match for his blocking abilities.  And so, he left the Empire of Mom's Home Office.

In a tiny place within a larger space a third warrior dwelled named Scissors.  Known for her speed, none could conquer her.  Even the multitude of

from the bitter cold hollow was no match for her blazing blades.  Like the two previous combatants she traveled away from her known home.

As the fates would have it, Rock and Scissors encountered each other in a large arena.  A challenge was issued and a battle unlike any other followed with a victor.  One was happy to be vanquished but the other was sadder than ever.  Behold!  Unaware of the impact of his choice of words, Paper entered the scene speaking.  Two more battles with surprising results yielded a trio of triumphant and happy warriors.  Tribute to them and their respectful friendship is paid with every game played.


You have to admire the mind of author Drew Daywalt who imagined this narrative, a story to be enjoyed by all ages in many areas of the world.  It would be safe to say most people have probably engaged in some form of the game.  To explain its creation with loads of laugh-out-loud humor and inventive perception connects all players.

Expanding on the theme of long ago by naming well-known areas inside and outside homes with royal titles is brilliant.  (I know someone is going to make a map of this as soon as they finish the book.) Combining the use of dialogue and unseen narrator makes us feel as though we are reading an epic tale of heroes and heroines, the likes never to be seen again.  Here is a sample passage.

Rock traveled to the mysterious Forest of Over by the Tire Swing, where he met a warrior who hung on a rope, holding a giant's underwear.
DROP THAT UNDERWEAR AND BATTLE ME, YOU RIDICULOUS WOODEN CLIP-MAN!
I WILL PINCH YOU AND MAKE YOU CRY, ROCK WARRIOR!


When you open the matching dust jacket and book case the first thing you notice is the distinguishing physical characteristics of Rock, Paper and Scissors.  Placing them in a setting as ancient champions on top of the columns with roses at the base heightens the reader's curiosity.  The rays of light seen behind them are used again to the left on the back.  A bright yellow canvas holds a place for a unique image.  Rays spread from a triangle holding the hand shapes for rock, paper and scissors.  Written in script are the words Ro, Sham and Bo.  (You'll have to do some research if you don't know what those mean.) A slightly darker yellow, similar to the color of title text Legend, covers the opening and closing endpapers.

On the title page the words are chiseled in stone with a leafy crown of laurel.  Beneath this are the numbers 1...2...3... and turning to the verso we see the word GO!  The size and placement of the illustrations add to the pacing of the text elevating spectacular moments.  Images may be smaller surrounded by lots of white space, single page, edge to edge or across two pages.

Most of the dialogue appears in speech bubbles.  When the characters speak the font changes to reflect their personalities; Rock is in bold blocky letter, Paper is in script and Scissors is decidedly geometric as if cut-out.  Their facial features are ingenious.  In fact everything (almost everything) has faces such as the gobs of gum stuck under the desk.  Readers will love noticing the tiny and not so tiny details; Henry written on the waist of the underwear, the moon in a battle scene, or the Abraham Lincoln stamps on the desk.  And the battle scenes...well, let's just say they are beyond comparison.

One of my many, many two favorite illustrations takes place after the first of three final battles.  Without giving away too much when Paper innocently walks in on the finished fight between Rock and Scissors and casually greets them, the eyes on Rock and Scissors are totally hilarious.  In the second picture again the look Scissors gives Rock, Rock's body posture and the startled features on Paper's face are over-the-top funny.  Adam Rex has done amazing work with this book!


This title, The Legend of Rock Paper Scissors, written by Drew Daywalt with pictures by Adam Rex is read aloud treasure.  There have been several conversations on Twitter (look for Stacy Riedmiller @literacybigkids) about the shared laughter between children and teachers and parents.  I can't read it silently without assigning voices to the characters.  And I have startled my dog more than once reading it aloud.  Every bookshelf, professional and personal, needs to have a copy...maybe several.

If you follow the link attached to Adam Rex's name you can access his website.  He has a blog and Tumblr pages for his books.  You can read a sample of this title at the publisher's website.  There is a short activity kit.