Not A Single Solitary Sound

You have had this wish, this yearning, for as long as you can remember.  You have thought about it every single day.  You have longed for the moment when all the essential details fall into place making this dream come true.  Finally it's going to happen but the opposite of what you have imagined transpires.  Everything goes horribly wrong. 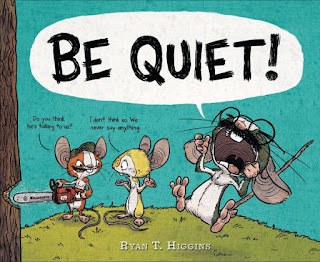 When your deepest desire vanishes like a puff of smoke and not always all at once, but little by little, it can be downright discouraging.  In the case of this newest title, BE QUIET! (Disney Hyperion, April 4, 2017) written and illustrated by Ryan T. Higgins it can be out-of-this-world frustrating.  Three rascally rodents we met in Hotel Bruce (Disney Hyperion, October 18, 2016) are back in their own book.

FINALLY!  I get my very own book to star in.  This is going to be great!

I'm going to make it a wordless book.  They are very artistic.

This book will have NO WORDS at all.  Starting...NOW.

Beginning on the endpapers the story opens.  It continues with more but most definitely, according to Rupert, the final text on the title pages.  The bespectacled mouse with a mustache is sure this is going to be wonderful until a familiar friend strolls up asking him what he is doing.  Nibbs can't stop talking about not talking.  Rupert is clearly getting agitated.  When Thistle walks up Nibbs speaks but Rupert is silent.  His body posture signals deep irritation.

The more Nibbs and Thistle converse about not speaking and the value of wordless books, the angrier Rupert gets asking them to be quiet!  Then they start a discussion about the merits of pictures in wordless books.  Rupert mentions strong illustrations.  This is all the talkative twosome need to go off on another tangent.

They introduce strength in images.  Is that a grumpy bear we know as Bruce?  The sweet cuddly kitten turns out to be a very risky idea.  A green vegetable, a serious portrait and potatoes...yes potatoes make an appearance.  The invention of a silent superhero with the appropriate sound effects has Rupert stomping his feet and shouting.  Nibbs's and Thistle's misunderstanding of Rupert's words will have you laughing out loud.

He is sure his two pals have no comprehension about the meaning of be quiet.  An exploration of

If a tree falls in a forest and no one is around to hear it, does it make a sound?

by Nibbs and Thistle causes Rupert to erupt in a rage.  (A chainsaw and a felled tree figure prominently.)  Completely clueless and a narrow, determined vision don't work well together...or do they?


Ryan T. Higgins sense of humor is evident on every single page, even as early as the dust jacket.  His pacing provides us with anticipated and delivered hilarity.  The contrast between what Rupert wants, which truthfully is a simple request, compared to the misdirected musings of Nibbs and Thistle is comic perfection.  The entire narrative is told in dialogue with short, simple but meaningful sentences.  Here is a sample passage.

Yay!  This book is going to be so fun!
Quiet, you! This book will be more than FUN.  It will be visually stimulating.

What does "vishery strigulating" mean?
I think it means we're going to poke our readers in the eyeballs with pictures. ...


I don't think it's possible to look at the opened dust jacket without laughing.  Rupert is already in a rage and Nibbs and Thistle are on a totally different mental plane.  Nibbs with the chain saw making a hole in the tree, cleverly placed on the spine, foreshadows a turning point in the plot.  The two figures on the back will be revealed in one of the conversations.  Note the detail on the chain saw blade.

The opened book case is a peaceful scene in the forest.  Fallen trees have made a bridge over a brook.  Rupert is on the left side peeking from behind one of the logs.  On the opening endpapers as he walks along the top of the log, he speaks to readers about his hopes for a wordless picture book.  On the title page one of the geese from Mother Goose Bruce and Hotel Bruce is flying in an airplane pulling a sign with the title text.  The goose appears again on the closing endpapers, seated on the ground, in another woodland place with Nibbs and Thistle chatting about the book.

This book was hand-lettered by the author... And the images were rendered using scans of treated clayboard for textures, graphite, ink, and Photoshop.  Bold black lines but also tiny details are a signature style of Ryan T. Higgins.  He uses a full color palette in keeping with the setting of his story alternating between single pages, edge to edge, a single image loosely framed with white space, and two page pictures for heightened comedy.

The facial expressions and body postures of the characters enhance the humor.  There is never any doubt, regardless of the text, as to the mood of Nibbs, Thistle and Rupert.  When Rupert looks directly at the reader near the end, we know he has reached the end of his proverbial rope.

One of my favorite of many illustrations is at the beginning when Nibbs first approaches Rupert.  The two of them are standing on the log bridge over the brook.  We have zoomed in close to them.  Nibbs has his paws over his mouth horrified that he is talking about talking.  Rupert is assuming the hands-on-hips posture in disgust.  His book is already in jeopardy.


When I first read this book it was aloud as an F & G to a classroom of third grade students and their teacher.  We laughed ourselves silly.  Now in the possession of a hard copy of Be Quiet! written and illustrated by Ryan T. Higgins, it's funnier than ever, even after multiple readings.  The humor does not lessen.  Every classroom and school library will want at least one copy.  I highly recommend it for your personal collections too.

To discover more about Ryan T. Higgins and his other work please visit his website by following the link attached to his name.  At the publisher's website is a set of activity pages.  Ryan is interviewed at Jena Benton, Writer & Illustrator.  Matthew C. Winner, teacher librarian, chats with Ryan at All The Wonders, Episode 346.