Holding Happiness In Your Arms

There is at least one; one always there every single day offering constant comfort.  When you wake up in the morning it's the first thing you see and as you drift off to sleep at night, it follows you into your dreams.    It listens to all your conversations without passing judgment; agreeable to a fault.  It accompanies you wherever you go.  Each gal and guy has a toy, a doll or a stuffed animal supporting them through childhood. 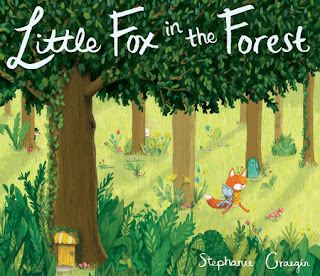 Regardless of the lifespan of this beloved object, the memory of its presence will endure forever.  In her authorial debut, illustrator Stephanie Graegin portrays the priceless partnership between a girl and her cherished toy.  Little Fox in the Forest (Schwartz & Wade Books, February 28, 2017) will make a forever mark on your heart; a breathtaking story without words.

A little girl snuggles in bed with her stuffed toy fox.  Leaving for school she places it on the shelf with her other stuffed animal toys and books.  During her day she thinks often of her fox.

Returning home the duo is inseparable.  Before taking it to show and tell she goes through a box of pictures; the fox is always with her.  After school she stops at the playground, leaving her fox safely tucked in her backpack.  As she swings she sees a real fox sneak away taking her precious pal.

She follows.  And her friend, a boy, gathers her backpack and goes after her.  They wander deep into the forest but can't find the fox carrying her fox.  Knocking on a tiny door at the base of a tree trunk a squirrel gives them directions.  Meanwhile, the fox dreaming of the wonders to be shared with this new friend has a bit of trouble too.

Stepping through the arch in a hedge the children enter another realm; a wondrous place populated by animals.  They seek the fox asking all for help.  A previous encounter by a particular bear aids in their efforts.  Kindred spirits display acts of generosity.


When you open the dust jacket a lush forest scene unfolds.  All the elements hint at events to come in the story, the fox running with the girl's toy fox, the door in the tree trunk and the weasel peeking from behind the tree.  To the left on the back the children are looking for the two foxes as other animals watch from behind trees.  A vest-wearing bear walks away from them in the opposite direction.  A rust-colored bird watches from within the tree branches.  This initial image is filled with delightful details.

On the book case covered in golden cloth, a portrait of the little fox from the forest is placed in an oval shape on the front.  The frame is formed of an array of leaves and flowers.  In shades of blue the opening and closing endpapers are a close-up of the shelf in the girl's bedroom.  Titles on the books hint of the adventure awaiting readers and the resolution.  They are identical except for one important object on the far right on the closing endpapers done in full color.

Rendered in pencil, watercolor, and ink and then assembled and colored digitally the illustrations by Stephanie Graegin appear as single pages, a series of square and rectangle panels on single pages, and for emphasis span two pages.  Until the little fox comes from the forest the color used is the same as the endpapers, hues of blue.  The little fox is in full color.  As the animals appear they are in full color also.  This contrast builds a gentle tension.  Readers know something wonderful is soon to be revealed.

Every time a page is turned you are invited by the exquisite parts of the whole to pause, forming the narrative in your mind.  You can envision the conversations through the facial expressions and body postures.  Your amazement grows until you gasp in surprise and then you finally release a soft sigh at the conclusion.

One of my favorite illustrations of many is when the little fox is running through the woods carrying the girl's fox.  The sneaky weasel wearing a black hat and black jacket is looking at him from behind bushes.  The little fox is dreaming of what joy his new friend will bring as they share a book together, have a tea party and dance.  This is shown in a large thought bubble.  The little girl did some of these same things with the toy.


The telling of this story, the theft, the journey, the discovery, the shared loved for a single toy and the understanding actions of the two, the girl and the fox, is beautiful.  Little Fox in the Forest conceived and illustrated by Stephanie Graegin resonates with readers long after it has been read.  It's one of those books you want to carry with you everywhere, like a beloved stuffed animal.  You will be asked to share this often and you will do so with pleasure.