Focus On The Hocus Pocus

The room is darker.  Did the sun go under gathering clouds?  Your dog is staring at you and whining.  Didn't you just take her outside?  Your legs are asleep.  When was the last time you moved?  You look at the clock startled to see it's hours later; the afternoon replaced with early evening.  You look at the object in your hand realizing you've been lost...in a book.  You were captivated and captured by the writing, setting, plot and characters.  They invited you into their world and there was nothing else you would rather do. 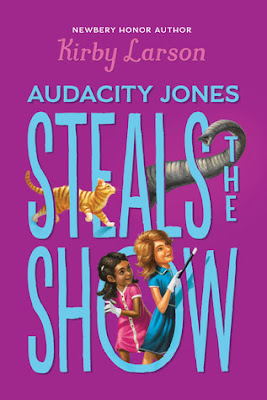 Little more than one year ago readers were introduced to a resourceful, determined and caring eleven-year-old orphan in Audacity Jones To The Rescue (Scholastic Press, January 26, 2016).  The second book titled Audacity Jones Steals The Show (Scholastic Press, January 31, 2017) written by Kirby Larson is as suspenseful and charming as the first in the series.  You simply can't stop reading it once you start.

If you, dear reader, have not this very day observed at least three instances of the magical, the mysterious, or the miraculous, do set this book down right away.  Find a story more to your disposition.  Perhaps something about chalk.

Chapter One
A Somber Ceremony

Audacity Jones peered around the corner, examining the great hallway of Miss Maisie's School for Wayward Girls with utmost care.
"Is the coast clear?" asked someone standing behind her.
"Clear?" echoed the three small voices belonging to the triplets.
Audacity scouted left and right.  Not a kid-leather boot nor starched pinafore to be seen in either direction.  The dozen other Wayward Girls were no doubt hard at work on the morning lesson.

Audacity and Bimmy just informed Lavender, Lilac and Violet of their plans to leave Miss Maisie's School for Wayward Girls to assist Cypher, now a member of the Pinkerton National Detective Agency, in his first solo assignment in New York City.  Next Audacity must convince Cypher of the need for Bimmy and Min, her constant companion and most unusual cat, to accompany her.  With all missions accomplished, Cypher, Audacity and Bimmy board the train to New York City.  Cypher forbid Min from going but resourcefulness is a strong virtue in this creature as is her ability to converse with other animals, even elephants.

As the foursome move toward their destination a citizen of the city is fretting in the early morning hours about an upcoming performance unlike any previously done.  He has employed a person of the highest scientific intelligence to assist in his next trick, the vanishing of a full-grown elephant.  Theo Quinn seems to be hesitant to reveal more than small portions of the idea at a time.  Harry Houdini has sought the services of a particular Pinkerton man to protect this Theo Quinn, the idea and Theo's silence for which he has paid a great deal of money.

Cypher's plan to have him, Audacity, Bimmy and Theo (a remarkable young woman to Houdini's surprise) pose as jugglers so they can be near Houdini at the theater puts them in the thick of the crowd of performers at their hotel and the Hippodrome.  It makes all their efforts more difficult especially when Theo disappears.  Someone wants Houdini to fail.  Someone will do anything to make this happen.

There are several other surprising threads woven into the main tapestry of this tale; an inheritance, a baby elephant, and an unexpected circus performance.  Audacity's ear buzzing is most welcome in assessing the veracity of villains Billy Bottle, Helmut, an elephant trainer, and one Wylie Wurmer posing as the Great Oberon, a famous magician.  A hazel-eyed street vendor, Bert, the theater manager and Jamie Doolan, assistant elephant trainer, work their own kind of miracles.

You literally cannot turn the pages fast enough to reach the resolution of not one, not two but three scenarios.  You find yourself holding your breath, waiting to see if each small piece falls into place.

"Look at this life---all mystery and magic.
---Harry Houdini


One of the first names which come to mind when you think of outstanding middle grade historical fiction is Kirby Larson.  Her ability to blend details of the past into her narrative is indeed magical.  You step back in time, soaking in the descriptions of specific scenes, the architecture, the clothing, the methods of travel and the way people spoke.

We flawlessly move from one character to another, chapter by chapter, adding to our knowledge of them and their place in the overall story.  Their thoughts and conversations disclose their personalities.  Each character, good and bad, is fully alive.  Enjoy these sample passages.

Billy Bottle watched from the shadows as Mr. Houdini parted company with Theo, possibilities scurrying through his mind like rats through a dark alley.  Houdini thought he was Mr. Muckety-Muck, did he?  Maybe he'd like to be taken down a notch or two.  And Billy was the man to do it.

What Billy heard when he eavesdropped through the vent weren't dull as dirt as Theo's conversations with all them scientist types.  This time he could almost follow the conversation, and it perked his spirits up considerable.


Bimmy tugged on the dark curl over her right ear.  "Oberon wasn't robbed."
"You see, I warned you about jumping to conclusions," Cypher said.
"Oberon wasn't robbed because that wasn't Oberon."  Bimmy put her hands in her lap.
Audie's fork clattered to her plate.  "What?"
Cypher closed his eyes, as if in prayer.  "Ladies, if I may---"
"Oh, this is so thrilling!"  Theo clapped gleefully.  "I must get out of my laboratory more often."
Bimmy glanced at Audie and then at Cypher.  "Do you remember in the cab I told you Oberon and I had performed in the same circus?"
"Oh, yes!"  Audie's eyes sparkled with the memory.  "He gave you a rabbit.  Which you set free in the woods."
"Clever girl," Theo approved.  "Animals deserve to live in their natural environments.  I myself once rehabilitated a small barred owl.  Though it does return to my window from time to time, it seems to have fully embraced its natural state.  Quite remarkable, really."
Cypher rubbed at his temples with vigor.  "This is all fascinating, but might we return to the subject at hand?" Keeping a conversation on track with these three was more difficult than herding camels!


Oblivious to the workers' hopes, the cat forged ahead, motivated by one reason only:  the sad aroma signaling her new friend, Punk.  She turned down a dark hallway, and down a darker set of stairs.  Ahead was an enormous door behind which bubbled a stew of animal scents, including that of the baby she sought.
With purpose, Min padded forward.
Only to be stopped by a snarling pair of Dobermans.


Rejoice readers!  Audacity Jones Steals The Show written by Kirby Larson is a page-turner extraordinaire.  The final four paragraphs will have you longing for another book in the series with the air thick with mystery.  In an author's note Kirby Larson explains this book in its historical context; no specific dates are mentioned in the narrative.  You will enjoy her acknowledgments too!

To learn more about Kirby Larson and her other work please visit her website by following the link attached to her name.  She further clarifies this book in a Friend Friday post.  Author Barbara O'Connor talks about this title on her blog, Greetings from Nowhere.
Posted by Xena's Mom at 1:02 AM