Surviving middle school is akin to surviving (and enjoying) life in general.  It's a testing ground for becoming who you want to be for the rest of your life.  Everything is under a microscope; magnified and scrutinized.  Cruelty walks the halls alongside compassion.  In surprising moments of utter clarity one will rise above the other. 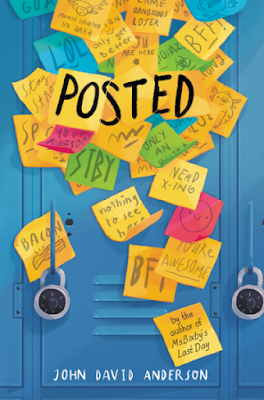 Eighth grade, the final year before moving to high school, is when those foggy things hovering in the background of our days move to the front and center, sharply in focus.  Posted (Walden Pond Press, an imprint of HarperCollins Publishers, May 2, 2017) by John David Anderson, author of Ms. Bixby's Last Day (Walden Pond Press, an imprint of HarperCollins Publishers, June 21, 2016) presents to readers two life-changing weeks for the members of the Branton Middle School community; specifically those of four plus one friends.  Those bonds, of the first four, forged over years are about to be measured.

I PUSH MY WAY THROUGH THE BUZZING MOB AND FREEZE,
heart-struck, dizzy.  It takes me a minute to really get what I'm looking at.

When you read these first two sentences of the two page introduction narrated by Frost, Eric Voss so named for winning a poetry contest, there is no turning back.  You are entirely attracted and attached to the story.  Frost takes us on a journey through the previous two weeks blending past episodes with present events.

When Frost came to this school a little more than two years ago due to his parent's divorce, his mother reassured him by saying

"It will be awkward at first, but it gets better.  You find your people and you make a tribe and you protect each other.  From the wolves."

Four guys, highly intelligent but different, find each other.  Bench, Jeremiah Jones, plays football, basketball and baseball but usually sits on the sidelines until there is nothing he can do to alter the course of the game.  Advik Patel, DeeDee, is a Dungeons & Dragons fanatic and collector of polyhedral dice.  He is never without a ten-sided dice, carrying it for good luck and rolling it to make decisions.  Wolf, Morgan Thompson, is a piano prodigy.  His nickname is shortened from Wolfgang Amadeus Mozart.  Frost is certain the other three will someday be sitting in the audience at Carnegie Hall listening to Wolf.

On a nothing-out-of-the-ordinary day in math class, Ruby Sandals (don't you dare call her Dorothy) is caught texting on her phone.  Of course, phones are not allowed in class but everyone uses them.  What makes this infraction grow from small to ginormous is what Ms. Sheers reads on the screen and the fact this is the final violation of many.  By the following Monday no phones are allowed in school...at all.  If there are special circumstances, they are to be turned in to the office where they will be held for the day.

Into this scenario walks Rose Holland, a new student.  Now Rose is a big girl, tall and muscular.  She's not afraid to speak her mind.  She's not afraid to ask if she can sit at the table with Frost, Bench, DeeDee and Wolf who have been sitting at that same table for more than two years during every lunch period.  Her presence there not just for one day but for each day thereafter, alters the dynamics of the group significantly.

With the absence of phones, middle-school student creativity grows to an all-time high.  No one can pinpoint how it starts exactly (it might have been DeeDee) but post-it notes, required school supplies, start to appear everywhere as a means of communication.  Unlike phones, the identity of the author is not always known.  The tone of the notes escalates from funny and friendly to vicious.

A lunchtime origami session, the introduction of The Gauntlet and Hirohito Hill, Mr. Sword's aphorisms, a spectacular play during a football game, and a night of re-arranging rules contribute to huge shifts in loyalties.  Another school policy rule heightens the stakes.  Then two huge instances of deliberate harassment bookending a contest bring readers to a poignant point.  Utter clarity.

When John David Anderson writes about middle school students it is with a thread of universality running through it.  No matter your age you completely comprehend every aptly described moment and interaction with the characters.  The staff members, the principal and the parents are familiar, like people you know.

For each of the twenty chapters Anderson uses only two word titles beginning with the word the; The Catalyst, The Tribe, The Variable, The Catch, The Bet or The Confession.  It's an art form.  It's amazing to read how incidents, conversations, thoughts and people build layer upon layer from the singular word.  Please enjoy the selected passages below.

People talk about nightmares where they are falling or where they are trapped in a burning building or buried alive.  But ask any incoming sixth grader with at least two forehead zits and a Great Clips haircut and he will tell you the prevailing image from his nightmares is standing in the middle of a buzzing cafeteria, tray in hand, desperately looking for somewhere to sit.  That was what made me sweat through my sheets at night.
Forget the bogeyman; the lunch lady haunted my dreams.

We all need something that's ours.  A thing that we know absolutely about ourselves that others can only guess at.

We started walking toward the playground where our bikes were racked, the swings and slides full of carefree kids, little ones who didn't need a tribe yet because when you're five, everybody's a member.

What made it unique was the battleground.  Every skirmish took place on three square inches.  Sticky notes were the weapons and words were the ammunition.

"Turds," he said.
"Huh?"
"Cheetos.  The look like turds.  Little cheese turds.  Especially the stubby ones.  I never noticed that before."  He was sitting cross-legged on his bed with a copy of X-Men #25 spread out in front of him.  The one where Wolverine has his adamentium sucked out of his pores by Magneto.  Brutal stuff.  Good stuff.  I looked at the Cheeto like it was some divine artifact worthy of a museum.  He wasn't wrong.  They did sort of look like that.  I'd always imagined them more as tree roots.
"When I was little I thought they were supposed to look like toes.  Cheese-toes.  Except they left off the s," Wolf said.
"I'm pretty sure nobody's toes look like that," I said.
"I think my grandmother's toes probably look like this."
He popped the crunchy cheese turd in his mouth and started chewing.
"And I'm pretty sure you have now ruined Cheetos for me for life."
Wolf gave me a giant grin with bright orange mush smeared across his teeth.

To learn more about John David Anderson and his other work please follow the link attached to his name to access his website.  You can enjoy the first five chapters here.  Click on Start Reading Now!

John David Anderson is the author of Ms. Bixby's Last Day, Sidekicked, Minion, and The Dungeoneers.  A dedicated root beer connoisseur and chocolate fiend, he lives with his wife, two kids, and perpetually whiny cat in Indianapolis, Indiana.  This picture is of John David Anderson after he survived middle school.