It happens again in seventeen days.  Every living thing around the world waits in anticipation.  Unlike so many variables in our day to day lives, it's dependable and predictable.  It wields an influence that is undeniable. 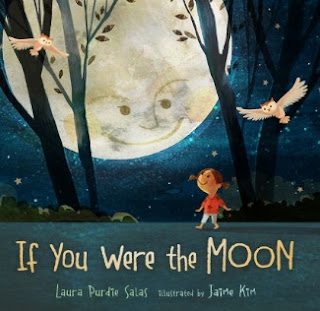 Classical music, song lyrics, artwork and photographs all pay tribute to Earth's satellite in its many phases but a full moon casts a spell over our planet.  If You Were the Moon (Millbrook Press, a division of Lerner Publishing Group, Inc., March 1, 2017) written by Laura Purdie Salas with illustrations by Jaime Kim presents fascinating features about this celestial body.  When it shines its brightest next, you will gaze upon it with increased understanding and respect.

A big, bright full moon shines in a little girl's window.  She believes the moon does nothing at all and that's exactly what she wants to do.  The Moon replies in fourteen melodic sentences when linked together make a beautiful ode.  Each line leads to an explanation of the importance of the moon and its role in her life.

The moon really is a chip off the old block having been formed when a large meteorite struck Earth billions of years ago.  Its presence keeps Earth steady enough so temperatures don't shift to the extreme.  We never see the dark side of the moon because spin speeds of the moon's axis and orbit are identical.

You'd be filled with craters too if space rocks were constantly hitting your surface.  We see different parts of the moon because of its position in relation to Earth and the sun.  Do you know why the moon casts light?

Our oceans rise and fall on tides dictated by the moon's gravity.  The moon signals a multitude of animals to begin their nocturnal activities.  The only two places in space humans have walked are planet Earth and the moon.  On May 10, 2017, our next full moon, remember to offer thanks for it doing much more than nothing.


Knitting poetic phrases together with facts Laura Purdie Salas has fashioned a nonfiction narrative which evokes the same sensory experience as the moon does upon the world.  It's as if a full moon is lighting the way as we read her words.  She brings the story full circle with the little girl wide awake and soothed to sleep at the end.  Here is one of the phrases with supporting information.

Light a pathway to the sea.

When sea turtle eggs hatch onshore, the hatchlings instinctively scurry toward the brightest light.  That is usually moonlight sparkling on the ocean, calling the tiny turtles to their home in the sea.


The scene depicted on the opened, matching dust jacket and book case is like stepping into the marvelous, magical quiet of a full moon night.  It flawlessly extends over the spine with more grass, shrubs, and tree trucks stretching into the inky blackness with a few stars.  You know the girl and Moon have a special connection.  It looks as though they are about to start a conversation.  The pair of owls completes an excellent design.

The opening and closing endpapers are the same shade of color as the author and illustrator text.  One of the charming interior images is used on the title page.  The illustrations throughout rendered in acrylic paint and digital techniques by Jaime Kim each span two pages; one for each poetic phrase.  The darkness is softened by the light of the moon.

Altered perspectives showcase the narrative and supply pacing.  The facial expression on the moon and Earth heighten the kinship between the two.  Kim's interpretation of the text is wonderful; the moon's orbit extending into hands holding Earth steady, a series of ballerinas spinning on an axis, and throwing sunlight on Earth.  The elements she includes and the emphasis she places on them is outstanding.

One of my favorite of many illustrations is the explanation of the moon's gravity.  Beneath the star studded sky is the vast ocean.  Eyes closed as if in concentration the smiling moon is placed on the right side, filling half of the page.  To the left a whale breaches.  It's easy to imagine the quiet of the night broken by the splash.


No matter how many times you read If You Were the Moon written by Laura Purdie Salas with illustrations by Jaime Kim you will feel like it's the first time.  The combination of the poetic phrases and pictures along with the informative text makes the experience of reading this book a sensation for your senses.  A short glossary and suggestions for further reading are included on the last page.  I believe this title should be placed on your professional and personal bookshelves.

To learn more about Laura Purdie Salas and Jaime Kim and their other work please visit their websites by following the links attached to their names.  At Laura Purdie Salas's website there are resources for teachers for this title.  Laura is interviewed about this title here.  Jaime Kim has Tumblr pages.   You can learn more about Jaime at Painted Words.  Jaime Kim was a guest at author, reviewer and blogger Julie Danielson's Seven Impossible Things Before Breakfast in 2014.  You can view interior images at the publisher's website.