Nearly every culture has a trickster as a character in their traditional tales.  Anansi, a spider, is found in West African folklore.  It is believed he tricked the Sky God into giving up the box which held all stories. Originating from China the Monkey King is known to be superhero as well as one able to create considerable chaos.  Brer Rabbit is a well-known figure in African American stories besting through cunning those larger and stronger than he is.  Several Native American tribes share stories with Coyote as the trickster.  In the Northwest section of the United States Raven is strong and through his cleverness brings about change; sometimes for the good of people according to narratives in the Native American culture. 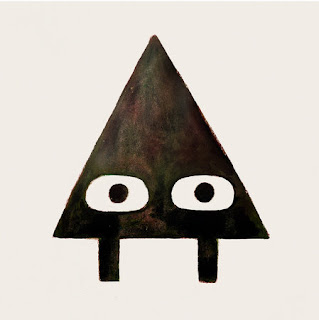 There are two fresh faces to be added to the chronicles of fictional mischief makers.  Triangle (Candlewick Press, March 14, 2017) written by Mac Barnett with illustrations by Jon Klassen will have you looking warily at basic shapes.  Who knew they were such rascals?  (Where were they when I was struggling in geometry?)

Triangle is a no-frills character with a wide-eyed expression and two legs to give him mobility.  As you might expect his home is in the shape of a triangle.  His door, a triangle, allows him ease when coming and going from his abode.

He is on a mission today.  He is on his way to Square's home.

He was going to play a sneaky trick on Square.

He treks through varying sizes of triangles, through a place with odd, rounded shapes and into the land of squares, large squares, middle-sized squares and little squares.  It is a mirror version of the realm of triangles.  He finally arrives at Square's square house.

Square, like most of us, has a fear.  He does not like snakes.  Triangle knows this, so he pretends to be a snake outside of Square's doorway (which is in the shape of a square).  Triangle's hissing is causing Square to panic and shout.  Triangle can't contain his laughter any longer.

When Square realizes Triangle has played a prank, he gives chase.  They sprint right by all those squares.  They rush by all those odd, rounded shapes.  They zoom past the triangles until Triangle escapes into his house.  What happens next leaves readers with a point to ponder after they try to stop laughing.


The simplicity of Mac Barnett's text in this story is what heightens the comedic effect.  The repetition of the words triangle and square help the suspense to grow.  You know something is going to happen; something big and hilarious.  The beauty of it, at least for this reader, is it's a completely marvelous surprise.  Here are two sentences.

He walked past shapes that weren't triangles anymore.
They were shapes with no names.


When you first hold a copy of Triangle in your hands you know you are about to experience something exceptional.  There is no dust jacket.  The book case is thick like a board book and has a smaller trim size, perfect for the intended audience. To the left, on the back of the case, is Triangle's back with words designed to make readers eager to open the book and start reading.  The opening and closing endpapers are a pale, mint green.

On the first creamy white page a little version of Triangle is giving readers a one-handed wave.  The publication information is in the shape of a triangle on the verso page.  Beneath the text on the title page, Triangle is on the move.

Jon Klassen rendered these images digitally and with watercolor and graphite.  The generous use of white space allows for the pictures to produce utterly perfect pacing.  Klassen shifts his perspective to heighten our anticipation in addition to giving us an idea of the size of the setting in which the two friends live.  Klassen's eyes on his characters tell whole stories.  Every time I see the single picture hanging on the wall of Triangle's and Square's houses, I burst out laughing.

Two of my favorite of many pictures are without words.  It's right after Square discovers Triangle has played a sneaky trick on him.  On the right Square's scene is the same as the previous page.  His eyes are looking left as he stands outside of his home.  On the left Triangle's page is nearly the same as the previous page but he is to the left of the small flowers.  He is edging off the page.  He is ready to run.


The more you read this book the more you will laugh.  I have lost count of how many times I've read Triangle written by Mac Barnett with illustrations by Jon Klassen.  The blend of pictures and words supplies over-the-top humor.  You will also be thinking non-stop trying to determine the answer to the final question.

To learn more about Mac Barnett and Jon Klassen and their other work please follow the links attached to their names to access their main online presence. Several publishers' websites have interior images for you to view.  They are here, here and here.  At the Candlewick Press site you will find several extra items to use; an article with the creators discussing the title and an activity kit.