The arrival of the mail every day is a neighborhood event.  After the postman's little truck stops and starts and stops and starts at every mailbox and finally leaves one street to make deliveries down another, front and side doors on houses open with residents walking out to see what was left for them.  You can pretty much determine the contents from their body postures as they return to their homes. 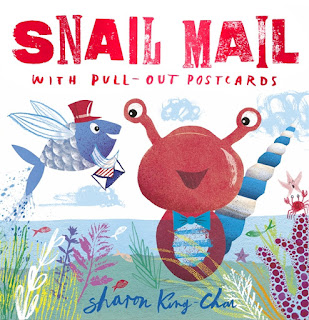 An enduring favorite on elementary school library shelves are The Jolly Postman and The Jolly Christmas Postman written by Allan Ahlberg with illustrations by Janet Ahlberg.  So well-loved are these books they are continually being replaced and multiple copies are a part of the collection.  Children love to open the envelopes, look at what is inside and read them over and over.  SNAIL MAIL With Pull-Out Postcards (Hodder Children's Books, September 8, 2016 UK, Hachette's Children's Books, April 4, 2017 US) written and illustrated by Sharon King-Chai is a charming, colorful ode to waiting for the delivery of news from a missed companion.

Hi there! I'm SAM, the Seashell Snail.  I live by the seashore.

Sam has a mama, a papa, a brother named Tiger and several starfish and crab friends.  He also has a Teddy bear.  This family is anything but slow, loving one adventure after another.  On this particular day, Tiger is off on a special trip.  He gives Sam his word he will write to him every single day because Sam loves

On Monday Postman Perry brings a yellow, green and black envelope to Sam.  Tiger has written clues on the outside of the envelope asking Sam to guess where he is.  When Sam opens the envelope he pulls out a postcard with BRAZIL in the corner.  A turtle, eel, whale, dolphin and Tiger are dancing the Samba.  In his chatty message to Sam, Tiger talks about the Carnival.  A stamp in the upper, right hand corner highlights one of the new Seven Wonders of the World found in Brazil and another features the country's favorite sport.

Sam's family dons their floats and dances on the waves as his friends do the same underneath them.  On the next day, Tuesday, during seahorse racing Postman Perry presents another envelope to Sam.  Clues on the outside lead to AMERICA.  Tiger is thrilled to be playing with a band called ROCK and SOUL.  Not wanting to miss out on any of the fun, Sam and his friends form their own musical group.

The envelopes and postcards come on Wednesday, Thursday, and Friday.  Each day Sam learns about a new country and what you might see there but on Saturday Postman Perry does not come.  Did something happen to Tiger? Sam is about to get the surprise of his happy life.


The words selected and used by Sharon King-Chai form simple sentences easily understood by the intended audience.  Each of the family members introduces themselves in speech bubbles.  Otherwise Sam is narrating the story.  To demonstrate the active lifestyle of this family of snails whenever the mail is received they are engaged in an activity.  After Tiger's postcard is read, they try to duplicate what he has done.  Not only are readers learning the days of the week but they also tour to five other countries, learning greetings in their language.  Here is another sample passage.

On Thursday, I'm rock climbing when Postman Perry delivers my fourth SNAIL MAIL.
KITES! What a good idea.  We make our own and spend the day flying them...
higher
and
higher!
OOPS!


When readers open the book case they are welcomed with two different bright and cheerful images.  On the back, to the left, is the publication information on a canvas of vivid blue.  The snail family and a starfish surround the text along with a splash of water.  The postal colors of red, white and blue extend from the front, over the spine and to the back.  The text is done in red foil on the front and spine.  Just look at the joyful faces of Sam and Postman Perry!  You know good things are going to be found in this book.

On the opening and closing endpapers Sharon King-Chai has drawn a map of the world.  She includes papa, mama, Tiger and Sam as well as those friends Tiger meets in his travels.  For every country he visits she has written a salutation in their language.  At the bottom framed and in capital letters is

Each time a word is written in capital letters it appears to have been stenciled letter by letter, by hand.  Many of the images span two pages.  Single page picture stretch edge to edge or are framed in generous amounts of white space.  The envelopes are secured to vibrant backgrounds in keeping with the county from which they have been sent.

Rendered in mixed media the illustrations are replete with lively details and some are quite humorous like the seagull flying over a starfish and leaving a dropping on its head.

The snails are paper cut outs, layered and juxtaposed with a variety of marks created in ink, paint, pencil, potato stamps, leaf and seaweed prints, photography, collage and digitally manipulated.

Papa born in France has a mustache and wears a beret.  Mama wears a white ribbon in a bow.  Both Sam and his Teddy are wearing blue bow ties.

One of my many favorite illustrations spreads across two pages.  The text is placed on a narrow white border at the top.  Notes swirl in the rockpool as a crab, starfish, seahorse and Sam make music.  Sam is wearing large square sunglasses.  The crab, starfish and seahorse might be mirroring other rock stars.


SNAIL MAIL With Pull-Out Postcards written and illustrated by Sharon King-Chai is sheer bliss.  Readers are guaranteed to love opening the envelopes and reading the postcard messages.  The information found on the postcard in the note and on the stamps is sure to prompt more research on those named counties.  I would plan on multiple copies.

To discover more information about Sharon King-Chai and her other work please visit her website by following the link attached to her name.  At her website is a link to her Etsy shop.  This title is showcased at the North Somerset Teachers' Book Award website.
Posted by Xena's Mom at 8:05 PM