It's hard to believe six days have passed since December 25, 2016.  It will be another three hundred fifty-eight days until the next Christmas celebration.  Surely the time will pass quickly with months, days, and hours filled with the expected and unexpected.  While you are waiting for this holiday to approach there is a title you need to consider reading. 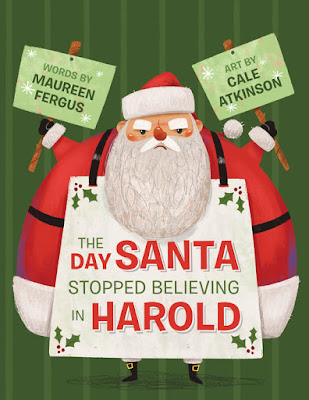 We can all agree laughter is truly an antidote to many things, not all but most. When the jolliest elf of all is in a grumpy slump something needs to be done.  The Day Santa Stopped Believing In Harold (Tundra Books, a division of Random House of Canada Limited, October 11, 2016) with words by Maureen Fergus (Buddy and Earl, Buddy and Earl Go Exploring) and art by Cale Atkinson (To The Sea and Explorers Of The Wild) is the ticket to hilarity.  There is a ton of trouble at the top of the world.

One stormy night close to Christmas, Santa and Mrs. Claus were sitting in their cozy little log cabin at the North Pole.

Instead of going over the line-up of reindeer on his team, Santa was sad and sulking.  Mrs. Claus repeatedly asked Santa what was wrong before he finally admitted the truth.  He no longer believed the boy named Harold existed.  He believed Harold's parents were trying to trick him into thinking the child was actually real.

To say Mrs. Claus was shocked was an understatement.  Santa began his list of reasons noting the letter to him appeared to have been written by Harold's mom.  He then went on to point out the late night snack for him.  Santa was certain Harold's dad had left it for him.  As he grew more adamant, Mrs. Claus made a very valid point.

When the news of Santa's quandary swept through the toy departments, the elves were stunned.  Merpin, the Elf Supervisor in the Computer Gizmo Department was no help whatsoever.  Santa set off to seek the counsel of his reindeer.

As Santa laid out the facts of the matter, his team listened in silence.  Finally Donner stated the obvious.  There had to be proof.  At this point the story switched to Harold's home where a similar situation was unfolding.  Harold had a plan.  Santa had a plan.  Neither one of them planned on the results.


As soon as you read the words

Santa was supposed to be going over the roster for this year's sleigh team.
Instead, he was moping.

you know something is amiss. Santa simply does not mope but Maureen Fergus has a knack for bringing a humorous new viewpoint to what we believe to be true.  It's this comedic contrast which propels the story through all its surprises.  With careful, honest and insightful conversations we gain perspective on the issue at the North Pole and in Harold's home.  Here is another passage.


The grouchy looking Santa carrying and wearing signs on the matching dust jacket and book case is uproariously funny.  His BIG round body and tiny feet and hands plus the look on his face are sure to cause bouts of laughter.  On the back, to the left, we get the rear view of the same image.  On the back of the sign it says

I WANT TO BELIEVE

in Santa's Workshop with Photoshop.

The opening and closing endpapers in a matte-finished paper are identical to the pattern on Santa's shirt under his red coat.  It's a lively print in reds and greens with stripes, diagonals, snowmen, hearts, stars, dots and squares.  Much of the background canvas is a faint stripe pattern like wallpaper.  Prior to the title and verso pages, we see Santa's cat playing Scrabble with Harold's turtle.  Foreshadowing.  The dedication and title page information is placed inside Christmas tree ornaments.

Atkinson alternates between double-page pictures, single page images or a group on two pages to show the passage of time.  His details are marvelous; a bucket of coal next to Santa's fireplace, Mrs. Claus wearing reindeer slippers, Santa drinking hot chocolate from a cup with a Santa-hat-wearing narwhal on it, and Mrs. Claus's skirt covered in holly outlines.  The facial expressions on all the characters' faces are absolutely spot-on.

One of my many favorite illustrations is Harold in his bedroom.  On the background canvas in blue on blue is a series of miniature robots.  His bed is covered in a purple spread with a purple pillow.  On the floor are several Santa Claus books and a picture of Santa's face surrounded by question marks.  On the wall are a bunch of clues connected by string.  Harold, minus a front tooth, is reading a copy of Santa Enquirer.  His turtle is next to him, smiling.


Be sure to get a copy of The Day Santa Stopped Believing In Harold words by Maureen Fergus and pictures by Cale Atkinson to add to your Christmas collection.  Readers young and young at heart are going to get lots of chuckles out of this story.  It's good to know even Santa can have doubts.  It makes him all the more believable.

To learn more about Maureen Fergus and Cale Atkinson and their other work please follow the links attached to their names to access their websites.  Cale Atkinson also maintains Tumblr pages.  You can get a glimpse inside the book at the publisher's website.
Posted by Xena's Mom at 12:33 PM