For more than forty-eight hours snow fell steadily.  Most of the area was under a warning or advisory.  This morning they were lifted.  Hundreds of schools throughout the state of Michigan are closed for today.  Everything is blanketed in white.  Winter is officially nine days away but a look out the window shows otherwise. 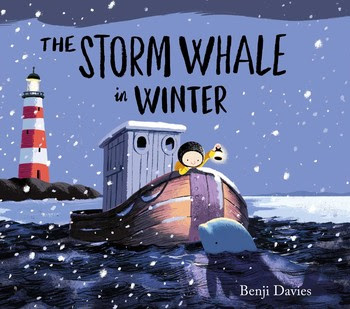 Changes in the weather can shift slowly or quickly without warning.  In The Storm Whale (Henry Holt And Company, September 30, 2014 US) we met Noi who lives with his dad, a fisherman, and their six cats by the sea.  A wild weather night delivers a small whale from the sea to the nearby sandy beach.  As a result we read of a compassionate son who is loved equally by his father.  The Storm Whale in Winter (Simon And Schuster, September 22, 2016 UK, January 24, 2017 US), a companion title, written and illustrated by Benji Davies reminds us that acts of kindness are always remembered.

Noi lived with his dad and six cats by the sea.
Last summer, Noi rescued a little whale after a storm washed it ashore.

Noi remembers this whale, this found friend.  On his daily beach walks he looks for this whale.  He hopes to see him again.

One snowy morning Noi's father leaves their island for one final day of fishing.  As night comes, Noi's dad has not returned.  The little boy is worried.  He looks through the falling snow from their home out to the sea.  He waits.  What's that?!  Something is there.  Noi knows it must be his dad.

Making sure their cats are snuggled inside, Noi leaves to greet his dad.  He takes his boat but the water is frozen solid.  Leaving it on the shore, lantern in hand, Noi sets out across the ice.  In the falling snow everything looks the same.  Noi realizes he is lost.

Far ahead he sees something.  Later Noi feels something.  His heart surges with hope.  Friends always find a way.


There is a special quality to the narrative when Benji Davies writes.  You get the one-on-one feeling as if he is telling a tale to you and you alone.  It's a feeling of comfort and possibility.  Every word is carefully chosen in his spare but meaningful text.  The use of dialogue in one particular point of this story intensifies the emotions of the moment.

Now and then he thought he caught a glimpse
of the whale, its tail tipping the waves in the distance.

But it was always something else.


When you open the book case left to right, the scene on the left is from an interior piece.  It shows Noi, net in hand, scanning the sea from the beach in front of his home.  His father sits outside on an overturned trap mending a net.  One of their cats sits near him and another is perched on his shoulder.  Snow covers the roof tops and portions of the beach.  The front, on the right, is a blend of the events in the book, showing us what might unfold in the story.  It promises us a nighttime adventure.  The opening and closing endpapers are a steely blue pepped with snowflakes.

Opposite the formal title page on the verso, we see Noi in his room in the peak of the roof, busy at work making another picture of his friend, the whale.  On the wall are snapshot drawings of highlights from the previous book, drawn by Noi.  You can see he gets his light at night from candles placed around the room, one in a lantern hanging from the rafter.  A single sock hangs over the heat register and another hangs on a line stretched across his room.  Two cats are keeping him company, one watching the sea through the window.  All these little details make the work of Davies extremely engaging and endearing.

The illustration sizes vary from double-page pictures, to single page images, edge to edge, or pictures framed in large portions of white on a single page.  Davies shifts his perspective bringing emotion into the scenarios as when Noi strikes out across the ice.  We watch him as if we are above him. (In one visual we are below him.)  Davies' use of light creates striking visuals.

One of my favorite of many illustrations is at night when Noi is watching for his dad's return.  There are several other seaside homes to the right and slightly behind Noi's home. He is looking out the window of his bedroom.  One cat is peeking out next to him. A light glows in the background.  Snow is falling.  You can see the small snowman in the shape of a cat on their deck railing.  The many shades of blue, gray and black contrast beautifully with the snow and small bits of yellow.


The Storm Whale in Winter written and illustrated by Benji Davies is an outstanding companion to the earlier title.  It's the kind of tale to add warmth to any day but particularly welcome in this winter season.  Friendship does not forget and love endures.  You need to have this title and the first one on your professional and personal bookshelves.

To read more about Benji Davies and his other work please follow the link attached to his name to access his blog.  Davies also maintains a Tumblr account.  You can view six interior images at a publisher's website.  There is a post at Bright Group about this title and an interview with Benji Davies.