Look To The Sky Again

When we get caught up in the seemingly normal busyness of our days and nights, it is easy to pass by something out of the ordinary.  We are going in a rush but as our mind focuses on what we saw, heard or smelled we literally put on the brakes wondering if what we just experienced could possibly be true.  It's like when you go out with your dog in the early hours of the morning, slightly past midnight, and the sky suddenly explodes in color.  It's so unexpected you can't believe it's real but the display of northern lights is a wonderful truth. 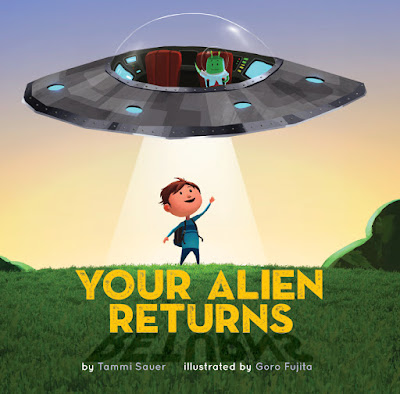 If an extraterrestrial happens to crash his ship in your yard, you might feel as though you are dreaming but this is exactly what happens in Your Alien (Sterling Children's Books, August 4, 2015) written by Tammi Sauer with illustrations by Goro Fujita.  A fast friendship is formed between the human boy and the small green alien child.  Fortunately for readers the best buddies are reunited in Your Alien Returns (Sterling Children's Books, October 4, 2016).  Space contains no boundaries when love fills two hearts.

When you least expect it, something special will get your attention.

Your alien will be back.

Can you imagine waking up to see your extraterrestrial pal peeking in your window, wanting you over for a playdate?  Of course, you ask your parents for permission.  As usual they are perfectly preoccupied.

You gaze out of your alien's ship as you whiz through space and past planets, barely able to contain your excitement.  On your arrival, like a good host, he offers you a snack.  One you eat with relish, the other, more alive one, you decline.

You present your favorite toys to one another, resting afterward in an otherworldly fort.  Meeting his playmates is a bit overwhelming; there are a lot of them. You do your best to fit it, but you feel like a failure.

Your forever companion, your alien, he knows you better than you can believe.  Quick as a wink he changes inward groans to outward grins.  This is what friends do for friends, no matter where they live.  That night after you have related the events of the day to your patient (but unbelieving) parents, a look out your window yields yet one more surprise.


By using a second person point-of-view, Tammi Sauer allows us to be up-close and personal with every moment of this story.  We can easily become the boy or his alien.  This style of narration connects us more deeply to the emotional impact of the interactions between the friends.  It's as if we are experiencing everything in real time.

Not only will her use of language in writing this tale touch your heart but it will also tickle your funny bone.  She leaves room for illustrative interpretation when the boy checks with his parents about leaving the planet with his alien friend or when a snack with lively eyes is offered by the alien.  Each sentence carefully builds to bring readers back to the beginning but we like the boy and his pal, are far richer than we were.  Here is a sample passage.

Your alien will show you around his neighborhood.
Some things will remind you of home.
But other things will be completely new.


When you open the matching dust jacket and book case, a full image spans from the left to the right.  As the sun rises over the rolling landscape of the boy's yard, his friend hovers above him ready to take him on a ride to remember.  As in the first title, if you run your hands over the title text you will feel its nubby texture.  The boy and the spaceship are also slightly raised.  On the back, to the left, placed in the lightening sky are the words

AN INTERPLANETARY PLAYDATE BETWEEN
BEST FRIENDS WHO LIVE WORLDS APART.

You simply can't help but smile at the opening and closing endpapers created by Goro Fujita.  Between the two eighteen pictures of the alien engaged in fun activities on his home planet appear on a black canvas.  A few of the pictures show him with a helmet on his head as he rides on a rocket-propelled skateboard, or as he snacks on scoops of geometric ice cream, tongue ready to taste, kneels to look at a creature in a fish bowl which looks similar to a favorite treat, soaks in red goo and twirls a wand like a giant sparkler.  On the verso and title pages, the alien is zooming between planets, a smile on his face as he travels to Earth.

Rendered in Adobe Photoshop these visuals span one or two pages, full of life and light.  Sometimes Fujita will place two or three loosely framed images on a single page to emphasize a point.  In particularly strong emotional sequences we are near the characters' faces.  Every mood of the duo is conveyed with truth and excellence.

One of my many favorite illustrations is when the boy is requesting permission from his parents to travel with his alien.  It takes place in the kitchen of his home.  His mother is shielding herself from a geyser shooting from the center of the sink.  His father is tinkering with the plumbing under the sink.  Puddles of water can be seen in the sunlight on the floor.  Behind the talking boy, the alien is peeking around the corner from the hallway.

Your Alien Returns written by Tammi Sauer with illustrations by Goro Fujita clearly shines a light on the soul of friendship.  Differences in appearance, food, games, customs and where you live don't matter to friends.  The most important thing is each other.  This is an uplifting tale and a stellar companion to the first title.  You will be asked to read them both over and over again.

To discover more about Tammi Sauer and Goro Fujita please follow the links attached to their names to access her website and his blog.  At Tammi's website she has an Alien Activity Kit for you to use with both books.  Fourteen interior pages can be viewed by following this link.  KidLit 411 chats with Tammi Sauer.  PictureBookBuilders showcases this title.  In the autumn of the year of the summer release of the first book, Emily Yarrow created a Your Alien song.