In A Little Town In Bethlehem

It's the day and evening before Christmas Eve 2016.  It would be a fairly accurate estimate to say I've read or had the Nativity story read to me several hundred times.  Although different interpretations by a variety of authors and illustrators shed new light on the heart of a religious and holiday celebration, the essence remains the same.  It was and is an unprecedented event. 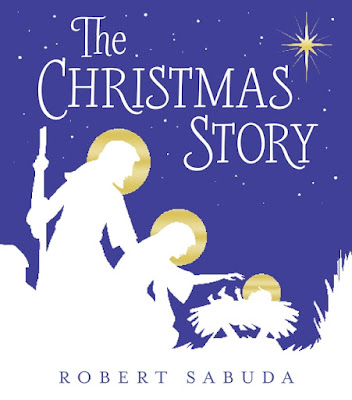 On my personal shelves is a small collection of pop-up books, numbering just over thirty.  Half of them have been engineered by Robert Sabuda.  This year his newest entry honors The Christmas Story (Candlewick Press, September 27, 2016).  It's a luminous presentation in both images and text.

LONG AGO, in the town of Nazareth, there lived a young woman named Mary.  She was soon to marry a carpenter named Joseph.

Mary was visited by an angel with news, unexpected news.  She was to give birth to the Son of God.  Faithful to the Lord she humbly replied,

"I am the servant of the Lord."

After Mary and Joseph became husband and wife, they had to make a long journey to the town of Bethlehem, birthplace of Joseph.  A census had been ordered by Caesar Augustus.  With so many people traveling to Bethlehem for the counting, by the time the young couple entered the city, all places of rest and refreshment were full.

They spent the night in a stable.  Joseph made his wife as comfortable as possible on a straw bed.  She gave birth to a son surrounded by the animals lodged in the humble shelter.  Nearby angels came to a group of shepherds caring for their flock.  They announced the birth of the child in Bethlehem. Far away a bright star guided three wise men.  They sought a King.

The shepherds arrived.  The three wise men found the stable delivering their gifts of gold, frankincense and myrrh.  Mary and Joseph were astonished but the words of the angel sent by God resonated within their hearts.  This was a night unlike any before or after.

For each of the six displays Robert Sabuda has engineered they are accompanied by beautifully worded paragraphs.  In most of them Sabuda has included exact Biblical quotes.  He draws attention to the human element.  He makes this extraordinary event accessible to readers of all ages.  Here is a portion of one of the paragraphs.

Mary wrapped the baby in a warm blanket,
and Joseph laid him in a manger filled with
fresh, sweet hay.

On the front of the book the circles of light around Mary, Joseph and the Child as well as the star are embossed in gold.  Along the spine the Star shines in gold foil above the title also in foil.  The contrast of deep rich royal blue with the pristine white is striking.

With a page turn a pale blue background highlights an angel in the upper, right-hand corner, wings spread.  Gold trims the neck, sleeves and waist of the angel's attire.  Mary, on the left, looks from one of two arched windows.  Doves are present.  Jars hold small growing trees.  With this first scene we are reminded of the masterful talent of Robert Sabuda.  His intricate details are nothing short of amazing.

When you open the pages a vista or a small vignette rises in front of your eyes; the hills and rolling sands of the desert landscape with buildings in the distance, animals peering at a man, woman and child or three men riding camels with a star reaching high above them.  Gold foil has been placed on portions of all the pictures for emphasis.  The backgrounds are different in all of the depictions.  Unlike the majority of the elements done in white, the clothing worn by the three wise men is a textured pearl color.

These six portrayals are all stunning but one of my favorites is the angels visiting the shepherds.  Eight sheep rise on the dusty green canvas on the left.  On the right two shepherds kneel in front of their fire.  A sheep is to the left of one of them.  Three angels, two playing instruments, speak to the men.  The angels have been placed above a swirl of clouds.


The Christmas Story interpreted and portrayed in a glorious array of pop-up pictures by Robert Sabuda is a book you will want on your personal shelves as a title to be shared every year.  As I have done in my professional collections in the past I would recommend its inclusion.  These books are well-loved quickly but they are most appreciated.  I thank Robert Sabuda for this title and for Candlewick Press for its publication.

To learn more about Robert Sabuda and his other work, please follow the first link attached to his name.  The second link takes you to a page his devotes to the making of pop-ups.  You can also further acquaint yourself with Sabuda through this NCCIL essay, an interview at Best Pop-Up Books, Four Questions for ... Robert Sabuda at Publishers Weekly, a video interview at Reading Rockets and a guest appearance at All The Wonders, Episode 308 with teacher librarian Matthew Winner.