Oh, if only we could speak the language of animals.  The conversations would be lengthy and informative.  They probably have a separate set of rules for any number of situations.  We, of course, have no clue as to the dos and don'ts in their realm. 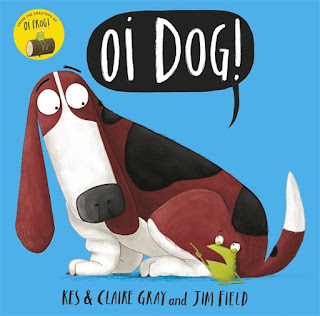 Apparently there are particular places where specific animals are supposed to sit as we learned in Frog On A Log? (Scholastic Press, an imprint of Scholastic Inc., August 25, 2015) written by Kes Gray with illustrations by Jim Field.  At the conclusion of that title the frog was in a less than comfortable position.  You could say he was in a difficult state of affairs.  In a sequel Oi DOG! (Hodder Children's Books, July 28, 2016, UK) authors Kes Gray and Claire Gray collaborate with Jim Field as the frog airs his dissatisfaction with the rules.

Oi DOG!
GET OFF THE FROG
said the frog.

"But I like sitting on frogs," said the dog.

As the dog explains why his posterior likes to be placed on frogs, the know-it-all cat, sitting on a mat, chants the litany of rules.  Well, frog is having nothing to do with those particular decrees.  He's changing them.  Dogs will sit on logs.

"Bears will sit on
stairs."

When dog asks about slugs, frog gleefully gives an answer for them, flies, crickets and moths. Each time dog asks, a reply, no matter how strange, is issued with the speed of lightning.  When dog points out whales might not like where they have to sit, frog authoritatively answers much like cat did in the past. (Oh, oh.)

Nine more animals are issued new directions for their state of sitting.  This leads us to one final question.  As the now king of commandments, frog's response and action break all the rules.  (Prepare to burst out laughing.)


With all the utterly ridiculous rhymes penned by Kes Gray for this title, it's hard not to imagine bouts of loud giggling coming from his writing room.  You will find yourself wondering if he thought of the animals first or the objects upon which they are assigned to sit.  And speaking of animals we have those from the forest, the jungle, the insect world, African grasslands, domestic and wild types from the same family, the largest and the smallest, and even one from fantasy.  Here's another passage.


When you contrast the frog pointing an accusing finger at the dog on the front of the opened book case (There is no dust jacket.) and the dog's startled look, you know this book is going to be as full of humor as its predecessor.  To the left, on the back, a decidedly disgruntled cat is grumpier than ever at where he is now sitting and probably because of losing his rule-setting status.  For the opening and closing endpapers, on a rusty orange background, the dog is posed in fifty-four small, captured actions certain to have readers howling at their hilarity.

On the verso the shocked dog is looking straight at the reader.  With a page turn we move in close to the dog sitting on the frog in a two-page picture.  Once dog removes himself from frog, frog now has the chalk and is educating the animals on his new rules on a blackboard.  For his guidelines, Jim Field has varied the canvas for each single page image; turquoise, orange, purple, and green.  Sometimes he will extend the illustration from left to right as frog continues to speak.

The comedy found in his details will have readers pausing repeatedly; bears eating bowls of porridge, a moth reading a book about light bulbs, the look on the sheep's face with a leopard sitting on the shepherd, the Adam's Apples painted on the side of a wagon and a skunk wearing a clothespin on its nose.  It's the expressions on the animals' faces which seal the deal.  Frog is featured somewhere on one of every two pages.

One of my favorite illustrations of many is the one on the right for the above-noted passage.  Frog is doing the back stroke alongside a canoe.  Sitting in the canoe is a big gnu, holding a double-paddled oar in his hands.  On each oar a boar is seated.  One is wearing a pink, pig-tailed wig looking like Pippi Longstocking.  The gnu is wearing a wig like those worn in the French court by women during the eighteenth century.  Sitting on top of the gnu's wig are three little pigs.


I can already hear the laughter of readers as Oi DOG! written by Kes Gray and Claire Gray with illustrations by Jim Field is silently read or read aloud.  The combination of text and images is loaded with humor at every page turn.  It is more than a fitting sequel to the first title.  You must have both books on your professional and personal bookshelves.

To learn more about Kes Gray and Jim Field please take a few moments to visit their websites by following the links attached to their names.  Jim Field has a lot of process art on the page dedicated to this book.  It's interesting to compare what was initially drawn and what remains in the book.
Posted by Xena's Mom at 7:31 PM