There will be days when a book makes its way into your reading life at the best possible moment.  Your heart is heavy and reading its story takes the weight away for just the right amount of time to allow you to step back.  The narrative strikes a chord in your mind.  You know you won't forget this book. 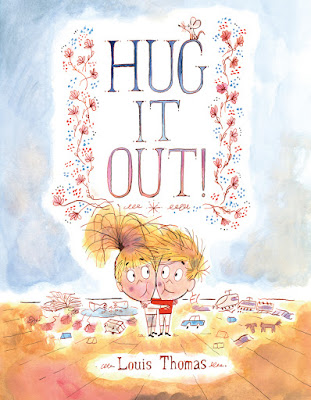 Mothers are a clever, strong, incredible group of human beings.  I know this because of my mother.  I know this because of all the mothers' children who have entered my libraries over the years.  I know this because of their willingness to speak out for what is right for today and tomorrow.  Hug It Out! (Farrar Straus Giroux Books for Young Readers, an imprint of Macmillan Publishing Group, LLC, January 3, 2017) a debut picture book, written and illustrated by Louis Thomas, will have readers nodding knowingly and grinning from ear to ear because they can see themselves in this story.

It was a rainy Sunday afternoon.  Woody and Annie were playing inside.

Their imaginations were in high gear as the one designed an airport and the other constructed a community.  All was well until they both wanted the same thing, a toy car.  What's an airport or a town without vehicles?  Quickly yells to mom were heard.

When admonished to share, the siblings pinkie-promised their mother they would take turns using the car.  Seconds later the name calling began and then shouts to Mom joined the chorus.  Woody and Annie had to apologize for the name calling.  Before two heartbeats passed the kicking commenced.

Mom stormed into the room declaring there was to be no more fighting...at all.  In fact every time she so much as heard a whispered discord, they would have to

Wait a minute.  Hug it out?  Yikes!  Needless to say, this was not appreciated by the sister and brother.  They even had to practice before their mom left the room.  It was disgusting to them.

If you think they decided to play nicely after this declared new rule, you would be wrong.  Shouts of

rang through the house repeatedly.  Finally Annie turned to Woody with a revelation.  Woody turned to Annie with an equally funny observation.  Several mutual agreements were reached.  It's a win for all.


With a clear knowledge of the lingo used by siblings, Louis Thomas has penned a story of truth, ingenuity and acceptance.  The combination of narrative and dialogue is guaranteed to make readers and listeners laugh out loud.  In true storytelling fashion there are three conflicts leading to the shocking proclamation by Mom.  Here is a sample passage.


You would never know what happens inside the covers of this book from the front of the matching dust jacket and book case.  We are seeing the results of one clever mom.  But if you look closely at the toys scattered about Annie and Woody, you get a hint of the events previous to this charming conclusion.  To the left on the back, the family cat is hugging an unlikely animal pal.  This small image is placed on a canvas of red; the same color as Woody's shirt.  The characters and text are varnished.  The opening and closing endpapers are sky blue.  On the title page the words are framed in flowers.  A teeny tiny being is sitting on the T in Thomas.  It is a very wise teeny tiny being.  Above the publication information is the family cat looking very startled.  On the dedication page the toy car which starts the day of squabbling is featured.

There is much to look at in each illustration rendered by Louis Thomas.  On the first page as the children play quietly, the cat is stretched sleeping next to the toy car.  Careful readers will see a teeny tiny visitor peeking from among the books on the shelf.  This creature and the cat have a separate story for readers to follow.

It's the wide eyes on all the characters and the exaggerated movements of the cat which will generate lots of giggles and grins.  Thomas alters his perspective during moments of heightened wildness on the part of the siblings.  The wordless double-page picture when Annie and Woody hear their mother's new rule is totally hilarious.  Fluid fine lines and brush strokes supply a feeling of realism.

One of my favorite illustrations of many is when the children's mother first comes to break up their argument about the car.  She is calmly kneeling in front of them on the right as they stand next to each other on the left, pinkie fingers entwined.  Between them is the toy car on the floor.  Unknown to the characters the cat is stretching out a long arm and paw to snag the car.


This is one book which is going to be enjoyed by all who read it or hear it.  I can already predict the calls of Hug It Out! in classrooms and homes.  Louis Thomas in his debut picture book is spot-on with sibling quarreling and a resolution worth shouting out loud as often as necessary.  I would pair this with Hug Machine written and illustrated by Scott Campbell and The Runaway Hug by Nick Bland with illustrations by Freya Blackwood.

To learn more about Louis Thomas and view his other work please follow the link attached to his name to access his blog.  At the publisher's website you can view interior images.  There is an activity kit and a dedicated website for this title.
Posted by Xena's Mom at 10:41 PM