When attending college dorm life was highly regimented.  Compared to campus life now, it was downright laughable.  One thing which was never a laughing matter though was the schedule for meals on Sunday.  There were only two; the final one at noon.  When dinnertime arrived my suitemates and I sometimes pooled our financial resources and ordered a pizza but we usually went without food.  After studies and class prep for Monday, we went to bed early.

Inevitably as we were lying there waiting for sleep, someone would call out their favorite food.  Someone else would call out their favorite food.  Pretty soon, we were not only all talking about food but describing it so vividly you could swear the rooms were filled with the aromas of a banquet hall before a feast.  It was as if you could reach out and taste whatever your heart desired. 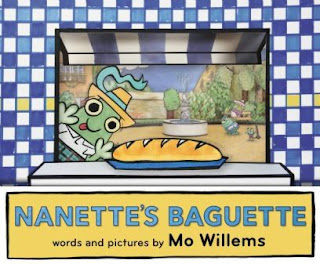 Cravings for a particular cuisine are a powerful thing.  Nanette's Baguette (Hyperion Books for Children, an imprint of Disney Group, October 25, 2016) words and pictures by Mo Willems follows a frog during a food fiasco.  A first becomes the worst.

It's hard to forget the first day you get to get the baguette.  It's a huge undertaking for Nanette but she's ready for the task.  Along the path to the bakery she greets four friends, one even has his clarinet.  Another is walking his pet, Antoinette.

Leaving the foursome, Nanette walks into the bakery where Juliette is waiting.  She hands her the most beautiful baguette.  It's still warm from the oven.  It smells delicious.  It seems to be bigger than a normal baguette.  YIKES!

How did that happen? Yum! Yum!  Nanette took a bite of the baguette.  It tastes scrumptious.  YIKES!  She did it again!  The baguette is not quite as big as it was.  What will Nanette do next?

Well, that was probably not the best decision Nanette has ever made.  In fact, now she seems to be in a bit of a pickle.  Adding to her trouble, the weather turns dismal and wet; much like her mood.  Now what?  Mom knows best.  Bakery baguettes are still warm from the oven.  Bakery baguettes still smell delicious. YIKES!

This two word title, Nanette's Baguette, is the basis for an entire story in the masterful mind of Mo Willems.  The impeccable rhyming creates a catchy cadence.  Some of the phrases are barely shy of tongue twister status. The repetition of key words is a welcoming invitation for audience participation. Here is another sample passage.


As soon as you look at the opened, matching dust jacket and book case, you know there is something extraordinary about the illustrations for this title.  Mo Willems fashioned these images by

He made the entire village for this story by hand.  The front is a close up of the bakery window with Nanette and the baguette.  To the left, on the back, Nanette and her mom are sitting on the bench in the town circle, snacking on a baguette.  This smaller picture appears to be in 3-D, raised from the rustic, reddish orange canvas.

The opening and closing endpapers are a dusty green with baguettes placed on them in rows.  Those on the closing endpapers tell a tale, leaving space for the publication information.  The two-page picture for the title page is a panoramic view of the village featuring many of the characters.

Throughout the story the backgrounds shift from green to purple to blue, a golden brown and brown; a reflection of the emotional turns in the narrative.  Many of the illustrations appear raised from the background in square or rectangle shapes with elements moving outside the frame.  Other illustrations are created on the canvas itself, a collection of smaller (or huge) visuals.

The facial expressions on Nanette leave no doubt as to the state of her mind (and stomach) during the tale.  Her eyes and body posture speak volumes.  Her hat, shirt and skirt are the delightful finishing touches.

One of my favorite of many illustrated pages is when Nanette first has the baguette.  In one of the pictures with closed eyes she is hugging it close to feel the warmth.  In the next image, eyes still closed, mouth in a blissful grin, she is smelling it.  In the third visual she is slightly larger and we see only her body from the waist up.  She is holding the baguette in one hand, lengthwise and vertical.  Her eyes, now wide open, are assessing the large size of the baguette.  You can feel the tension mounting as a decision is going to be made.


Will you laugh out loud repeatedly reading Nanette's Baguette, words and pictures by Mo Willems? YOU BET!  Will you be craving a taste of a baguette before you're even started with the story?  YOU BET!  Will you imagine you can feel its warmth and smell the savory scent?  YOU BET!  I recommend you read this repeatedly to yourself and out loud so others can enjoy all the fun.  Get multiple copies for your professional shelves and one for your personal bookcases at home.

To learn more about Mo Willems and his other work please follow the links attached to his name to access his website and blogs.  Julie Danielson, author, reviewer and blogger at Seven Impossible Things Before Breakfast reviews this title at BookPage. (Be sure to visit Julie's blog too to view interior images.) Mo Willems was a recent guest at The Yarn: The Inside Story of Children's Books by Travis Jonker and Colby Sharp.  Enjoy the videos.


You can check out some of the original drawings & sketches for NANETTE'S BAGUETTE at the @RMGalleries site: https://t.co/72jYaXKPbv pic.twitter.com/rzKDJ2BqQY
— Mo Willems' Pigeon (@The_Pigeon) October 31, 2016