As a child spending a day at the Potter Park Zoo was an event to be remembered.  Even as an adult, strolling among the exhibits I felt a sense of peace and wonder.  There is a part of me, a part I hope all of us holds, that wishes these animals were free to live full and happy lives out in the world in their natural habitats but I have come to recognize the importance of the best kind of zoo. 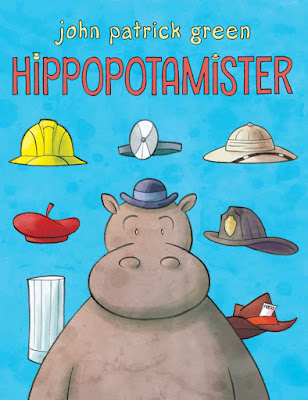 It would seem residents in a zoo might be looking for that one thing at which they excel.  Or like some individuals in the human realm, they might discover a passion for more than one pursuit.  Hippopotamister (First Second, May 10, 2016) written and illustrated by John Patrick Green is a graphic novel designed to have you grinning from ear to ear as soon as you look at the dust jacket.

It was nearly vacant except for the animal occupants and let me tell you, they were looking the worse for wear.  At the hub of this lackluster facility lived Red Panda and Hippopotamus.  Red Panda, at his wits end, declared to his friend, Hippopotamus, he was leaving the zoo.  He was going to live among the humans disguised as a human.

Of course, Red Panda could find him a job but first Hippopotamus needed to change his name to Hippopotamister if he wanted to blend in as a human.  Their first job was as construction workers.  They don't exactly conform to the skyscraper being built.  Red Panda's work looks like a cobbled-up mess from a dumpster.  Hippopotamus builds an elaborate castle. Hmm....  As you can imagine, they were fired.

Their stints as hair stylists, chefs, bankers and dental hygienists yielded similar results.  Red Panda had a knack at nothing and Hippopotamus excelled at everything.  The outcomes were shocking and marvelous.  Eight more trades were tried until one particular morning Red Panda declared they needed a day off. (I think the human world needed a day off from this duo too.)

They decided to visit their zoo.  As they meandered down the paths Hippopotamister with his newly acquired skills began to notice certain details. He was most definitely thinking but Red Panda could hardly wait to get out of there.  More positions were tried until the roles were reversed in one final place.  The twosome parted ways but not on good terms.

Back at the zoo Hippopotamus rested on his rock wondering and wondering.  Late at night changes happened.  In the morning the zoo citizens were dumbfounded.  No one was more surprised than Hippopotamister with what happened next.

With a flawless blend of text by an unseen narrator and dialogue between and by Red Panda and Hippopotamus, readers are treated to the humorous story created by John Patrick Green.  Whenever the narrator makes a statement it is followed with supportive points generating a cadence.  Comedy is present in every situation when Hippopotamus wonders if he will be successful at a job in which he knows nothing and Red Panda offers his "sage" advice.  Here is the exchange between the two at their first job.

I've never done anything like this before.  How do I know I'm doing a good job?
Relax, Hippopotamister.  You'll be a natural, like me.
Well, I don't want to make any mistakes.
No one expects you to be perfect, Hippopotamister.

What in blazes?
We're building a skyscraper!
Look at what you've done with the supplies.

The array of hats around Hippopotamus on the front of the dust jacket and above Red Panda on the back, to the left, is just a hint of the hilarity to be found within this book.  The washed sky blue background draws the readers' attention to the colors of the companions and the headwear.  On the spine Hippopotamus is wearing the chef hat at the bottom.  It's his noncommittal expression contrasted with Red Panda's yippee-here-we-go-again look which is another suggestion of the comedy about to begin.

On the book case John Patrick Green has cleverly shown on the right Hippopotamister looking rather dapper in a city setting and on the left, Hippopotamus is standing in front of the zoo gate.  On the opening and closing endpapers we get a bird's eye view of twenty zoo exhibits but the contrast between the two is striking; a before-and-after look.  Careful readers will spot Red Panda and Hippopotamister in their roles.  Who is on top of the wart hog?  The change in the penguins is funnier than funny.

John Patrick Green alters his panel sizes to provide pacing and interest.  They are all framed in white with the exception of those images extending edge to edge across two pages.  His wordless pictures are sure to prompt explosions of laughter.  The expressions on the faces of Hippopotamus and Red Panda are another wonderful source of giggles and grins.  Truthfully nearly every page turn provides an opportunity for major smileage.

One of my many favorite illustrations is after the pals have been working in the bank.  This wordless two page picture shows Red Panda in a scuffle with the bank manager on the left.  He thinks the gentleman's mustache resembles walrus tusks.  On the right Hippopotamister has balanced the books with his amazing mathematical skills.  Green also shows next to his adding machine and balance scales on his desk a stack of books, much like a house of cards, perfectly balanced.


Hippopotamister written and illustrated by John Patrick Green is fantastic fun!  No wonder it is one of School Library Journal's Top 10 Graphic Novels | 2016.  On December 30, 2016 it garnered one of the 2016 Nerdies in the Graphic Novel category.  You are going to need several copies of this title on your professional shelves and at least one for your personal shelves.

To learn more about John Patrick Green and his other work please follow the link attached to his name to access his website.  You can view some interior images at the publisher's website.  First Second has a five question interview of John Patrick Green.  Geek Dad has an exclusive look at Hippopotamister.  The Beat Comics Culture interviews John Patrick Green.  Green wrote a guest post for the Nerdy Book Club.  John Schumacher, Scholastic's Ambassador of School Libraries, participates in a comic interview with Hippo at Watch. Connect. Read.  At Seven Impossible Things Before Breakfast the blog of author, reviewer and blogger, Julie Danielson, she interviews Red Panda and Hippo in a cartoon.
Posted by Xena's Mom at 10:38 PM