No Way No How!

Being little, as in very young, is not easy.  Everything is new.  Your senses are continuously on overload as you take in every single thing that is completely unfamiliar.  Your mind is constantly working to store every tidbit of information for future reference.  Some days everything seems to be a challenge. 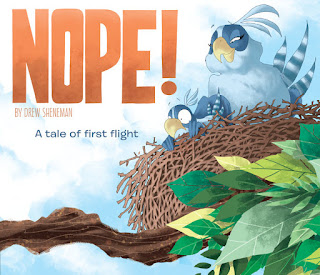 When something (or someone) asks you to step outside your comfort zone instinct kicks into high.  It shouts at you to watch out, warning you of all the things which might go wrong.  NOPE! (Viking Penguin Young Readers Group, an imprint of Penguin Random House LLC, January 17, 2017) written and illustrated by award-winning cartoonist Drew Sheneman addresses the very real issue of being afraid of heights.  For a bird this is a distinct problem.  This debut picture book, nearly wordless, is a classic comedic prize.

The story begins with mother bird cruising in for a landing in the nest where her fledgling is clinging to the edge.  She invites him to fly but as he looks over the side, the view is akin to standing on the top of the Empire State Building (at least in his tiny bird mind).  He frantically rushes back to her and loudly proclaims

With her wing she nudges him to try again and points toward the brink of the only home he has ever known.  What his mind conjures up is terrifying.  He can't believe what he is seeing.  He looks again and it's even worse.

Shouting more forcefully than before, he tells his mother he won't go.  In great detail he explains his reasons as he forcefully gestures.  As mothers are apt to do, she points toward the boundary of the nest.

With mounting apprehension he looks over and what he sees (in his tiny bird mind) would scare anyone.  This time negative responses, in an assortment of languages, are pouring from his beak like raindrops in a thunderstorm.  With gentleness, his mother picks him up and showers him with affection before she does the unthinkable.  UH! OH!   OH! NO!  OH! WOW!


All it takes is one word, one single word.  It's the placement of this word and the number of times it's used that give this story one humorous moment after another.  It also provides the quintessential setup for the twists Drew Sheneman adds when the baby bird and readers least expect them.  (I dare you not to burst out laughing.)


There is something about the expression on the face of the mother bird on the front of the dust jacket which gives a wee hint of the surprise to come.  Is it affection, wisdom or the look of a plan forming in her mind?  The infant bird is definitely terrified of leaving the nest.  As the branch extends under the spine and continues on the back, to the left, Drew Sheneman places four small square images on the sky which also hint at the story's outcome.

On the book case another branch or an extension of the first branch has the baby bird running like crazy toward safety.  He looks ready to yell out NOPE!  On the opening and closing endpapers thirty-nine white sketches of the baby bird in various stages of distress (and sometimes peace and joy) have been patterned in four rows on a blue canvas.  The two page illustration for the title page begins the story of mother bird happily coasting in to the nest.

Painted digitally in Adobe Photoshop the illustrations are presented in a format similar to a graphic novel; one page may contain three horizontal pictures followed by a single page picture, all framed by fine lines and white space.  Then Sheneman surprises us with a large double-page illustration, edge to edge, for dramatic effect.  His use of white space is brilliant as is his typography for the word nope.

One of my many favorite illustrations is actually a series of four vertical pictures on two pages.  It is after the baby bird has looked over the edge for the second time imagining a horror.  He first looks at us sideways with fear.  Then he shakes his head in disbelief.  It is followed with him hitting his head with his wing to dislodge the sight from his mind.  In the final panel he looks over the edge again aghast at what he sees.


Even with few words, as a read aloud, NOPE! written and illustrated by Drew Sheneman is a winner.  Students readily chanted the text and laughed and gasped as the tale unfolded.  You are going to need more than one copy of this for your professional shelves.  You will have to have one for yourself and to gift to others.  NOPE! is a definite YES!

To learn more about Drew Sheneman and his other work please visit his website by following the link attached to his name.  Drew can be found on Instagram, Facebook and he maintains Tumblr pages.  There is some process art at his website for this title.  You can view the endpapers at the publisher's website.
Posted by Xena's Mom at 10:08 PM