Blame It On The Ball

On January 23, 2017 the American Library Association announced their annual Youth Media Awards in what is one of the premiere events in the children's literature world.  Twenty-one separate categories honor distinguished works and their creators.  One of the categories is the (Theodore Seuss) Geisel Award.  It is given to

the author(s) and illustrator(s) of the most distinguished American book for beginning readers published in English in the United States during the preceding year. 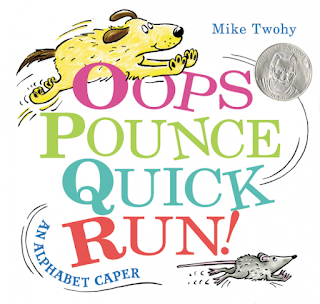 This year there was one award winner and four honor selections.  Of those honor selections I have previously written about The Infamous Ratsos and Good Night Owl.  I did read the winner We Are Growing:  A Mo Willems' Elephant & Piggie Like Reading! Book written and illustrated by Michigan author illustrator Laurie Keller.  It definitely qualifies as one of the most hilarious books of 2016.  Upon reading one of the other honor books, Oops Pounce Quick Run!: An Alphabet Caper (Balzar + Bray, an imprint of HarperCollinsPublishers, February 16, 2016) written and illustrated by Mike Twohy, it's easy to see why the committee gave it notice.

A story unfolds with this single word.  We look inside the home of a mouse quietly resting in a reclining chair opposite a hole in the wall.  With the next word, ball, the nap is interrupted, starting a series of actions each beginning with a letter of the alphabet.

As the ball is held by the surprised mouse a large nose and eye of the canine variety seek the said ball.  Quicker than you can call look out, paws reach into the hole for the lost toy.  One scared mouse escapes through the home's entrance lickety-split.  And the race commences in earnest.

Through the kitchen and living room they run until the baffled dog can't find the mouse.  Now where could the tiny creature be?  Ah! Ha!  The pooch's pounce misses.  They tear toward the mouse's house.  Whew!  He made it.

In a clever twist on the chase and race theme, the tiny creature has a better idea.  The dog is an exceedingly pleased pup.  And there you have it readers...wisdom for the win.


With true brilliance Mike Twohy strings single words, sometimes two and even a single letter, to fashion a story full of fun and energy.  The only time the character(s) are not moving is at the beginning and the end which is another stroke of genius; a circle story in several respects.  Twohy shifts the focus from one character to another and to both with flawless ease generating a captivating pace.


The fast and furious lines on the front of the matching dust jacket and book case leave no doubt as to the commotion and comedy found inside this book.  In this scene the canine seems to have the upper paw but when you look to the left, at the back, a different "tail" is told.  The dog has been placed on the same pristine white background in the center.  By the movement of his head from left to right and back again, you know he has lost sight of the mouse.

The opening and closing endpapers are the bright orange color of the ball.  On the initial title page Twohy sets the stage by showing us the mouse hole beneath the text.  All of the single page illustrations, rendered in India ink and felt-tip pens, are on single pages with the exception of the letter H.

To heighten interest the first letter is shown in different colors; bright pink, blue, orange, red, teal, blue, and grass green.  The images are showcased by continuing to use the crisp white background.  Spot color is added to the characters or one or two items in the scene.  The body language and facial expressions convey emotion with clarity and a great deal of humor.

One of my many favorite illustrations is for the letter X.  I wish I could tell you more but I don't want to spoil it for you.  I can't look at it without bursting out in laughter.


You will want to plan on having multiple copies of Oops Pounce Quick Run!: An Alphabet Caper written and illustrated by Mike Twohy on your professional and personal bookshelves.  It's an imaginative and intelligent use of the alphabet to tell a story.  And best of all...your guys and gals are going to love it.

At the publisher's website you can get a brief overview on Mike Twohy.  He does have a yellow Labrador who enjoys his ball.  There is also a short view of some pages with audio.