A Trio Of Tantalizing Treats

The number three is commonly found in folklore.  As a storytelling technique it supplies a cadence to the narrative.  Listeners and readers seem to gravitate to this rhythm as if it's wired into their DNA passed on from generation to generation. 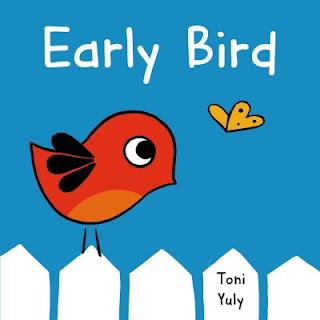 A morning stretch helps her to feel tall.  Filling her lungs with daybreak's clear air, she sets off with a mission on her mind.  Nothing distracts her from her path; not even the spider peering from her web.

She weaves her way through grass, flowers and past the fence in the yard.  Cleverly she eludes a sleeping cat.  Moments later she reaches her goal, the garden.

After this trek Early Bird finds herself with a healthy appetite.  It's time for a juicy feast.


Five sentences form this story.  Toni Yuly uses easily understood adverbs defining them within the text and her illustrations.  They are used to indicate direction making them integral to Early Bird's early morning trip.  Here is a sample portion of one sentence.

Across the grass
through the flowerbed
under the spiderweb ...

Though the illustrations on the front and the back of the matching dust jacket and book case are different, Toni Yuly has them placed to create a pleasing blend as if they are one.  Primary colors paired with the white picket fence and firm black lines have a huge appeal for the intended audience.  The opening endpapers are done in a deep midnight blue.  A cheerful golden yellow, the same as the butterfly on the front, covers the closing endpapers.

Yuly uses the title page to begin the story with a crescent moon in the sky over a sleeping Early Bird in her nest.  Sixteen double-page images follow Early Bird on her journey with the backgrounds gradually getting lighter until the shade on the closing endpaper is reached.  There are two exceptions to this pattern with the background in white.  They represent critical events in the story.

Very exact details dictate the mood in this story; the eyelashes on the sun peeking over the horizon, the three ladybugs on the blade of grass, three bees among the flowers, a flower becoming the letter o and the musical notes on the final picture.  There are not a lot of elements in each picture but each is essential.  The layout and design form a wonderful pace along with the placement of the text.

One of my favorite illustrations is of Early Bird breathing in the crisp morning air.  The background is a lighter hue of the dark blue.  On the left side of the image is a large orange, pink and white blooming flower.  To the left on a darkened hill stands Early Bird head tipped back, eyes closed and beak open.  The air is moving around her. 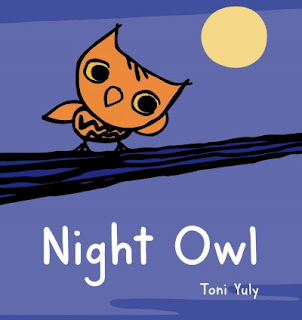 He bids the sun farewell and greets the moon.  Someone is missing.  Mommy Owl has disappeared.  He hears a sound.  Perhaps it is Mommy Owl.

It's not quite right.  It's only Woodpecker.  What's that noise?  Flying to investigate, Night Owl discovers that this sound is too long to belong to his mother.

He looks high and he looks low.  Mommy is not to be found.  A noisy storm sends him back to the safety of his tree hollow home.  Comfy and as brave as a little owl can be, Night Owl starts to drift into dreamland when he suddenly finds himself awake.  Mommy?


Using more sentences in this story allows Yuly to establish a different sort of rhythm.  As soon as Night Owl discovers Mommy is missing he listens, hears a sound and looks to see if it's his mother.  It's a question followed by an observation and then an answer.  Readers learn about short, long, high, and low kinds of sounds. Here is a sample portion.

He listens...
tap tap tap
...is that Mommy Owl?
No, that sound is too short.
It is Woodpecker.

As in the first book, Toni Yuly astutely blends the front image with the back illustration on the matching dust jacket and book case.  The branch on which Night Owl is perched goes to the dark spine.  To the left of the spine is a large tree supporting another branch holding up Woodpecker as he makes a hole in the trunk.  The endpapers' colors are a reverse of the first book; a paler golden yellow to a deeper blue.

On the title page Night Owl is resting his head on his wing as if it's a hand, looking outside the hole in his tree.  All of the illustrations span two pages with the exception of two single page pictures.  The background hues are varying shades of the blue and purple colors of night.

Careful readers will see that Yuly places small details from one illustration in another.  On the page with Woodpecker, the train tracks appear at the bottom.  Cricket follows Night Owl to the pond.  Using a much light shade of purple for the sounds, different fonts and positioning them apart from the narrative text is wonderful.

When Night Owl first finds out he is alone is one of several favorite pictures of mine.  A lighter purple background blended with a slighter darker layer on the bottom allows the moon partially covered by clouds and the tree branch to stand out to the reader.  Night Owl is shown with four different head positions on the same branch; right, back, left and forward.  He is most definitely more wide-eyed than usual. 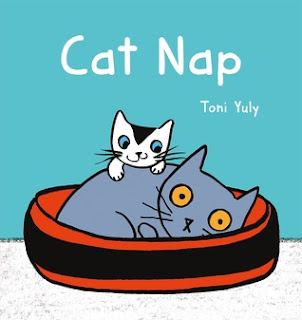 The clock says noon.
It's time to rest.

Clearly Cat is in agreement with taking a nap.  Clearly Kitten would much rather seek out fun. And she does not want to do it alone.  Nothing would please her more than sharing this enjoyment with Cat.

A suggestion of a game of hide-and-seek is met with grudging acceptance.  This might work out for Cat if the right spot is found.  Unfortunately Kitten is a very skilled detective.

Wherever Cat goes, Kitten follows.  All this hiding has made Cat more tired than ever.  He can hardly wait to curl up in his bed and fall fast asleep.  Kitten wins again!


Toni Yuly lets her readers know very quickly there is a contest of wills which will drive this story.  Each time Cat hides and is found by Kitten the tension grows as we move high and then low, in the dark and into the light and inside and outside.  It is the perfect setup for the conclusion.  Here is a single portion.

The colors shown on the front of the matching dust jacket and book case are used throughout the title with the addition of shades of brown and gray.  You can tell from the wide-eyed look of Cat and the eager grin on Kitten's face, this story is going to be filled with humor.  The red from the jacket and case is used for the opening and closing endpapers.

On the title page Kitten is leaping beneath the text after Cat who is almost off the page to the right.  With the exception of two pages divided into four images, all of the illustrations are spread across both pages.  There is a definite retro feel to the interior of the home based upon the design and individual elements.  The shelving is filled with many interesting items sure to generate further investigation and discussion.

The looks on Kitten's face declare her to be a complete scamp.  Cat tolerates Kitten's antics...barely.  A tiny mouse is included in nearly all the illustrations.  When Cat and Kitten are in the basement, the expression on the mouse's face near the spider web will ring true with many readers.

One of my many favorite illustrations is when near the beginning Kitten pounces on Cat.  Yuly has given us a close-up perspective of Cat's face wearing a perturbed expression and eyes looking upward at Kitten.  Kitten is on top of Cat's head, arms and paws holding on between his ears.  Kitten is looking downright gleeful, giving us a toothy grin.


Early Bird, Night Owl, and Cat Nap written and illustrated by Toni Yuly are absolutely brilliant.  Superb pacing in the text and careful placement of details within the illustrations (which appear simple but are more complex in what they convey) make all three of these titles reader favorites during group story time or one-on-one at bedtime.  You must have these on your personal and professional shelves.

To learn more about Toni Yuly and her work please follow the link attached to her name to access her website. Here are the links for the books in order by publication date featured at the publisher's website; here, here and here.  Each one has eight illustrations for you to view.  Toni Yuly and her work are highlighted by author, reviewer and blogger, Julie Danielson at Seven Impossible Things Before Breakfast.  Scholastic Ambassador for School Libraries John Schumacher features her on his blog, Watch. Connect. Read.  Toni Yuly is interviewed at Miss Marple's Musings, The Little Crooked Cottage, KidLit411 and Writing For Kids (While Raising Them).  Podcast chats with Toni Yuly can be found at The Picturebooking Podcast, Storybook Spotlight and All The Wonders.
Posted by Xena's Mom at 1:50 AM