Sharing an adventure with a best buddy is much better than going alone if for no other reason than you will have someone to corroborate your unbelievable stories.  A pal can offer additional protection in the face of unexpected challenges and invaluable assistance in making split-second decisions.  Their support when your get-up-and-go has gone and when witnessing true beauty is priceless.

When either of you can make the other laugh or the two of you are laughing together or even better if you can make those around you laugh, this is simply the best.  With the release of two books in a brand new series classic comedy teams of William Abbott and Lou Costello, Stan Laurel and Oliver Hardy, George Burns and Grace Allen, Lucille Ball and Vivian Vance (Ethel) and Tim Conway and Harvey Korman are going to have to relinquish a portion of the limelight to the dog duo found in Haggis And Tank Unleashed #1: All Paws on Deck (Scholastic, January 5, 2016) and Haggis And Tank Unleashed #2: Digging for Dinos (Scholastic, February 23, 2016).  Author Jessica Young and illustrator James Burks deliver to readers non-stop action packed with hilarity. 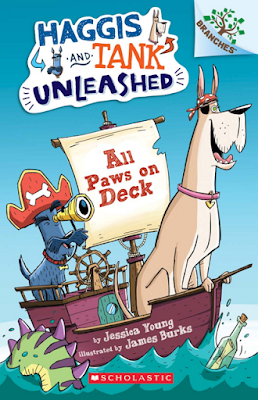 Haggis was bored.
It was too early for lunch.
It was too late for barking at the mail carrier.
And the cat next door had gone inside.

Tank, on the other paw, was not bored.  She was riding down a hill in her wagon reading of pirates, treasure and sailing on the Seven Seas.  Before Haggis could formulate any sort of negative campaign to her suggestions, Tank turned her wagon into a ship, the Golden Biscuit, to transport them toward rare riches.

Still reluctant Haggis finally agreed to set sail as Captain Scurvy with first mate Bootleg Bonny (Tank).  Pirate lingo and orders were tested and provisions were packed.  Haggis settled into the role of leader but Tank could not, despite genuine attempts, seem to get the hang of first mate duties especially tying knots.  They were not one of her talents.

A bottle found at sea revealed a drawing of a treasure map on a desert island or was it a dessert island?  A trail was traced and possible x-marks-the-spot holes changed the landscape.  Our twosome was tried and tired.  Setting sail for home proved to be difficult without a cooperating breeze but a squeaky toy, a monster from the watery depths and a canon blast did what Mother Nature could not.  The best and biggest bonus awaited them. 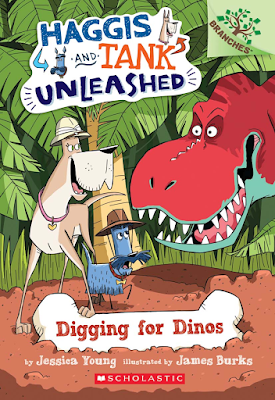 Haggis woke up early and got ready for the day.
He clipped his toenails.
He snipped his mustache.
He polished his dog tag until it sparkled.

As usual Tank disregarded grooming in favor of reading.  Completely taken with tales of dinosaurs, Tank convinced Haggis to go on an expedition looking for these prehistoric giants.  Extinction was not in Tank's vocabulary when adventure called.

Loaded with provisions and wearing appropriate attire, the canine companions soon walked along a tropical forest path.  Though, truth be told, their tracking skills were lacking.  I'm surprised they did not get dizzy.

Suddenly a set of big tracks and loud noises frightened the pals and accidentally led them to not one, not two but three dinosaur eggs.  A dilemma developed for keeping them warm until big mama appeared.  Eye-opening dinosaur discoveries were made until the situation became too hot for our heroes.  Suds and sleep remained.


Targeted for early readers and part of the Scholastic Branches books, these titles will appeal to all readers for the wit woven into the narrative written by Jessica Young.  Word play abounds in the six chapters in each book; homophones playing a huge part in the humor supplied in the conversations between Haggis and Tank.  A comedic mix of text and dialogue move the pace quickly from one moment to the next.  Here are a several sample passages. Tank's voice is in red.  Haggis's voice is in blue.  The text is in bold and black.

Hey! Why did you do that?
Because we're stuck in the middle of the ocean with no food, no water, and no hope of finding land!  We're drifting in endless circles of doom, and I can't take that squeaking anymore!  I just need a little peace!
A little piece of what?
GAAAAAH!

Suddenly, Tank spotted a speck in the distance.
The speck was moving.
Look, Captain Scurvy!
There's something swimming in the water!
That's a tall tale.  Quit making up stories.
It is a tall tail!
Uh-huh.


Tank looked at the egg.  She had an idea.
I'll egg-sit you until your mama gets back.  Maybe I'll even hatch you!
Hatch who?
Bless you, Haggis!
No, hatch who?
Two sneezes!  I hope you're not getting a cold?
I'm not sneezing!  I'm asking you who---who are you going to hatch?
A baby dinosaur!


From the front of the two book cases it's easy to see that the Great Dane, Tank, and the Scottish terrier, Haggis, are set to imagine the best possible tales.  James Burks entices readers by highlighting an exciting episode from each title tying in other elements from more than one chapter.  Each book begins with a double page spread and ends with a wordless single page image.

The pacing is developed through layout and design similar to graphic novels employing a variety of single page pictures and pages divided by multiple illustrations.  Each title contains at least five two-page visuals.  A smaller inset might be placed in some of these.

A full color palette will captivate readers as well as the extra details.  Long eyelashes on Tank, the tartan plaid on Haggis' dog bed, the small black bones encasing the page numbers, the glowing clouds when the duo transition from reality to a fantastic world, Lockout Rock in the shape of a telescope, the duo wearing life jackets when they are in the rowboat, and the shape of their dog tags add to the overall fun experienced when reading about these furry friends.  Using speech bubbles with different colored fonts helps readers to discern between the two characters.

One of my favorite illustrations from the first title is when Tank is chewing on her squeaky toy over and over and over again.  She is happily oblivious to the growing frustration of Haggis until he shouts in annoyance with his captain's hat lifting off his head.  It's a close-up of the two dogs enhancing their current moods.

In the second book one of my favorite images is before their adventure starts.  Tank is digging like crazy in the back yard looking for another bone.  All she finds is a dirty tennis ball and Haggis, who if you remember has recently groomed himself, has disappeared.  Of course, Haggis is buried under a pile of dirt.  Only his ears and tail are visible.


Haggis And Tank Unleashed: All Paws on Deck and Haggis and Tank Unleashed: Digging for Dinos written by Jessica Young with illustrations by James Burks are rip-tickling, first rate adventures.  Readers will find themselves bursting out loud with laughter and rolling their eyes at the silly conversations between these two friends.  You should plan on multiple copies for your professional shelves and expect I-want-to-read-it-first discussions (arguments) in your home.  Four paws up high for these books!

Please visit Jessica Young's and James Burks's websites to discover more about them and their other books by following the links attached to their names.  Scholastic has designed a special website for this series.  It includes excerpts from each title, an After-Reading Guide, a Hunt for homophones with Haggis and Tank!, and a Draw your own pirate ship flag! sheet.
Posted by Xena's Mom at 7:53 PM