And The Plot Thickens

Every snapshot of life is composed of layers.  If we take any given scene revealed by a glance out the window of our home, a look across our yard at an unusual bird squawk, or a peek at people walking down the street when we are stopped at a light, we can expect there to be more beneath the surface.  The bird, a crow, upon further inspection is being chased by a bunch of smaller birds, probably for doing something pesky.  The tree, in which it takes sanctuary, now more than fifty feet tall, was planted decades ago by a little boy in memory of a beloved pet.  This pet was saved from...  Thankfully there will always be stories within stories. 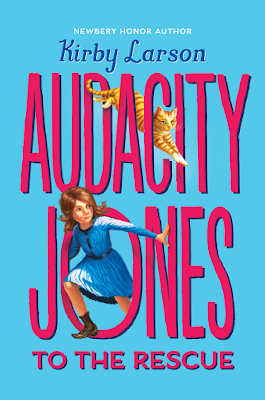 When you have the opportunity to read a book with threads of history and mystery liberally woven into the fabric of a classic adventure, you can expect to have a page-turner on your hands.  Audacity Jones To The Rescue (Scholastic Press, January 26, 2016) written by Newbery Honor award winner Kirby Larson introduces readers to an eleven year old who more than lives up to her name.  Audacity Jones' predictable life at Miss Maisie's School for Wayward Girls in Swayzee, Indiana is about to change on this Christmas Eve.

WARNING
If you are a reader whose knees wobble at the mere mention of adventure, danger and derring-do, close these covers immediately and select a tome more to your liking.

Perhaps something about pudding.

Audacity Jones has once again devoured every sprig of burned broccoli, even though clean plates simply were not tolerated at Miss Maisie's School for Wayward Girls.
Miss Maisie's barley-water breath traveled the length of the scarred mahogany table, arriving well before her reprimand.

To her good friends, the triplets, Lilac, Lavender and Violet, and Bimmy, Audacity's fate on this holiday eve is upsetting at the very least.  To be sent to the Punishment Room is the worst sort of discipline any of the seventeen girls residing in this home can imagine.  In fact no one has ever been there and most certainly not with the regularity which seems to plague Audacity.

If they only knew what is within those four walls.  It's a magnificent library with books gathered by the late Mr. Witherton.  Audacity, like a particular rabbit begging not to be thrown into a briar patch, rather likes learning as much as she can.  She is frequently visited by a wayward cat, Miniver, with an uncanny amount of intelligence.  Her time this evening though is cut short by an unexpected visitor.

Commodore Crutchfield, a routine benefactor of the school, has arrived.  He is in need of a girl, specifically an orphan.  As Audacity's arch nemesis Divinity is so quick to point out, she, Audacity, is the only true orphan at the school.  Fueled by her constant reading and longing for adventure, Audacity agrees to go on this secret mission with the Commodore.  Besides the buzzing in her left ear, a predictor of usually bad news, is up at full volume.

It seems Audacity, Commodore Crutchfield, the driver of his touring car, Cypher, and Miniver, who smuggled herself aboard in the wicker trunk, are now traveling toward the nation's capital, Washington, D. C.   Once settled in their hotel there, other characters of decidedly dubious nature, the bellman, Stanley, and Mrs. Elva Finch, make an appearance as key players in a dastardly plan involving President Taft and his family.  There are new friends whose assistance is invaluable, Juice Johnson, a local newsboy whose grandfather Daddy Dub runs the stables at the White House and the French maid, Beatrice who has been hired to care for Audacity.  And who are the mysterious petite Madame Volta and the massive Igor?

Poison, locked, money and transatlantic are only some of the words found in a web woven of intrigue with the days and hours spinning toward the New Year's Day reception at the White House.  Efforts large and small on the side of good and evil will collide.  Resourcefulness will rule the day.


When Kirby Larson creates historical fiction readers can be sure of several things in her writing; painstaking research, a true sense of place and time in the detailed descriptions and characters indicative of the time period.  The conversations between the characters, the words they use and the manner in which they speak, flesh out their personalities in our minds.  Even though those living in the story might not immediately know who can or cannot be trusted we readers start to form our own opinions until we are surprised by Larson's cleverness.

We find ourselves championing for Audacity, cheering for her friends at the school, fist pumping for her new companions in Washington D. C. and gasping at the vileness of the villains.  There are layers to the events and also to the portrayals of the people.  Here are some sample passages.

More prudent minds might label the Commodore's request nothing more than a wild-goose chase.  But what good are wild geese, if not pursued upon occasion?  Audie reflected on a Chinese proverb she'd skimmed in The People's Proverbs: "Pearls don't lie on the seashore.  If you desire one, you must dive for it."  In her short life, she had noted that, oftimes, a person is put in difficult positions for good reasons.  Reasons that are beyond comprehension.  And more than having an adventure, Audie dreamed of doing some good in the world.  It appeared that in order to gather that particular pearl, she would have to dive.  "Bees and bonnets," she said.  "I'll go." ...

...The triplets' sniffles exploded into wails.  Bimmy threw her arms around Audie's waist.  "Don't go, Audie.  Don't!"
Audie patted her comrade's back.  "What have I always told you?"
Bimmy released her grip, drawing in a shaky breath.  "That everything will turn out splendid in the end," she said.  "And if it's not splendid, it's not the end."

Juice leaned the poker against the fireplace.  "I was just thinking." he began.
The old man lit his pipe, shaking the wooden match to extinguish the flame. " 'Bout the little gal you brought 'round today?"
Juice had long ago stopped being surprised by his grandfather's intuition.  He nodded.
"You didn't find her any too soon." Daddy Dub took three puffs on his pipe.
Juice picked up a stick of cordwood. "What do you mean?"
"She's going to need our help."  He tapped his pipe on the ashtray.
"Pretty darned quick, too, 'cording to my rheumatiz.  Best to keep an eye on her."
Juice managed to load the wood into the stove without dropping it.  How did Daddy Dub know such things?  That was a mystery.
But it was no mystery that he was rarely wrong.


Audacity Jones To The Rescue written by Kirby Larson is first-rate historical fiction packed with memorable characters real and imagined whose lives run together accidentally and on purpose.  Every nuance within the plot unfolds precisely as planned by Larson. Fortunately for readers this is the first volume in a series with a hint as to the next escapade on the last page.  In an author's note and in her acknowledgments Kirby Larson further endears readers to this book and its beginnings.

To learn more about Kirby Larson and her other wonderful novels and picture books, please visit her website by following the link attached to her name.  Kirby Larson is interviewed about this title at author Janet Fox's blog.  Believe me; you are going to want to read this.  Author Barbara O'Connor talks about Audacity Jones To The Rescue on her blog, Greetings from Nowhere.
Posted by Xena's Mom at 8:48 PM