When it happens regardless of whether it's the first time or the tenth time, we marvel standing in breathless wonder.  Unless we are a naturalist with specific intentions, most of us leave the inside to go outdoors with no expectations other than to accomplish our immediate goals.  Experiencing a close encounter with a living being in the wild is a gift; some more surprising than others.

You might be reaching for a large stick wondering how it got in your yard, only to discover it's a garter snake of granddaddy proportions.  One Sunday morning this past October while standing in our new backyard, Xena and I were both shocked to see a large fox trotting down the sidewalk across the street carrying a morning meal in its jaws.  In these moments of awareness we are reminded all forms of life are sharing the same space. 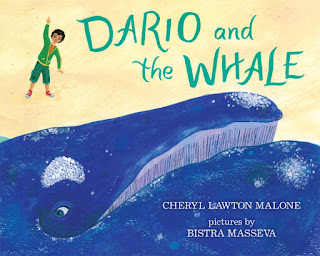 Sometimes these appearances come not only when we least expect them but when we need them the most.  Dario and the Whale (Albert Whitman & Company, March 1, 2016) written by debut picture book author Cheryl Lawton Malone with illustrations by Bistra Masseva is about a unique bond formed between a boy and a whale calf.  In a desire to belong, connections can come from places other than where we are looking.

Every spring
when the sun
wakes up the land,
Dario and his mother
move to the seashore.

They are not the only ones moving to the north.  A whale and her baby are swimming in the same direction.  Each parent is compelled to make this change based upon need.

Unbeknownst to each other, the boy and the whale are going through similar episodes in their desire to call this new place home.  Dario inadvertently destroys a sand castle being constructed by a girl on the beach.  A green turtle is the recipient of a big bump courtesy of the whale.  That is intentional.

In the afternoon, Dario, alone, racing along the beach flying a kite sees the whale breach the water.  The whale sees Dario.  Time stands still as they gaze at each other.  Both Dario and the whale excitedly reach out to their mothers with the news of this sighting.

In the following days Dario and the whale search for each other on the beach and in the water, devising signals; a whistle, a wave of hands, a spout or a breach.  Shared hours fill their mornings and afternoons.  When Dario is kept away from the shore, he worries the whale will not be there when he returns especially after comments made by the castle-making girl.  In minutes of remarkable clarity the boy receives an answer.


Sparked by a real life event Cheryl Lawton Malone writes with the sure knowledge this kind of contact can bring.  In a poetic cadence she traces the similarities between the boy and the young whale comparing the two until the defining connection.  Her word choices are specific and easily understood by the youngest of readers.

Interspersed in the English narrative are words spoken by Dario in his native language.  These help readers to further understand how Dario feels in a place far from home.  Malone is careful to define their meaning in the context of the story.  Here is another sample passage.

SPLASH!
The whale slaps the water with his tail.
His mother hurries over.


Opening the matching dust jacket and book case readers become fully aware of the splendor of being so close to a whale.  The whale's body extends beyond the spine with its tale raised high above the water.  A seagull has braked in flight to avoid the splash.  This illustration is fully alive, sending off the sounds of the shore, ocean and the happiness experienced by both the whale and the boy.  The color from the text, spine and water is carried to the opening and closing endpapers.

On the title page beneath the words two whale tails are breaching the water.  The verso and first page feature an illustration of Dario and his mother walking along the boardwalk on the bay.  Behind them are the sandy shore, the water, rocky stretches of land and a lighthouse.  Seagulls glide on the air currents as a ship moves in the distance.  Illustrator Bistra Masseva transports us to the setting with this initial image.

Most of the pictures span two pages with varying perspectives.  In one we are a seagull watching the whales arrive at the bay.  In another we are the whale watching Dario.  We may be Dario sitting on the beach looking in earnest for the whale.  To enhance the pacing Masseva selects to create a series of smaller visuals or do single page comparisons.  With each image we are deeply aware of the emotional moods through facial features and body movements.

One of my favorite illustrations is of the two whales swimming north to the bay.  Having never seen whales outside of an aquarium I can only imagine the sight of seeing them in the wild.  To see them from above, shapes partially above and beneath the vastness of the ocean is breathtaking.  The subtle shades of the water convey the ever-changing nature of the seas.  A lone seagull flies toward the lower left hand corner of this double-page image.

Illustrator Bistra Masseva graciously replied to an email inquiry about her work.  Here is what she has to say.

Images always appear in my head the moment I start reading the manuscript, forming a sequence much like the frames of a film.

Then I would research the subject (I love this part of my work) and make sketches to develop the characters. I looked at a lot of right whale photographs to get the character of the whale, well, right. ;-) Simultaneously, I would sketch out the storyboard for the book in tiny thumbnails, to determine the composition in each spread and how the different pages relate to each other. And when I finally have my visual story I would paint the illustrations by hand in acrylics.
It was a pleasure to work on Cheryl's story. I have always been fascinated by the sea and its wondrous creatures!

I was thrilled to have the opportunity to ask questions of Cheryl Lawton Malone and receive her replies.

After you saw the whale did you know there was a story to be told from that connection?

Yes, immediately after we saw the whale, I knew there was a story. I didn't know 'what' story necessarily or who would tell it or how it would end. I only knew that the climax would be the moment when a human and a whale connected. Because I'd felt that connection. The rest of Dario's story came after much work and many drafts.

I read that you have traveled across the Atlantic Ocean to live in the United Kingdom and the Netherlands.  Would you care to share more about why this happened?  Did those experiences of being in unfamiliar places help you to develop your character of Dario?

Absolutely, yes.  My father worked for an international engineering company that constructed major energy refineries.  As he completed projects and started new ones, our family moved.  And moved.  The experience of leaving school, packing up a house, saying good bye, traveling to another town either here in the US or in Europe, unpacking the house, finding new friends, and starting a new school was never easy.  My parents helped by keeping the interior of our house the same-for example, the living room couch was the same no matter if it was in The Hague or Massachusetts.  My curtains were the same.  My bed, the same.  Tuesday night was meatloaf night no matter if we were in London or New Jersey.  Without a doubt, I drew on my experience as an American child living abroad when I created Dario, having experienced first hand his need to find, any friend, and fit in.

On the jacket flap it states that Dario and his mother are from Brazil.  Have you ever visited this country?

Yes, Dario and his mother are Brazilian.  I have not been to Brazil.  Not yet!  My research tells me it's an amazing country of vibrant colors, wonderful food and passionate people.  Many hardworking Brazilians live in New England, particularly on the Cape.  I have visited another country in South America, Peru, and my husband and I are planning a hiking trip to Chile and Argentina.  As a result of traveling so much as a child, I have the travel bug.  We love to visit other countries.

At several points in the narrative, Dario speaks his native language.  These seem to be very emotional instances.  Is he speaking Portuguese?  Do you speak this language or another language other than English?

Yes, Dario speaks Portuguese, which is the official language of Brazil, and the language he learned from his mother, much like a whale learns to communicate from its mother.  Brazil was once a colony of Portugal.  Portuguese is still the language spoken by the majority of Brazilians.  Like many immigrants, Dario reverts to his first language when something important happens.  My first language is English.  I speak a little French and a tiny bit of Spanish.  As a child, I spoke Dutch fluently, but have forgotten most of it.  Unfortunately.

The illustrations of Bistra Masseva reflect the rhythm of your story beautifully.  Did you ever have the opportunity to communicate with her during the publication process?  Do you have a favorite illustration?

I agree! Bistra's illustrations are fantastic. Everything I could have hoped for. My two favorites are when the whale chases a school of herring and later when Dario asks, "But you'll come back, right?" I absolutely love Dario's face on that spread. I think he's beautiful. I have not had the privilege of talking to Bistra yet but would welcome the chance to meet and thank her. As odd as it might sound, many picture book writers never meet their illustrators. Picture books are a unique art form where the text and the illustrations push each other to a higher place, as in the proverbial whole is greater than the sum of its parts.  For that reason, publishers tend to discourage active collaboration or dialogue between the author and illustrator during the publication process.

Are you working on another book?  Can you give us a hint about the story?

I am working on another book! Yes! Yes! Several, in fact. Two are picture books - one is a DARIO type story NOT involving whales but incorporating similar themes. The second is a silly dog book inspired by my current writing assistants - two Irish wheaten terriers named Lorcan and Muri. Also, I'm mapping out a MG novel in verse set in a Montana type location involving themes of family, loneliness and conservation.

Thank you so much, Margie, for giving me this forum to express myself.

Thank YOU Cheryl for taking the time to answer my questions.  This kind of conversation makes the book experience far richer for readers.

Dario and the Whale written by Cheryl Lawton Malone with pictures by Bistra Masseva is an inspirational story when the possible becomes exciting and real.  These friendships remain; guiding us for the rest of our lives.  At the close of the book Cheryl Lawton Malone speaks about her encounter on that day at the beach.  She also talks about the North Atlantic right whale and the dangers they face.

To learn more about Cheryl Lawton Malone and Bistra Masseva please visit their websites by following the links attached to their names.  On educator Carrie Gelson's blog There's a Book for That Dario and the Whale's cover is revealed along with other insights by Carrie and her students.  Several pages are available for preview on the publisher's website. For further information about North Atlantic right whales visit ARKIVE.