Alone But Not Alone

There is beauty in our world, tiny and delicate, huge and overwhelming, every single day.  Sometimes we don't see, hear, smell, taste or touch this beauty even though it appears right before us.  Our hearts are too full of something else.  Those things of beauty, a hummingbird bending to sip nectar from a flower, a doe nudging a fawn, one child helping another child after a fall, an elderly couple reaching out to hold hands, a father rocking a fussy child in the grocery store, a mom whispering to one of the boys in her son's scout troop during a project, a neighbor's cat purring in your garden, the scent of the first lilac blooming or the feel of the sun's rays as it sets purple, gold and pink, will never be exactly the same again.  The beauty in those perfect moments is gone. 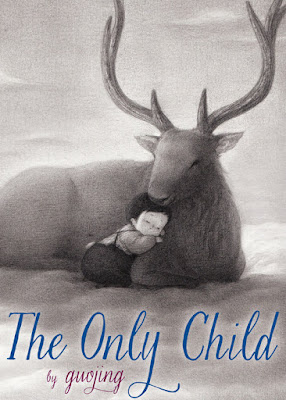 But if we long for beauty which is lasting all we need to do is look in a book.  Every time we open the covers it surrounds us.  On December 1, 2015 publishers Schwartz & Wade Books released a title which made readers marvel page turn after page turn.  It was named one of The New York Times Best Illustrated Children's Book of 2015, an ALSC, Association for Library Service to Children, Notable Children's Books-2016, and a title on the Booklist Top Ten Graphic Novels for Youth: 2016.  A first book by Guojing The Only Child is a title which will leave a mark on your heart, a breathtaking display of visual storytelling masterfully rendered.  In a beginning author's note Guojing writes:

The story in this book is fantasy, but it reflects the very real feelings of isolation and loneliness I experienced growing up in the 1980s under the one-child policy in China.

A small child awakens and receives a goodbye hug from her mother as she leaves for work.  On her own the child brushes her teeth, gets dressed and occupies herself during the morning, playing with dolls and her beloved toy deer, and looking at a picture album.  These pictures give her an idea.  After writing a note she pulls on warmer clothing, puts coins in a purse and steps out into the winter weather with an umbrella over her head.

Wandering through the city she makes her way to a bus stop, hoping to visit her grandmother soon.  Without meaning to she falls asleep.  When she wakes up the bus is empty and at the last stop in the woods.  She is alone and lost.  At home her frantic parents have found her note and they try unsuccessfully to find her.

Tearful and fearful she wanders through the forest until a large stag appears.  She follows hoping it is leading her home.  After it saves her from deep water, they travel, she on the back of the deer, farther and farther until the landscape changes with a stairway leading them into the clouds.  It is a realm radiating happiness.  The stag patiently endures her playfully tugs and pokes at its body and face.

Another small being seemingly formed from the clouds themselves, someone the child's size, appears.  They make a delightful duo and an even better trio until something gigantic surfaces, breaking through the clouds as if they are waves on an immense sea.  Soon they are spinning among the stars buoyed up by a burst of air.  As this adventure calms a cloud glides into their vision.

A mother has come to claim her child.  The deer comforts the lost girl until she falls asleep.  Two trips are made; one by the stag and the other by the child and her forest friend.  A glowing, guiding light is followed.  Gratitude and love are exchanged as the two fast friends part from each other.


There are no words on any of these pages but they hum forth from the images rendered in pencil and adjusted in Adobe Photoshop by Guojing.  The front of the dust jacket exudes warmth, comfort and security with a very real promise of an extraordinary relationship.  To the left, on the back, are nine small illustrations from the interior of the book in three rows of three after the child and the deer enter the kingdom of clouds.

A deep midnight blue covers the book case with the title placed in a small white label on the front in the center.  The opening and closing endpapers invite us into a luminous country wrought by imagination.  There is a hint of a single dot on the former and the faint shadow of a faithful friend on the latter, as if it's a memory never to be forgotten.  The text on the title page is placed in frames featuring a city and a single window with a light snow falling.

With a skill surely fueled by the intimacy Guojing has with this story, the pacing reveals every emotional instance with a shift in the size and perspective of the images.  A series of pictures create a passage of time followed by a single illustration depicting a mood which goes straight to your soul; a close-up of the child looking at the closed door with her back to us.  For a stunning impact Guojing gives readers a visual spanning two pages; the city with the child, small in comparison walking alone, the child looking in awe upward as she and the stag stand in a circle of light, or the two double-page illustrations bringing us close to the deer and the child as they say goodbye (This is movingly portrayed with a striking impact.)

The child's face is fully animated mirroring everything she feels; her sadness is profound but her joy is delightful.  The regal almost royal carriage of the deer, the details on the antlers and the fine lines of fur make you long for a similar protector.  When the cloud child peeks out from the white billows the first time like a sky bear you know the girl has found another companion.

I have so many favorite illustrations it is impossible to pick only one.  Every time I've read this book though, I've grinned at one particular set of four pictures.  In the first the stag, cloud child and little girl are standing and sitting with their backs to us as the girl looks behind them.  She notices she is the only one without a puffy tail.  Reaching into the clouds, she forms a ball.  In the final visual all three are in a row with tails.  The deer gazes at the girl as her arms are raised in victory.

Your world fades away as you enter the pages of The Only Child conceived and illustrated with exquisite care by Guojing.  We take an emotional journey with this child, hopeful every step of the way.  Most certainly this is a stunning debut for Guojing, destined to be a classic for all ages.

To discover more about Guojing please follow the link attached to her name to access her Tumblr pages. This link takes you to the Creative Authors page for her. Numerous images including my favorite mentioned here can be found at author, reviewer and blogger Julie Danielson's blog, Seven Impossible Things Before Breakfast.  Enjoy Scholastic's Ambassador for School Libraries John Schumacher's tweet.


Update:  April 7, 2016  An interview between Guojing and Lee Wade, the vice-president of Schwartz & Wade is on Nerdy Book Club.

Have you see the book trailer which is contained in the interview?