What A Dog Has To Do

It's time for humans to pay closer attention to what dogs are saying and doing.  Let's face it most, if not all, dogs are far cleverer than we can imagine.  When it comes to training we may think we are succeeding at encouraging certain behavior, if for no other reason than our desire to keep them safe, but are the results due to us or them? 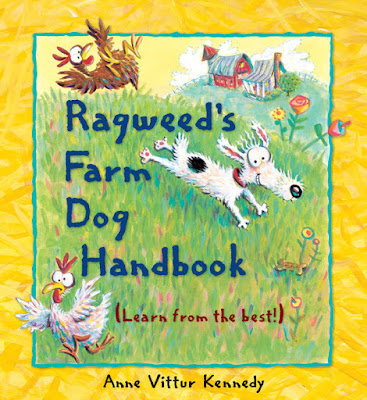 Have you ever thought they might be ensuring we react in a certain way based upon their conduct?  Ragweed's Farm Dog Handbook (Learn from the best!) (Candlewick Press, August 25, 2015) written and illustrated by Anne Vittur Kennedy is directed at the canine community, specifically those desiring to take up residence on a farm.  There is an acceptable routine with appropriate rules to follow...or not.

This guide will include all the essentials from dawn until day's end to make sure all goes well for any dog.  The first thing necessary to know is the rooster rouses the farmer even before daybreak.  This is not the dog's task.  The rooster has it covered.  Dogs will hardly be able to keep from assuming this role but they are told to not do it.  If they should happen to interrupt the sleep of the farmer, a biscuit is sure to be offered to get the dog outside as quickly as possible.

Pigs have a job requiring a lot of mud and increasing their size.  Dogs need to stay clear of them and especially the mud regardless of the lure of such deliciousness.  Baths are to be avoided BUT after the dreaded cleansing guess what a dog gets?  A biscuit?  That's right!  Are you starting to see a pattern here?

If the chickens are disturbed during egg laying, a dog should try an elaborate tale about a countryside varmint.  Chasing sheep is strictly forbidden.  Of course a dog might want to take advantage of the old saying,

When the cat's away the mice will play.

As a dog roams around the farm, they will encounter cows calmly munching on grass.  The sweet taste of this green goodness will call to a dog.  Resist this at all costs unless a biscuit has recently been consumed.  After a summation of the previously mentioned farm life fundamentals the REAL job of a farm dog is revealed.


With liberal doses of hilarity a dog's point of view is portrayed with absolute clarity in this story written by Anne Vittur Kennedy.  As each animal on the farm is discussed along with their duties, a dog is encouraged not to partake in the same actions.  On the other hand, Ragweed, scamp about the farm, has learned (and earned) the results if proper decorum is not followed.  The use of repetition is masterfully used in several different passages inviting participation by readers and listeners.  One of them is

This story gets better and better as the results of the rule-bending get a little bit more involved and a whole lot crazier.  Here is a sample set of sentences.


When you first look at the front of the dust jacket, you know without a doubt that Ragweed is a dog with his own set of tricks.  Those chickens are raising a ruckus because that's what Ragweed does.  The cheery color palette is continued throughout the book with images rendered in acrylics.  To the left, on the back, readers are given a peek at the first picture of Ragweed doing what he should not be doing.  Ragweed is lying on the farmer's rather robust stomach about to end his sweet dreams.  The border of golden yellow hay on the front becomes the background on the back with a border of rustic barn red.  Both images are outlined in turquoise.

The book case background is the same as the border on the back of the dust jacket with the spine in the straw golden yellow.  In the center on the front is the title framing a happy-go-lucky Ragweed.  The back contains no image.  This has the look of a guidebook.  The opening and closing endpapers are awash in pale green.

This handbook belongs to:

A grinning Ragweed is featured at the top with two nesting chickens holding the sign in their beaks.  A portrait of a biscuit is placed under the dedication.  On the title page Ragweed is reading his own book by lantern light in the barn, smiling in complete satisfaction.

Anne Vittur Kennedy alters the size of her illustrations to match and enhance the cadence of her narrative beginning with two double-page pictures, edge to edge, followed by two single page visuals with different framing. She does include two or three images on a page with loose framing to provide a pause and prove a point before a blast of energy.  As readers move through the story the background colors reflect the place and time of day with a pastoral richness.

The facial looks on Ragweed, the farmer and the other animals will have readers holding their sides in laughter.  The wide-eyes and mouths tell a tale of their own.  Please pay close attention to the angle of Ragweed's ears too.

One of my favorite of several pictures is when Ragweed is in the hen house.  It spreads across two pages.  Three chickens are sitting on a raised bed filled with straw.  On the far left one is sleeping.  In the middle the second hen has one eye warily open a slit looking to the right at Ragweed.  The third gal is aghast at the audacity of this dog.  Her wings are ruffled and her eyes are frightened.  Ragweed is up on his back legs with his front paws resting on the edge of the bed.  He is most definitely wearing a mischievous smile.  You will want to take notice of his teeth.


No farm, dog or humorous themed read aloud should be without Ragweed's Farm Dog Handbook (Learn from the best!) written and illustrated by Anne Vittur Kennedy.  The fun of rules meant to be broken is in the results.  From beginning to end a room with readers and listeners will be filled with mirth.  This is a title sure to be frequently requested to be read over and over.

I can only assume Anne Vittur Kennedy relishes her privacy as I could not find a website or blog for her.  She lives near Columbus, Ohio with a dog named Banjo.  At the publisher's website you can view one of the first double page illustrations. This title is a Bank Street Irma Black Award finalist.  It is also a Highly Commended title on the Charlotte Zolotow Award list.
Posted by Xena's Mom at 10:28 PM