Raise Your Voice And...

It they stop frozen in place, you do the same.  If they start to growl deep in their throats, you had better look, listen and be ready.  If they begin to howl, calling out to others, lift you head and raise your voice to join the chorus too.  When the barking starts, remember there is safety in numbers. 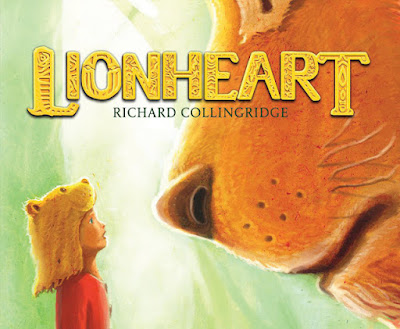 As humans fortunate enough to share their lives with canines can attest, barking or howling with your dog can be particularly liberating instilling a sense of fearlessness.  It's as if you've joined a pack as old as time.  Lionheart (David Fickling Books, Scholastic Inc., February 23, 2016) written and illustrated by Richard Collingridge (When It Snows) follows a small boy and his beloved stuffed lion during an escape; an escape leading them to place of marvelous wonders.

But what was that sound?

Terrified of the noise and what it represents, Richard runs holding his stuffed lion, Lionheart.  Together they move as quickly as possible out of his bedroom and home, through the town and into the surrounding countryside.  He can't shake the feeling of being chased.  As he travels the grass shifts turning into threes.  In his fear he loses Lionheart.

Richard does not stop until he finds himself in a jungle filled with all sorts of animals from a variety of habitats.  Before he can even enjoy the miracle of where he is, fear fills his heart.  The monster approaches.  Richard flees again.

The jungle scene blurs on either side of him as he attempts to escape.  Richard runs until someone stops him.  This someone is Lionheart!  He's huge, alive and he speaks to Richard.  Together they enjoy the magical majesty of the jungle landscape going deep into the heart of the Lost City.  Richard's fear is no longer present replaced with fun.

With sure knowledge Lionheart understands the monster is still traveling toward them.  Soon all the animals can see it.  The air is thick with fear.  Richard looks at the monster and then at Lionheart.  A lesson has been learned.


Richard Collingridge conveys through initial dialogue and subsequent narrative, the exact feelings of childhood fears, of monsters under the bed, at night.  The word choices and sentence lengths are descriptive and tightly woven.  With the repeated use of ran and running we are particularly aware of his unease and the nearness of the monster.  This pushes us making the moment when Richard runs into a fully grown and alive Lionheart all the more spectacular and the following time of play more meaningful.  Here is a sample passage.


When you first see the front matching dust jacket and book case, it's hard not to gasp.  You know the boy wearing the lion's head hat is experiencing something out of the ordinary.  Luminosity acts a bridge between the two noses.  Intricate gold foil designs color the title text.  To the left, on the back, we are looking through a light-filled tunnel of trees taking us into the jungle.  The opening and closing endpapers are a replication of the pattern on Richard's bed blanket; darker orange lion silhouettes on a pale orange canvas.  Beneath the title page words is the stuffed toy lion with the Lionheart tag showing.

Richard Collingridge alternates between large double-page images, slightly smaller illustrations leaving a column for text and black and white sketches which extend the narrative, a series of paneled visuals on a single page, edge to edge single pages and single pages framed in varying amounts of white.  He dazzles us with a rich color palette brimming with atmosphere.  He takes us close to Richard to emphasize an emotion and then alters the perspective giving us a panoramic view of the city, jungle or Lost City.  Your wildest dreams of a royal realm of animals in a fantastic setting are realized.

The details in the decor in Richard's bedroom allow us to understand his love of animals as does his red pajamas with the lion's tail attached in the back.  The mix of vividly hued, spotted mushrooms, scampering squirrels, exotic plants, moose, tigers, giraffes, rabbits and numerous birds along the jungle path and within its glens convinces us of the magic found in this place.  You can hear the sound of the water falls as Lionheart and Richard move beneath it, sun sparkling on drops.  Each picture is like a separate part of a fabulous whole.

One of my favorite illustrations, on a single page, is on a background of white.  Richard is standing still, head and eyes raised.  We can only see the upper portion of his body.  The lion's head hat appears as if it is looking at something too.  Richard's face is glowing in astonishment as he stands at the entrance to the jungle.  You know he has just inhaled.


Lionheart written and illustrated by Richard Collingridge is a beautiful portrait of a journey toward facing your fears.  It goes straight to the child's heart in all of us reinforcing the comfort and courage to be found in a stuffed toy companion.  Before story time you might want to make sure you have a stuffed toy lion available for readers to hold.  There is magic to be made.

To discover more about Richard Collingridge and his other work please follow the links attached to his name taking you to his website and blog.  In an article at The Guardian Collingridge shows readers How to draw...from your imagination.  Enjoy the trailer.