I may have mentioned more than once about my parents growing up during the Depression in the United States.  This translated into my sister and I living in a home with economy in all things stressed.  You did not stand in the shower with the water running.  You got wet, turned off the water, soaped up and turned the water back on to rinse.  The end.  You only turned the lights on in a room when you entered.  When you left, off went the lights.  Our clothes were hand-me downs or hand-sewn.  We hung our laundry outside weather permitting or on lines strung in the basement.  My parents never had a mortgage or a car payment. I was an adult before they owned a credit card, used a check book and finally purchased a clothes dryer.  There was no extra but our lives were rich in other ways due to the frugality and creativity of Mom and Dad.

This practice became invaluable when I found myself in my twenties living in a tent for several months and then in motel rooms for several more months.  Finally with a home built, times were still tough.  Many evenings arriving home from work meant going out into the woods to cut wood for heat because the cost of fuel was too expensive.  There were nine weeks without a trip to the grocery store so money could be used to pay bills and provide food for my two black Labrador friends. These experiences taught me to be exceedingly grateful for what I have today and to be exceedingly compassionate for those who do not. 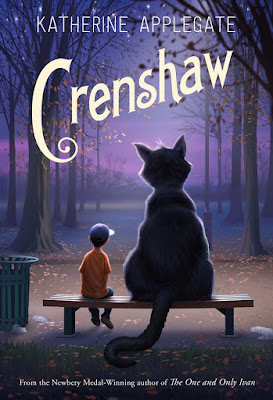 When my ARC and swag purple package for Katherine Applegate's newest title Crenshaw (Feiwel & Friends, September 22, 2015) arrived I did not open it.  When I purchased more than one copy at a local big box store and from a bookshop, I did not read them.  I was waiting for the right moment, wondering how Katherine would tell this story.  Several weeks later as soon as I read the first sentence I knew I would not be able to stop reading until I finished the final word.

I noticed several weird things about the surfboarding cat.

It's a little bit unsettling to realize you are the only person on a beach in June to see a surfboarding cat that opens his umbrella too soon and then floats over your head.  After closing your eyes and counting to ten, the cat and the dropped umbrella eventually vanish but not before you recognize him.  It has been years since you've seen him; he is an imaginary friend after all.  Why are you seeing him now?

Jackson is about to begin his fifth grade year in school.  This guy deals strictly in facts wanting to become an animal scientist as an adult.  He and his best friend, Marisol, have started a dog-walking business, See Spot Walk.

When four purple jellybeans, Jackson's favorite flavor, appear in the middle of a cerealball game with his five-year-old sister, Robin, he is sure Crenshaw is in the vicinity.  Cerealball is a game of having the right aim plus it helps to chase away the hunger pangs.

Three years ago when Jackson was seven he first saw Crenshaw.  Lots of guys and gals have imaginary friends so he took it in stride not even wondering why the cat chooses then to appear.  Now when questioned Crenshaw says imaginary friends must be invited.  He asks Jackson to tell the truth.

As Jackson probes for real answers, we learn of his family living in a minivan when he was seven.  We understand the strain of a father forced to leave a job due to a debilitating illness, a mother working three jobs because her teaching position is cut and of the necessity and humility of playing your guitar on a busy street corner to earn a meager amount of money for your family.  The sadness of having to sell all your possessions except those filling a grocery bag at a neighborhood yard sale is deeply felt.

Crenshaw is unable to leave Jackson, engaging him in conversations about the current state of his family's crisis.  The boy comes to the realization there is only one plan which will work but Robin unknowingly circumvents his idea.  After several poignant scenes Jackson feels deep in his heart the value of holding on to a little bit of magic for as long as you need it, even if your head tells you otherwise.

Divided into three parts Katherine Applegate opens each with a quote from A Hole Is To Dig: A First Book Of First Definitions written by Ruth Krauss with illustrations by Maurice Sendak.  This is Jackson's treasured childhood book.  Each part, a blend of now and three years previously, completely captivates readers with short chapters containing profound truths within, at the beginning and end of each.

The dialogue between Jackson and Crenshaw is wise, wonderful and funny.  It's not every day a large cat who enjoys taking bubble baths is part of your world.  In talking with his parents, sister and best friend we come to respect and love their individual personalities.  Here are several example passages.

It was late, June, nice and warm, but I shivered.
I felt the way you do the instant before you leap into the deep end of a pool
You're on your way to somewhere else.  You're not there yet.  But you know there's no turning back.

Maybe that's why I liked the name Crenshaw.  It felt like a blank piece of paper before you draw on it.
It was an anything-is-possible kind of name.

"Well, what if you are visible?  I can't let you just walk down the hall to my room.  What, if my dad wakes up to get a snack?  What if Robin has to go to the bathroom?
"She doesn't have a litter box in her room?"
"No. She does not have a litter box in her room."
I pointed to the toilet.
"Ah, yes. It's all coming back to me now."
"Look, we're going to my room.  Be quiet.  And if anybody comes out, just, I don't know, freeze.  Pretend you're a stuffed animal."
"Stuffed?" He sounded offended.  "I beg your pardon?"

Having no permanent home or regular income and going hungry is a tragic truth for too many people.  Crenshaw written by Katherine Applegate depicts this reality through the voice of a ten-year-old boy and his imaginary friend.  It will find a place in your heart, counsel your head and give you hope.  I urge you to read this more than once and share it as often as possible.