To Heed Or Not To Heed...That Is The Question

It would seem when it comes to following written instructions, directions, commands or requests, people fall into two distinct categories, those who do and those who don't.  If you comply you may save time, reap rewards and spare yourself trouble.  If you fail to observe what is asked you may find yourself and others in a bit of a predicament. 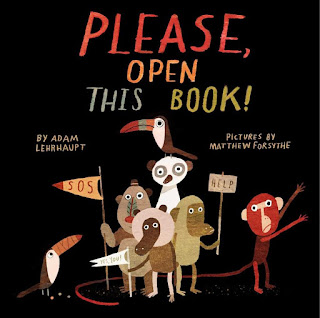 Hello?
Finally!
Quick.
Someone turn on the light.

A monkey holding a lantern is jubilantly shouting.  You have saved the day by opening the book.  The last reader trapped the entire company of characters inside.  Survival cost them dearly, physically and emotionally. Their final fruit is looking like something dragged from the garbage bin.

They are attempting to catch the responsible culprit; hopeful you have seen him.  As they continue to patch up the mess, you are asked to leave the book open.  You are not to turn one more page.

Promises are made if you simply walk away now. What!?  How could you turn another page?  As a reader you can't help it.  You fail to understand their reasoning.  You wouldn't think of ensnaring these poor innocents.  Would you?

Panic and pleading is evident in the expression of the narrator.  A bribe is offered; well at least a half of a bribe.  STOP! STOP! STOP! That ends that...or does it?

Adam Lehrhaupt has infused an array of emotions in the voice of the narrator.  We sense the relief felt by our presence.  We understand the plight of the animals.  We are aware of the damage done by our predecessor.  We knowingly nod when given a promise and presented with a bribe.

Despite all this we are persuaded to proceed by the cloak of comedy covering the narrative.  We willingly wear it as we march toward the end trying not to laugh.  But it's hopeless thanks to the adept use of language by Lehrhaupt.  Here is another sample passage.

We're still fixing things from last
time.  So you should leave this book
open.  Just put it down.
Step away from the book.


As a companion, comparison and reversal of the first title, the first thing you notice is the black background as opposed to the white in the initial book.  This serves to showcase the wide-eyed look of the inhabitants due to fear and lack of light.  The pennants held when coupled with the facial expressions begin the hilarity.  You will have to read the book to discover what the back on the matching dust jacket and book case reveals.  The opening endpapers are completely dark.  The closing endpapers highlight what your deed has done.  Before the story starts sign-holding characters offer suggestions to the readers.

Rendered digitally by Matthew Forsythe the illustrations elevate the words of Lehrhaupt by telling us more than the text.  The alligator wearing a sling and a cast, the toucan's bill wrapped in bandages and the lemur hiding beneath a cardboard box provide us with a visual as to the extent of the destruction done.  The close-ups of the banana and the monkey's face will have you bursting out in laughter; as will the papers strewn about the floor as a gorilla types, hunt and peck fashion.  The font color and placement of the text adds to the telling, becoming part of the visual whole.

One of my favorite illustrations is of the narrator promising to change the story, making it better.  We see him on the left; body language suggesting the sincerity of his words.  On the right sits the gorilla typing in earnest.  The same word appears over and over, page after page.  They are both looking straight at the reader.  It's impossible not to grin.  It's impossible to believe the monkey.


Please, Open This Book! written by Adam Lehrhaupt with pictures by Matthew Forsythe captivates readers with an invitation to participate.  It's a read-aloud gem with every page turn.  It's destined to be a family and classroom favorite with repeated requests to "read it again."

By following the links attached to their names you can discover more about Adam Lehrhaupt and Matthew Forsythe at their respective websites.  Six interior images are shown at the publisher's website. On Watch. Connect. Read. the blog of Scholastic's Ambassador to School Libraries, John Schumacher hosts the amazing book trailer premiere and a post by Adam Lehrhaupt.  To see how this all began, read You've Been Warned... a question and answer with Adam Lehrhaupt and the book trailer reveal for the first book.  UPDATE:  November 20, 2015 Adam Lehrhaupt and Matthew Forsythe chat with teacher librarian Matthew C. Winner on his Let's Get Busy, Episode 208 podcast.