There are still forty-one days until the December solstice but a chill is in the air, trees are nearly bare of leaves and needles, and snow is staying on the mountain tops.  It's a time to gather wood for cozy fires, check furnaces and gas fireplaces, take wool blankets and flannel sheets out of storage, and locate mittens, hats and scarves.  Poles, snow shoes, sleds, snowboards, skis and ice skates move from the back corners of sheds and garages to the front. 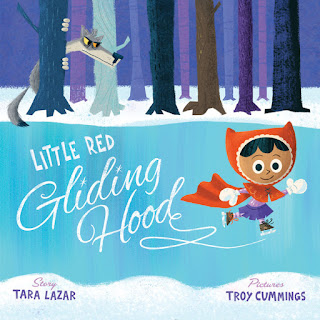 We all watch and wait for the snow to fall deeper and deeper.  We all watch and wait for those chilly temperatures to turn our water wonderlands into frozen stages for our skating dances and games.  In the realm of fairy tales and nursery rhymes the residents are as eager as we to shift into another season.  Little Red Gliding Hood (Random House, October 27, 2015) written by Tara Lazar with pictures by Troy Cummings follows a familiar girl among a cast of well-loved characters as she searches for a way to win.

It was winter, and the river winding through the enchanted forest was frozen solid.  A girl raced down to the river's edge and laced up her skates.

As she moves with the same grace as swallows on currents of air, we can easily see why the people have named her Little Red Gliding Hood.  She looks at her skates wondering how she will continue going to her Grandma's house every Sunday.  They are falling apart at the seams and too small.  Up ahead a group has gathered around a proclamation banner.

It's an announcement for a skating competition.  The winner will receive a pair of new skates. Little Red has to win.  Little Red knows she can win.  Little Red needs a partner but everyone already has someone or they have more excuses than Jack has frost.

Flying as fast as her feet will go to avoid the Big Bad Wolf Little Red arrives at her grandmother's cottage.  Her suggestions of the Gingerbread Man and Baby Bear won't work; too fast and Goldilocks snagged the little cub first.  As luck would have it, The Three Little Pigs were Grandma's new neighbors.

Someone was not too happy to hear Little Red utter

Someone started skating with purpose in pursuit.  Little Red raced across the ice but her skates could not take the strain.  One left her foot as she toppled toward the ice.  With outstretched arms the wolf, the big bad one, caught her.

Displaying all the gallantry of Prince Charming, this waltzing wizard on ice pays Little Red a compliment.  What?!  This is beyond her comprehension and her knowledge of this cunning creature.  It does give her an idea though.  This idea grows until it becomes a plan; a plan which turns into a day everyone in attendance will remember, especially the couple wearing new skates skimming along the frozen river into the sunset.


The four sentence introduction to the title page is our prelude to the skillful use of rhyme, repetition and alliteration by author Tara Lazar.  With her words our world fades away; replaced by the enchanted forest.  With ease the persons and animated items from classic children's literature find a new home in her spin on this timeless tale.  Here are a couple of sample sentences.

Little Red's skates were worn-in and worn-out, no longer snow white, and a little too tight.
She frowned at the creases and crumples.


When you first see Little Red gliding in her hood on the ice you know she's in her element.  This gal loves to skate.  You also believe she's oblivious to trouble lurking in the woods along the river.  To the left, on the back and behind her, are folk from nursery rhymes and fairy tales, The Three Blind Mice, Humpty Dumpty, one of The Three Little Pigs, The Queen of Hearts and one of the Seven Dwarfs.  They are wearing winter attire and a variety of expressions.

On the opening and closing endpapers Troy Cummings has placed snowy evergreens and snowflakes in a pattern of blues and diamonds.  The following double-page spread gives readers an overview of the enchanted forest with the river winding around a gingerbread house, castles, The Three Bears, Little Bo-Peep and her sheep, a beanstalk rising into the clouds, a golden braid of hair draped down the side of a tower, and other icons we know.  This takes us to the close-up of Little Red, cape billowing out behind her holding the title text, on the second double-page image.

Cool hues with an array of vivid shades color the illustrations in all shapes and sizes throughout this title. Cummings may zoom-in to perfect a point in the narrative or give us a larger perspective to increase our understanding of Little Red's world.  He crosses the gutter flawlessly with the river or inside Grandma's cozy abode.  We pause to look at the details he cleverly includes.

One of my favorite pictures is of the skating competition.  The crowd of characters on the ice is brightly portrayed.  On the outside the spectators are outlined in blue and shaded in pastels.  It works very well drawing our eyes first to the inside where we see oodles of charming friends from books we love. When a boy cries

he surrounds that word in pink.  The wolf looks quite debonair in his clothing.


Little Red Gliding Hood written by Tara Lazar with pictures by Troy Cummings is fractured fairy tale fun during any season but it's absolutely perfect for the winter months.  As the words are read or heard heads will nod knowingly when they hear familiar names.  You will want to have all those other rhymes and tales ready so readers can enjoy them and this title again and again.  You might want to do a comparison with Little Red and the Very Hungry Lion and Ninja Red Riding Hood.

To learn more about Tara Lazar and Troy Cummings and their work please follow the links attached to their names to access their respective websites.  Tara Lazar has several blog posts dedicated to this title.  The link is here.  At the publisher's website you can view the endpapers, introduction and title pages.  Little Red is interviewed at The Little Crooked Cottage.
Posted by Xena's Mom at 2:38 AM