When a version of the phrase,

you are what you eat,

originated nearly two hundred years ago, it was meant to imply food will determine the state of your health.  Today with the plethora of specialty cookbooks, diet plans, nutritionists and chefs with star status the definition remains intact.  In fact scientific research supports the belief certain ingredients consumed will heighten and lengthen or conversely prove detrimental to our lives. 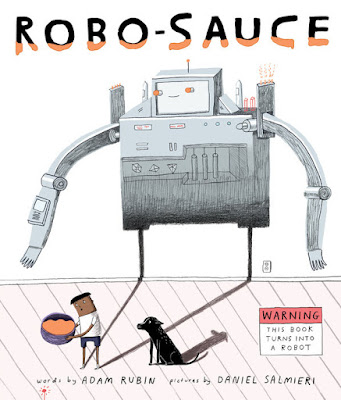 Author Adam Rubin and illustrator Daniel Salmieri, the collaborative team who brought us Those Darn Squirrels, Those Darn Squirrels and the Cat Next Door, Dragons Love Tacos, Those Darn Squirrels Fly South, Secret Pizza Party, and Big Bad Bubble, have combined their considerable talents and love of wacky wildness to explore the notion of whipping up a special potion.  In Robo-Sauce (Dial Books For Young Readers, October 20, 2015) we discover with the right stuff dreams can and do come true.  Get ready readers!

A boy and his dog creatively attired in robot wear annoy their family with typical mechanical mannerisms until everyone leaves the room. An unseen narrator speaks to the possibility of a potent formula designed to turn the consumer into

As fate would have it, this party happens to have a recipe named BOOM.

The common household ingredients so named are like a list of make-believe mojo.  Once mixed the neon-orange goop needs to be taken a spoonful at a time.  When that does not work, the voice recommends the boy dump the whole concoction over his body.  As an apology is being issued due to the lack of any kind of transformation, the page explodes into sound.  SHAZAM! The boy is now

After going on a rampage around the neighborhood, this newly created mass of metal realizes no one wants to be around this type of destructive force.  The narrator wrongly assumes the boy will want an antidote.  Instead a portion of his anatomy produces MORE Robo-Sauce which he promptly uses to zap his family and canine companion.

When the narrator, who has totally lost control of the story, makes an observation, the boy robot speaks a command.  Under the spell of his magical mayhem we have no choice but to obey.  We manipulate, we turn, we open and read.  SHAZAM! We are surprised.


By the time I finished reading this book written by Adam Rubin multiple times, I realized a smile was on my face as I read from cover to cover and then some.  The voice of the narrator, clearly bold, is also speaking in confidential tones to the intended audience in their language.   We become, without any direct awareness until near the end, avid participants in the story.  It's the word choices and pacing which envelope us.  Here is another sample passage.

Jumping Jingleheimer Schmidt--it worked!  I mean, of course it worked...Hey, ROBO-KID! Check out your sweet blinking lights and sparkling antennas.  Listen to those beautiful "Beeps" and "Boops."

Now you can do all the cool stuff you never got to do when you were busy not being a robot.


As someone who immediately removes the dust jacket on a new picture book, it was interesting to note this title has none.  Running your hands over the book case you discover the warning label is real and raised.  The Robo-Sauce color dripping from the title text, the boy, his dog and the robot all address events to come.  Careful readers will wonder about the tiny blinking red dot at the bottom.  On the back of the book case the dog is placed in his robot costume beneath an introduction which would normally appear on the inside of the jacket flaps.  Underneath we have text traditionally located on the back jacket flap.  No space is wasted.  Opening the cover the title page and verso greet readers.

In a series of images, some double-page spreads, others single pages or a group of smaller pictures on one page, Daniel Salmieri, using a limited color palette, elevates the fun of this story to new heights.  Using pencil, ink and a computer his illustrations create a cast of quirky characters in unbelievable settings.  As the story shifts to the conclusion, we can feel the emotional mood change in the expressions and body postures.

The paper engineering, invitation and instructions to the reader are nothing short of marvelous.  The different background and texture are sure to elicit true glee.  Even after reading it repeatedly the result is as good as the very first time.

One of Xena's favorite illustrations (and mine) is a two-page spread, a close-up, of the dog after it's been covered in Robo-Sauce.  A two-word comment

is placed on the white background.  Metal has replaced fur.  The eyes are glowing orange.  A small blinking antenna sticks up out of the head.

appear on the language screen.  The two back legs are different from the two front legs, designed for special purposes.  I burst out laughing when I saw this.


Adam Rubin and Daniel Salmieri hold in their hearts and minds the ability to maintain all the joys of being a child.  Robo-Sauce is a celebration of inventiveness and a reminder to step back, being free to play.  Please read this title over and over and share it as often as you can.

To learn more about Adam Rubin and Daniel Salmieri and their other books,  please follow the links attached to their names to access their websites.  A special website has been created specifically for this book.  It's packed with beep-boop-bop goodness.  Author, reviewer and blogger Julie Danielson talks with Adam Rubin and Daniel Salmieri about Robo-Sauce at Seven Impossible Things Before Breakfast.  There's lots of artwork and laughter there.