When nothing else makes sense, it's good to go back to the beginning.  It's important to focus on the tried and true, on those things which remain the same.  In any language, written, spoken or read, each relies on their respective set of letters, their alphabet.  These letters represent the pebble dropped in the pond from which rings spread outward.

In our alphabet twenty-six letters form a foundation from which wonder quietly goes forth, silently awaits discovery or excitedly reveals new knowledge.  Two outstanding alphabet books written and illustrated by notable names in children's literature were released this year.  8: An Animal Alphabet (Orchard Books, an imprint of Scholastic Inc., July 28, 2015) written and illustrated by Elisha Cooper displays an array of creatures from around the world.  Alphabet School (A Paula Wiseman Book, Simon & Schuster Books For Young Readers, September 8, 2015) written and illustrated by Stephen T. Johnson asks readers to look more closely at those everyday things outside, around and inside their learning spaces.

Elisha Cooper begins his title with an introduction requesting something interesting of readers.  Within each representation of a letter one animal will be found eight times.  Here is the * portion of his introduction. 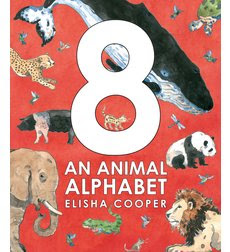 A letter may be defined with as few as one animal, x is for xerus, or as many as eighteen, salmon, sandpiper, seagull, sea horse, seal, sea turtle, shark, sheep, skunk, sloth, slug, snail, squid, starfish, swallow, swan and swordfish.  We seek and find critters wild and domestic.  We note animals from the air, land and sea.  Every continent is represented.

Ants and anteaters casually roam together.  A butterfly flutters near a bison's nose.  Mouths open the letter E creatures are raising the noise level.  Three lionesses seem to be hungrily eyeing a moose.  A walrus questions the abundance of warthogs.  There's a zebra dove?

After the feature for the letter Z we see the words The End with an asterisk placed in the middle of the following page.  The asterisk directs us to four pages of single sentence fun facts about each of the animals.  There are one hundred, eighty-four in total.  Many captivating tidbits are further shared along with an author's note about sources and acknowledgements.

Opening the rich rust dust jacket readers are invited to explore and locate the special eight in a design spanning jacket flap to jacket flap.  The book case is a beautiful blend of all the animals painted on white.  Each of the endpapers highlights twenty-six creatures, one for each letter of the alphabet.  Across the verso and title pages Elisha Cooper spreads a line of his animals heading from left to right to find their spaces in the interior.

On most of the pages an insect, beast, bird, amphibian, reptile, or sea dweller will be on or very near the designated letter.  Soft, flowing brush strokes detail physical characteristics.  Notice the eyes on each of the creatures.  The eight are portrayed in individual shapes, sizes and positions.

One of my favorite of several letters is G.  Cooper selected to picture a gazelle, gerbil, gibbon, giraffe, gnat, goat, goose, gopher, gorilla, grasshopper, groundhog and a guinea pig.  The eight goats are in a variety of types and colors as well as varying in age.  The grasshopper clings to the underside of the capital G.  The gorilla is looking at the gnat hovering nearby his face.  Each of the body postures on this page (on all of them) suggest liveliness, the ability to move at any moment.

As he did in the Caldecott Honor award winning, Alphabet City, Stephen T. Johnson tours common ground but shifts his vision looking for the highly visible twenty-six symbols. A ladder in a library begins the journey.  A shadow on a bus falls in second place. 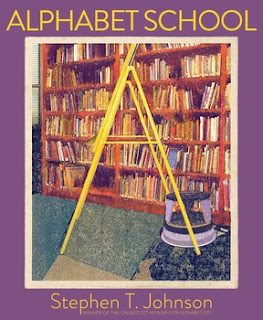 A globe, a painted playground strewn with wood chips, a partially eaten lunch, stair rails, and a pencil sharpener crank under his careful eye become word builders.  Several of the detected letters begin the words of which they are a part.  Johnson lets his readers know there is no set time of the day, month or year for spying letters; different seasons are part of the composition.

Before the first page in an author's note Johnson advises readers to look around with a discerning eye.  In the twenty years since the publication of Alphabet City

I have been delighted by the creative booklets, imaginative drawings, alliterative letters, and intuitive photographs sent to me by students, teachers, librarians, and parent who have used the images I generated to draw associations in their own worlds...

You never know what you can find in the least likely places when you are looking.

The matching dust jacket and book case draw in readers with the complimentary colors of purple and yellow.  On the back, to the left, the letter Z is showcased in a painted parking lot.  Bright yellow opening and closing endpapers continue the theme.  Images from the interior become the beginning letters on the title page.

monoprints on paper and digitally enhanced

each letter, if not at first, noticeable will slowly appear to patient readers.  Stephen T. Johnson cleverly connects us to additional details in the prints.  For the letter C a captured angle of the metal holding the globe is seen.  Beneath this object are stacks of books in bins on a shelf.  One is titled C is for Continents!  The grainy texture on the images helps to make us feel as if we are hunting after hours for these hidden gems.

One of my favorite illustrations is of the pencil sharpener, the only one to span across two pages.  It took me longer than the other pictures to find the letter L.  I like the way Johnson brings us in close to the object but does not alter the size.


These two titles, 8: An Animal Alphabet written and illustrated by Elisha Cooper and Alphabet School written and illustrated by Stephen T. Johnson are highly recommended for your classroom and library book shelves.  I know they will find a spot in my alphabet book collection.  They are two completely different approaches to the wonderful twenty-six but they accomplish the same thing; they help you to see with new eyes and make you eager to explore more.

By following the links attached to Elisha Cooper's and Stephen T. Johnson's names you can access their websites.  They reveal more about them and their work.  Elisha Cooper was a guest at author, reviewer and blogger Julie Danielson's Seven Impossible Things Before Breakfast. Elisha Cooper has been posting items on his Facebook page about the process for this title.  You can view eleven interior images of Alphabet School at the publisher's website.
Posted by Xena's Mom at 6:10 PM