The Soul Of A City

The last week in August 2005 a nation, admittedly persons around the world, watched with growing alarm as a force of nature spun toward the southern edge of the United States.  On the 29th it reached landfall along the Gulf Coast.  Hurricane Katrina stretched some four hundred miles with sustained winds reaching between one hundred and one hundred forty miles per hour. The loss of life, the loss of a way of living and personal property was catastrophic. 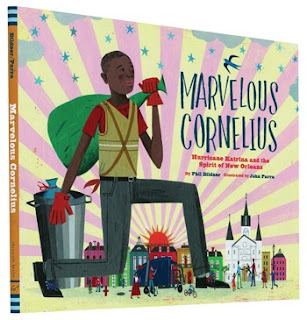 One man, Cornelius Washington, in the wake of devastating destruction dug deep into his heart doing what he had done daily.  Marvelous Cornelius: Hurricane Katrina and the Spirit of New Orleans (Chronicle Books, August 4, 2015) written by Phil Bildner with illustrations by John Parra is an inspirational tribute to an extraordinary human being.  His strength in the face of events beyond his control was a spark that fueled flames in others.

In the Quarter,
there worked a man
known in New Orleans as Marvelous Cornelius.

Cornelius was known for his cheerful salutations to all he saw each morning, afternoon and evening on his route.  Men, women and children raised their hands and voices in returned greetings.  Cornelius was a sanitation worker spreading joy throughout the city riding on the back of the big truck.

This man took tremendous pride in his work; realizing we all have jobs to do, so we need to do them in the best possible way.  His calls rang out like trumpets.  His beats on the side of the truck and clashing of lids were like the matching percussion in a big brass band.

He moved from curb to truck with the skills of an acrobat and the smoothness of a dance king, bags sailing through the air.  People happily paused to watch or join Cornelius, marveling at the magic he dispersed.  This all stopped when the storm struck.

The mighty wind and water stirred the city into a stew of destruction.  When they finally receded Cornelius felt the weight of the world on his shoulders as he saw the piles of rubble farther than his eyes could see.  He sobbed.  He then got to work from the back of his truck.  So did others in his city, the state, and the nation.  One man's spirit rallied others then and still does today.


One person can make a difference.  Once man's presence can brighten a day and lighten a load.  Phil Bildner gives respectful recognition to such an individual with words lifting off the page like the notes in a song, sung in a storyteller's voice.  Bildner has Cornelius acknowledge three distinct people as the story begins.  They play an essential role toward the end of the tale.  Alliteration describes the worker's day.  The rhythms in the Crescent City ring out in this man's every action.  Here is a passage.

BANG!
He clapped the covers like cymbals and
twirled the tins like tops.  Whizzing and
spinning back and forth across the street.


Rendered in paint the two separate illustrations seen on the front and back of the matching dust jacket and book case speak to the spirit of the man and the work ethic he presented to all who encountered him.  The perspective on the front depicts Cornelius as a larger than life figure in the city he loved.  The rays of the sun are akin to the rays of cheer and go-to attitude of this man.  He was a sunrise to the people before and after Katrina.  To the left on a background of burnished orange Cornelius is waving as he rides on the back of the truck.  On the opening and closing endpapers forty-eight different symbols of the city are patterned in small rectangles.  A city street, a row of houses, spans from left to right as the truck passes on the verso and title pages.

Single page and double-page images display a full range of color with a nod to the architecture of the vibrant city of New Orleans.  Greens, blues and the blush of dawn provide the background colors.  Readers will note the bluebird, a symbol of happiness, seen in the first picture is visible repeatedly throughout the book.  When Cornelius makes a decision to begin his work after the storm even though the odds against him are huge, the bluebird returns with a sprig of green.  This is most definitely a nod to the receding of the waters and sadness being replaced with determination and hope.  The tiny details, ants in the street, logos on the discarded items Cornelius picks up, the clothing worn by the residents, the vines growing on railings, a bee on a string of lights, street musicians, an umbrella caught in the wind, the type of boats on the water, and the NY 2 NO on the side of a bus tell us about the care John Parra takes when creating his visuals.

One of my favorite illustrations is the first one of Cornelius kneeling in the center of a street, a can held in one hand, a bag in the other.  He is smiling as he looks at a bluebird perched on a curved handle poking from the can.  Rays are radiating behind him.  On either side are rows of homes people out and about enjoying the day.  At the top two ribbons arc from a star on the left is New, on the right is Orleans.

Readers, this reader, can't help but feel gratitude toward author Phil Bildner and illustrator John Parra for bringing our attention to this man in Marvelous Cornelius: Hurricane Katrina and the Spirit of New Orleans.  The text and images raise it to the status of tall tale as intended but the truth of this life well-lived glows on every page.  Phil Bildner explains further in an Author's Note.

To learn more about Phil Bildner and John Parra and their other work please visit their respective websites by following the links attached to their names.  If you go to the publisher's website there are several interior images and a teacher's guide.  Two years earlier John Parra was a guest at author, reviewer and blogger Julie Danielson's Seven Impossible Things Before Breakfast.  Two years ago Phil Bildner stopped by Scholastic's Ambassador for School Libraries John Schumacher's blog Watch. Connect. Read. Stop by Latin@s in Kid Lit to read In the Studio with Illustrator John Parra.  A series of blog posts at Color Me a Kidlit Writer showcase this title.  Phil Bildner talks about A Modern Day Folktale: MARVELOUS CORNELIUS Blog Post.  CELEBRATING THE SPIRIT OF NEW ORLEANS 10 YEARS AFTER KATRINA is an essay by Phil Bildner revealing the story behind this book.  Teacher librarian Matthew C. Winner talks with Phil Bildner and John Parra in Let's Get Busy, Episode #175 podcast.  John Parra reads this title aloud on KidLit TV.  You are going to enjoy this.