A Double Dose Of Cheer And Chuckles

Laughter, most importantly the laughter of children, especially when everyone is celebrating something funny together is seriously one of the best things in the world.  Guys and gals are quick to see the humor in a given situation, even those tucked in the corners of picture book images.  Once they get started, sometimes they can't stop.  And you don't want them to either.  You want to bottle it up to save for those days when laughter is elusive. 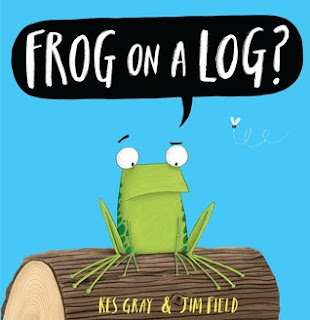 A measurement of mirth every single day is a necessity even on the good ones.  It's even more important on those days with good things in them but everything else seems to be out of control.  There is nothing like picture books as a salve to sooth your harried soul.  Author Kes Gray and illustrator Jim Field have collaborated on two titles certain to supply more than enough grins, giggles and guffaws.  The first Oi, Frog! was originally published in February, 2014 by Hodder Children's Books in the United Kingdom.  This year it came to the United States August 25, 2015 as Frog On A Log? published by Scholastic Press, an imprint of Scholastic Inc.

A sassy, I'm-in-charge-here, cat issues a command frog is inclined to not obey pointing out the hardness and abundance of splinters one encounters when using a log as a seat.  The fussy feline continues to insist.  When the frog enquires about sitting on the mat, the cat replies the mat is strictly for cats.  And the chair is only to be used by hares.

Moving toward a stool cat firmly mentions mules and no one else is to sit on stools.  A pattern is forming with each request from frog and each answer by cat.  Sitting on a sofa is, of course, forbidden.  Curious now, frog shifts the line of questioning.

Where might lions or parrots sit?  Neither of those places sounds appealing to frog whatsoever.  Cat is quick to mention comfort is of no importance; being proper is.  Foxes, fleas, goats, cows and storks are looking a tad bit odd when seated.

Fifteen more animals are named. With the speed of a ping-pong champion and a growing disbelief at frog's lack of knowledge, Cat assigns places for posteriors.  One final query leaves frog in a bit of a quandary.  Woof! Woof! 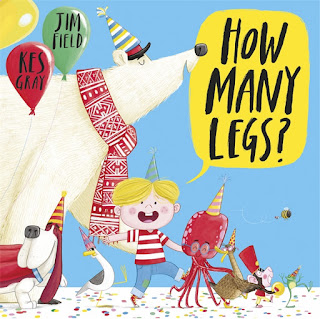 The second title, How Many Legs? (Hodder Children's Books, February 5, 2015), poses the question seen in the title repeatedly. You become so captivated by the guests and their companions appearing, counting, while important, is secondary to the splendid array of arrivals.  It's a participatory party and all are invited.  You simply open the book.

A cake-carrying duck wearing hair rollers waddles into view followed by a leaping hippopotamus in a pink tutu.  A trail of colorful cookies lures in a superhero hound shadowed by a cymbal-playing chimpanzee.  Is that zooming seagull wearing a pirate hat?

As the company of companions grows, the food on the table multiples in amounts and variety.  The crunching and munching crew welcomes two more happy hoppers.  A surf and turf animal combo romp into the room.

In all shapes and sizes, tiny, medium and large, the numbers swell.  They fly, climb, creep, crawl and saunter to join the jamboree.  With the treats nearly consumed, a record spins on the turntable.  It's time to jump and jiggle, swing and sway.

WHOA!  How did he get here?  The party pauses, everyone frozen in place.  With the final fellow filling out the list (and every ounce of space), it's time to tally.  How Many Legs?


In both books Kes Gray must have been guided by a heart full of hilarity.  His combinations of rhyming couplet words are absolutely absurd never missing a beat in his cadence of comedy.  Animals and their derrieres and festive friends celebrate with every page turn.  Here are two more passages from each title.

Why would the
number stay the same
if a slug, a snail and a
maggot came?


Bold, bright, cheerful colors greet readers on the dust jackets and book cases of each title illustrated by Jim Field.  Turquoise, pink, shades of green, yellow, blue, brown, gray, purple, red and black illuminate the cast of characters.  In the first varying background hues highlight the animals.  In the second usually white but sometimes blue, green or yellow showcase the animal antics and their legs.

The opening and closing endpapers for Frog On A Log? in blue, green, and a little white and black set the stage for nonstop hoots and hollers.  This frog is show in numerous positions, all filled with fun.  He touches his elongated toes doing sit-ups, struts, stretches, dozes and drifts in water and gobbles up a fly. You get to supply the sounds and narrative which is easy to do with Jim Field's images.

The body postures and facial expression on each of the animals will have you hardly able to contain merriment.  The clothing and extra items worn by each of them increases the silliness.  The attention to detail will have you relishing every pause.  Hare is reading a newspaper titled HARE TODAY.  One of the headlines refers to winning.  At one point cat is informing frog chalk in hand with drawings on a page of black.  A fox holds a magnifying glass so readers can see a flea on a pea.

One of my favorite illustrations is of a bicycle being ridden by a wizard with lizards on his hat.  His entire attire is purple with tiny stars as a pattern.  He is playing a flute on which sits a newt.  His glove is the resting place of a pair of .......... and there is a seal on the .............  Frog is hanging from his long flowing beard.

The opening and closing endpapers for How Many Legs? are done in two shades of golden yellow.  It's a design in rows of the bottom portion of legs.  A page turn shows a single party hat on white.  Jim Field begins the story on the title page and verso with a double-page picture showing the boy opening the door into the room decorated for the event.

As the narrative starts he takes us close to the shoes and bottom of the boy's legs.  In the following illustrations, most two-page pictures with a few single page images, our perspective is wider.  As the guests arrive the expressions on each of the others' faces are downright hilarious.  When the hippo springs into view, the scarf-wearing polar bear spits out his tea, the curler-wearing duck gasps and drops her plate of cake and the boy shouts with arms flung open. You should see the group gathered and giggling behind the door watching the sniffing dog wearing a superhero cape and underwear arrive.

One of my favorite visuals is when the seagull comes diving into the room.  The polar bear, duck, boy, hippo and chimpanzee are all watching him.  The dog, on the other hand, is totally focused on the food.  His big nose is resting on the table top looking for his next bite of sweet treat.

To discover more about Kes Gray and Jim Field please follow the links attached to their names to access their websites.  Jim Field gives readers a great overview of his process for both books.  More illustrations are on his Tumblr page for How Many Legs?  This links to a single activity sheet for How Many Legs?