Ready For Some Fun! Fun! Fun!?

Have you ever seen something in the distance thinking it is one thing, only to discover upon closer inspection it's something else entirely?  Have you ever bent down to pick something up and have it move quickly away just as your hand was about to touch it?  Both of these scenarios will leave you either laughing or gasping for breath. 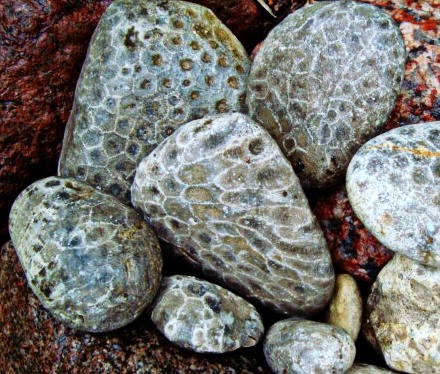 Sometimes a change in the weather will alter the reality of your perceptions.  For those people living in Michigan, a walk in the rain along the northern beaches brings to light the collectible Petoskey stones.  Without water they appear like any other grayish rock; their honeycomb formations hidden. 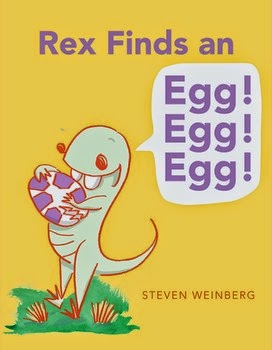 In Steven Weinberg's debut picture book, Rex Finds an Egg! Egg! Egg! (Margaret K. McElderry Books, an imprint of Simon & Schuster Children's Publishing Division, February 24, 2015) a baby Tyrannosaurus rex carries his misconception through rather tumultuous times.  His explorations reveal a wayward object next to a nearby nest.  His delight however is short-lived.

As our toothy prehistoric youngster grasps his latest treasure, a too-close-for-comfort volcano decides to erupt.  It's time to skedaddle.  Momentarily out of harm's way, stopping to catch his breath, he gazes with fondness at his egg.

His focus on his newly acquired, spotted keepsake causes him to overlook the fact he is near the edge of a cliff. Within a matter of seconds he is falling down, down, down to the deep sea.  Surprise is etched on all the faces of the watery residents and Rex.

Fortunately a kindly Sauroposeidon lifts our wayward pal to the surface.  Whew! His relief is temporary as a Pterodactyl zooms in taking him skyward.  In a series of moments which portrays Rex like a character in a comedy of errors, he finally comes to a rolling halt with his precious prize firmly held in his hands.

It seems Rex has completed a circle back to the nest and unfortunately the volcano.  As it explodes once more, the little guy loses his grip on his

Panic stricken he watches, races and screeches to a halt.  An even smaller dinosaur announces a conclusion identical to what Rex notices.  As the two eye each other new misunderstandings abound.  A familiar noise sends them running.


The repetition of words beginning with the title is an open invitation for reader participation.  With this cadence continuing in several subsequent sentences, Steven Weinberg then switches to a series of single word action verbs adding to the adventure before bringing Rex full circle.  The final sequence lulls you into the surprising twist with ease.  Here are the two passages following the first one.


The color palette introduced on the matching dust jacket and book case is, in a word, playful.  The bright yellow, red, purple, and two shades of green are the perfect complement to our spirited baby dinosaur.  The back, to the left, is the pattern of the egg.  On the opening endpapers land prehistoric creatures are pictured in red, pale yellow and pale blue.  Each is identified by name, as are the egg and a rock.  On the closing endpapers Steven Weinberg features creatures found in the water.  The colors are reversed with red still acting as an outline and text color.  All of the verso information is contained within an egg shape except for the dedication which reads:

Rendered in watercolor and digitally, the illustrations boldly span across double, single and two split pages.  The lines and color combinations radiate a child-like exuberance, each choice made with intention.  Readers are well aware of every emotion Rex experiences, picture perspective changing with each event.

One of my favorite illustrations is the first two-page spread.  It sets the stage immediately for all the action which follows.  Careful readers may notice the discrepancy in Rex's observations but at this point they can't quite be sure.  Here Weinberg foreshadows the entrance of the additional dinosaur.  There is a lot to be noticed in this first image other than color, layout and design.


Whether shared at storytime or bedtime, Rex Finds an Egg! Egg! Egg! written and illustrated by Steven Weinberg is a surefire winner.  The vibrancy in the word choices, simple sentence structure, color and images is a child magnet.  Being able to chime in on the repetitive words is the final glowing touch.