After a storm you walk along a rock-strewn beach and discover a perfectly-shaped heart rock.  You pick it up to add to your collection.  Leaves are falling like rain in the woods as autumn colors surround you.  You bend to find one to press between the pages of an old book, hoping to save even some of its brilliance.  Scurrying to your car after grocery shopping in the winter cold, an out-of-place object catches your eye.  It's a twenty dollar bill.  This decision to keep or not to keep is different. 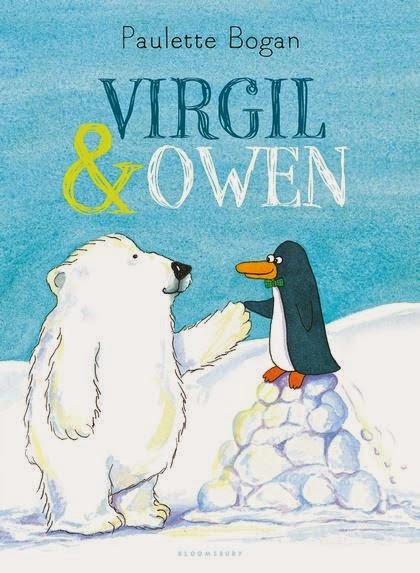 It could even be argued picking up the rock or leaf is not the right choice. Finding something offers possibilities or opportunities.  Virgil & Owen (Bloomsbury, January 27, 2015) written and illustrated by Paulette Bogan is about the discovery of many things.

Virgil is a bow-tie wearing penguin.  To say his mom is a bit stunned would be an understatement.  Virgil, secure in his ownership of the found bear, issues his first directive.

He tells the bear he belongs to him.  Without asking he further informs the bear he needs to follow Virgil.  Stopping to enjoy the company of a group of terns in the water is not part of Virgil's plan.  Everyone is happy except for Virgil.

In no mood to share the bear, Virgil wants to move to another spot.  There's nothing like a romp in the snow with a bunch of seals.  A good time is had by all except for Virgil.  Getting more frustrated by the minute, Virgil urges the bear to leave with him.

A colony of penguins swirls around on the ice with the polar bear in tow.  Everyone is smiling with joy except for Virgil.  He is stomping mad.  When he issues his repeated commands, he is shocked at the polar bear's reply.  It seems the polar bear has a name and he is not budging.

Well, that's the last snowflake for this perturbed penguin.  It's time for pouting alone.  Owen, the polar bear, and company have other suggestions.  There are antics in Antarctica for all and much more.

Using a blend of dialogue and narrative, Paulette Bogan presents a story simply told but the implications are more far-reaching.  Younger readers will fully understand Virgil's need for control but in comparison will know he needs to change.  Bogan engages her readers with the repetition of pivotal phrases which I suspect they will be more than willing to say out loud.  Here is a single passage.

The polar bear slipped and slid with
the seals.  Everyone had fun.
Virgil did not have fun.
"You are my polar bear," said Virgil
"Come with me."

On the matching dust jacket and book case, Paulette Bogan hints at the outcome of the story by having Owen and Virgil standing eye to eye, paw to flipper.  On the left, back, the two are walking away from the reader, footprints in the snow under a starry sky.  The opening and closing endpapers tell a tale of their own; two completely unique scenes in shades of blue and white highlighting the South Pole animals (except for Owen) in various activities.  Virgil stands alone eyes lifted upward beneath the title.  It is followed by the verso and dedication pages which offer an explanation as to Owen's appearance.

All of the illustrations, rendered with

span, edge to edge, across two pages.  Bogan's selection of shades of blue and white definitely convey the cold of the region but the contrasting hues of orange, red, yellow and lavender match the warmth of the story's resolution.  Touches of humor are depicted on the seal's faces, in the chattiness of the other penguins and with the green bow tie Virgil wears.  Owen's gentle mouth and the bug-eyes of Virgil are full of expression; happiness, authority, disgust, anger and friendship. Bogan extends the text by picturing why Vigil is not laughing, having fun or feeling the wonderful.

One of my favorite pictures is when the polar bear, Owen, is floating on a small ice floe splashing with the flock of terns.  One is on his head.  Others are flipping in the air, bouncing in the waves or enjoying the sight from land. Virgil, flippers on his hips, is looking very unhappy drenched in unwanted water.  It's a comic contrast.

Virgil & Owen written and illustrated by Paulette Bogan is not only about the discovery of a polar bear, it's a warmhearted story of finding your true nature and accepting the gift of friendship.  It's one of those books which listeners and readers alike will be eager to share and discuss.  Each time I've read this, I've pictured it as a reader's theater.  I think there's fun to be found within these pages too.

For more information about Paulette Bogan please visit her website by following the link attached to her name.  Paulette Bogan was a visitor at teacher librarian extraordinaire John Schumacher's blog Watch. Connect. Read.

I used to read a book while riding my bike with no hands.  Now I read lying down.  It's much safer.

I like the touch of humor in what she says here, in her books and in her illustrations.
Posted by Xena's Mom at 8:10 AM