Beach glass among a shoreline strewn with dull gray rocks and pebbles stands out like a beacon.  Popping up through dusty brown leaves, the first crocus shouts out the changing season.  A star-studded midnight walk can shift into the realm of science fiction if the Northern Lights decide to pulse across the horizon. 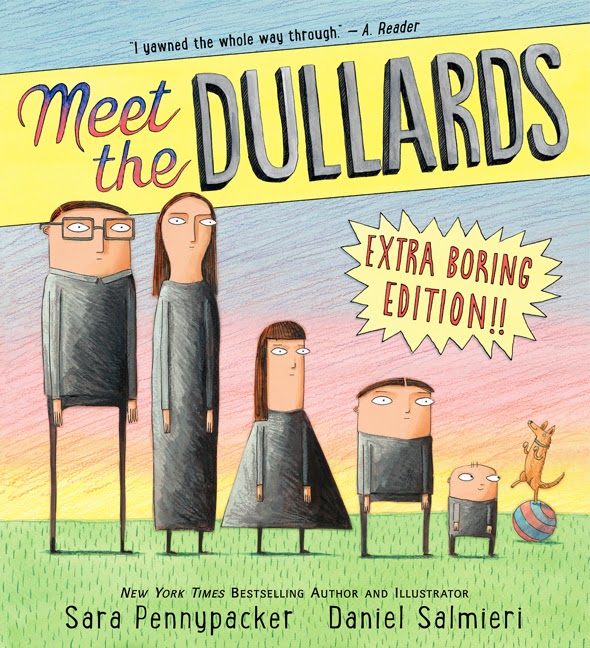 Similarly if you've ever been in a day-to-day situation suddenly shaken from tedium by a glaring contrast, it's hard not to experience a huge emotional shift.  There are those who would gasp at the change in continuity.  Meet the Dullards (Balzer + Bray, an imprint of HarperCollins Publishers, March 24, 2015) written by Sara Pennypacker with illustrations by Daniel Salmieri is about such a family; at least the parents.

One day, Mr. and Mrs. Dullard received quite a nasty surprise.

They are shocked to see their daughter and sons reading books.  This is quite unacceptable.  As a replacement the children are given blank, pristine white, paper to read.

The behavior of the children has been rather strange. Mr. and Mrs. Dullard are certain something is influencing them in an unsavory manner.  They've asked to go to school.  They've been trying to play outside.  This calls for drastic action.

Let's pause here for a moment.  Mr. and Mrs. Dullard are exactly as their name implies.  They think a snail crossing the road is

Without a second thought the family packs up and moves to a new location.  The neighbor lady, as a show of good will, brings them an applesauce cake which is turned away due to the chunky ingredients.  To calm their nerves the children are instructed to watch television.  It is, of course, unplugged.

When the parents next check on their hopefully dull children in this new boring setting, they swoon from another surprise.  To cover this latest misadventure of their offspring, they head to the paint store.  After a suitable shade is selected and applied at home, they all stare at the walls watching it dry.

When Mr. and Mrs. shake themselves out of this pleasant reverie, their children have vanished.  What the parents discover is indeed appalling.  As quick as a wink Blanda, Borely, and Little Dud and all the Dullard possessions are again loaded into the car and trailer and the family heads back to their original residence.  Relieved that total dullness is restored mom and dad drift off to dreamland as the sister and brothers race toward their dreams.


Throughout the story the three children never utter a single word.  Sara Pennypacker pens a superb setting for comedy to prevail by combining parental conversations with the narration.  Her sentences leave space for visual interpretation by the illustrator by not always stating the specifics but they also leave no doubt as to the dreariness of the Dullard's lives.  Here are a couple of examples.

Mrs. Dullard shook her head sadly.
"Where did we go wrong?"
"Now, now," Mr. Dullard comforted his wife.
"It can't be our fault...we're perfectly dull.
"Perhaps it's this place," he said. "Last fall, remember,
some leaves turned color. ...

"Please don't use exclamation marks in front of our children," said Mrs. Dullard.


The family Dullards featured on the front of the dust jacket (I'm working from an F & G) is as bland as can be; standing stiffly all in a row, wearing gray clothing, lacking any sort of style, with faces nearly devoid of expression.  The one exception is Little Dud.  His head turned to watch the dog balancing on the ball is the first hint of attitude drifting away from dull.  On the back, to the left, within a circular shape surrounded by blue sits an open box.  Its label reads Interesting Items.  Inside are a game, Monotony, and a book, Cooking Without Flavor.  The title page showcases three photographs, one for each of the children, shown in situations with their boredom in comparison to the other animated children.  With a page turn, the verso and first page of the narrative show the aghast looks on Mr. and Mrs. Dullard's faces as they see their children reading...horror of horrors...books.

Rendered in watercolor, gouache and colored pencil, the images stretch and fuel the text with utmost hilarity.  Daniel Salmieri has a true gift at featuring, through his pictures, insider moments in contradiction to the written words.  Most of the illustrations span two pages with only a few exceptions.  Those exceptions, like the image on the back of the dust jacket, are framed in a smaller circle, delineating a special sequence. Careful readers will watch the children, their body postures, and facial expressions to gather clues as humorous expectations grow.

One of my favorite illustrations is one of several which are wordless.  Mr. and Mrs. Dullard have found their children, after the watching-the-paint-dry episode, playing outside.  Spanning two pages is the open window with them standing on either side.  Against the background of a sky at sunset the children are engaged in activities reflective of their heart's desires, hinted at in their reading choices and their antics at the paint store.  The looks on everyone's faces are laughter inducing.


Meet the Dullards written by Sara Pennypacker with illustrations by Daniel Salmieri is most assuredly not the Extra Boring Edition!!  This title is going to become a story time and bedtime favorite due to what I term a supremely high laughter factor.  The constant comedic contrasts between text and images and the parents and their children make this a picture book prize.

For more information about both Sara Pennypacker and Daniel Salmieri please visit their websites by following the links attached to their names.
Posted by Xena's Mom at 11:19 PM