One late summer afternoon as I was strolling down the streets in a tiny town located along the shore of Torch Lake in Michigan, a tiny kitten followed me wherever I went, purring and rubbing against my legs.  After some inquires with the local shop owners, it appeared this wee bundle of fur was an orphan.  By the time I decided to give it a home, someone else with children offered to take it. 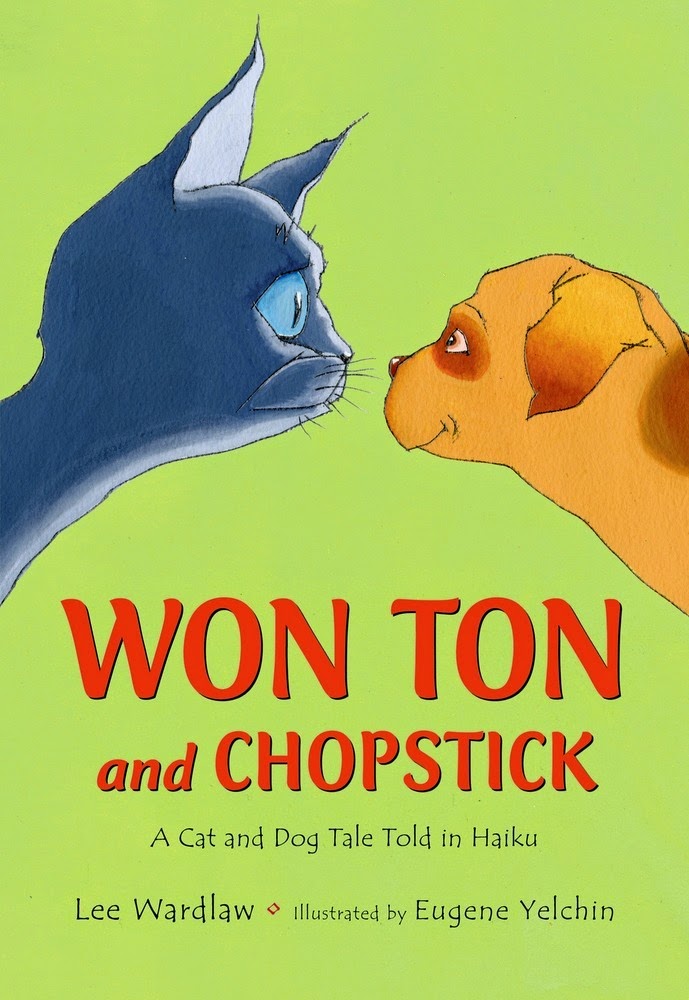 Apparently fate already had another companion ready to become part of my family.  I just didn't know it yet.  The winning team of author Lee Wardlaw and illustrator Eugene Yelchin who gave us Won Ton:  A Cat Tale Told in Haiku has followed with an equally engaging and humorous companion title, Won Ton and Chopstick:  A Cat and Dog Tale Told in Haiku (Henry Holt and Company, March 17, 2015).  Like me, Won Ton has no idea about the canine creature about to take up residence in his home.

When Won Ton awakens from one of his naps, sights and sounds alert him to a disturbance in his household.  A closed door appears to hold the answer to his question.  When it opens, he is aghast!  His boy...yes HIS boy...is holding a puppy.  This simply cannot be true.

Running from the room yowling in protest, Won Ton finds out who is taking center stage now.  He is gently put aside.  When his boy and sister try to name the canine intruder, Won Ton's suggested name, as you may guess, is not even close to their proposals.

When Won Ton attempts to lay down the law, as to what is what in the four-footed realm, he finds himself on an unwanted vacation in the great outdoors.  Not even the prospect of a wayward mouse can lessen the cat's loneliness.  Back inside for another day, our feline friend decides to take a different approach.

The toilet paper caper does not end well.  With both cat and pup now relegated to the joys of fresh air, Won Ton is delighted to encourage the youngster in a variety of "oh no" activities.  Bath time, rain time and trash time follow with the duo striking a tentative partnership.

What Won Ton knows to be true is pups make good pillows, their language of arfs, howls and whining is almost incomprehensible and

Only time will tell how this tale unfolds.  And the pup's name, given by Won Ton, you ask?  It's a poetic masterpiece.


In an author's note contained in the verso, Lee Wardlaw explains the form, senryu, used in writing these thirty-seven (haiku) poems, the later favoring nature over the imperfections sometimes present in relationships which is showcased in the former.  Each selection focuses with appreciation on feline features while emphasizing the apparent "que-sera-sera" nature of the newcomer.  The contrast between the two depicted in the thoughts of Won Ton provide for numerous humorous moments.  The pacing prevalent through word selections will have readers feeling like the characters portrayed.  Here are two poems from The Naming.

Brutus?  Ninja?  FANG?
Cats don't laugh, Boy, but I might
make an exception.


Looking at the front of the identical dust jacket and book case, one thing is obvious.  The puppy is looking at Won Ton with perky curiosity.  The cat, on the other paw, is reserving judgment for now...maybe forever.  To the left, on the back, on a sky blue background, the first title with endorsements is highlighted.  At the bottom a smaller picture of Won Ton shows him with head bowed, one paw resting on his forehead.  The opening and closing endpapers, alternating in another shade of blue and green, are patterned in a mouse toy and a red Kong.  Beneath the text on the title page the backs of Won Ton and Chopstick are shown sitting side by side on a bright pale yellow canvas.

With only a few exceptions the illustrations, rendered in

graphite and gouache on watercolor paper,

spread over both pages either as a single image or two separate pictures joined by an element from one crossing the gutter into the other.  Only three times does the background hue remain the same designating important events in the story.  Eugene Yelchin has a discerning eye for pairing background colors together creating an enjoyable sequence and extending the text.

His lines used for Won Ton and the puppy capture the essence of cat and dog.  Sometimes only a portion of one or the other is needed to convey their presence.  The body postures and eyes for both Won Ton and Chopstick speak clearly about their personalities.

One of my favorite two pages is of the puppy wrapped in a towel in the bathroom after his encounter with a rather smelly wild creature.  The blend of pastel tile work with the polka-dotted towel and the placement of bones, rubber ducky and brush are perfect.  To the right on a plain pale spring green background is Won Ton cleaning himself.  His tale extends into the bathroom scene.


Both cat and dog lovers, anyone of any age who enjoys our furry friends, is going to thoroughly enjoy repeated readings of Won Ton and Chopstick:  A Cat and Dog Tale Told in Haiku written by Lee Wardlaw with illustrations by Eugene Yelchin.  With each reading the humor grows as you come to know each of the characters.  Practice reading it aloud so you get the voice of Won Ton right as well as the cadence of these poems.  Be sure to pair it with the first title.  You might also want to use in with My Big Dog by Janet Stevens and Susan Stevens Crummel.

To discover more about Lee Wardlaw and Eugene Yelchin and their work, please follow the links attached to their names to access their websites.  This link takes you to an interview of Wardlaw, Three Questions For Lee Wardlaw:  Advice For Young Writers And Illustrators, life advice and WON TON AND CHOPSTICK at author and illustrator, Debbie Ridpath Ohi's website.  Yelchin includes the entire dust jacket and four double-page interior visuals at his site; one of which is the favorite I mention.  If you follow this link to the publisher's website you can view more interior pages.  Links here are for a printable teacher's guide and an activity kit.
Posted by Xena's Mom at 4:19 PM