When someone mentions breakfast the first thing I think of is Sundays.  Growing up, during the other six days of the week, we had cereal and fruit for the sake of brevity.  Sundays were not only designated family days in our home but they were a time for making pancakes for breakfast.  No one could make buttermilk or buckwheat pancakes like my dad.

Under his watchful eye we were allowed to help add and mix the ingredients.  The griddle had to be the right temperature.  After the batter was poured, we watched for the bubbles to form signaling the time to flip the pancakes over.  It was sheer heaven when the maple syrup was drizzled over the top before we took the first bite.  Without the maple syrup the meal would not be complete.  I shudder to think what would have happened if there was not enough maple syrup for everyone.

Debut picture book author, Josh Funk, is stopping by today with a monumental feast for our eyes regarding the release of his first picture book, Lady Pancake And Sir French Toast (Sterling, September 2015).  Bickering between his children when added to a mind relishing the thought of

funny ideas that will entertain

equal a rhyming race for readers.  Josh has graciously agreed to answer a few of my questions.

In your PiBoIdMo article you explain the competition between your two characters.  Could you briefly go over the main story line of the book again for readers here?

Hi, Margie!  Of course I can!  Inside a food-filled-fridge, Lady Pancake and Sir French Toast are the best of leftover friends-UNTIL they find out there's only a single drop left of maple syrup left in the bottle.  Almost instantly they begin racing through the fridge for that last drop-causing calamitous culinary chaos along the way.

I do think the blurb written by the folks at Sterling Children's does a great job of summing it up, too:

"A thoroughly delicious picture book about the funniest "food fight!" ever! Lady Pancake and Sir French Toast have a beautiful friendship—until they discover that there's ONLY ONE DROP of maple syrup left. Off they go, racing past the Orange Juice Fountain, skiing through Sauerkraut Peak, and reeling down the linguini. But who will enjoy the sweet taste of victory? And could working together be better than tearing each other apart? The action-packed rhyme makes for an adrenaline-filled breakfast . . . even without a drop of coffee!"

How did you come to assign distinguished titles of royalty to their names?

Lady Pancake was always a Lady.  It's just the title that came out of my mouth (er...fingers on the keyboard) when drafting.  As a rhymer, a lot of it comes down to rhythm.  I'm a big stickler for rhythm in rhyming picture books and based on that it flowed well.  Sir French Toast was originally Mister, but some folks in my critique group suggested sticking with the royalty theme (in fact, I just dug out that first draft from late 2011.  It was Carole who suggested Sir-so thank you, Carole).

But the real question is why did breakfast foods get regal names?  Well, to my mouth and stomach, there is no more majestic and dignified meal than an exquisite brunch buffet.


Why did you select the particular setting for your characters over another scenario?

Maybe it's just me, but I've always been suspicious about what goes on inside the fridge when the door is closed.  I imagine it's like Toy Story, but with food.  Which foods would be friends?  Who are the leaders?  Who are the troublemakers? (I'm looking at you Brussels sprouts)  Who are the villains?  What would happen in a bean avalanche?  Come on, Margie, you must have wondered about these things?

And as you already noted, I write what I'd like to see illustrated.  And Brendan Kearney did an amazing job of depicting this setting-so much better than I thought it could ever be.

As a matter of fact, Josh, I have wondered what happens behind the closed door of the refrigerator.  My food seems to disappear.  There have been days when I've looked at Xena with a more critical eye.

Do you prefer pancakes or French toast?

Is maple syrup your favorite topping for pancakes or French toast?

I gotta say, a high quality maple syrup from Vermont or Canada is fabulous, although I don't have such an experienced palette as to distinguish between grades of Golden or Amber, etc.  The boysenberry syrup at IHOP is a personal family favorite, but I couldn't have that all the time.

Do you have anything else you would like readers to know?

I just want to thank you, Margie, for hosting my debut Cover Reveal!  I've been a huge fan of your site for a while and I'm honored to have this little book be a part of your world.

I was able to connect with Brendan Kearney about his illustrations for Lady Pancake And Sir French Toast to ask him a few questions.


From the time you first read the manuscript until the finished illustrations, how much time did it take?

This varies from project to project, but the illustrations for this book came together
fairly quickly.  I think Josh, Sterling and I had a similar idea for the feel of the book from the
beginning.  It took about 6 months to get from manuscript to final art and then a few weeks of tweaking and making adjustments.


Could you briefly explain your process and form of medium used to create the pictures?

I draw all the lines by hand with black colouring pencils.  I then scan the drawings and colour and texturise them digitally.

What is your favorite character Lady Pancake or Sir French Toast and why?

I love all the characters in this book, but I had some real fun coming up with all the background character, like the broccoli and the beans.  I love adding detail to my work, and it was especially fun to add faces to everything, bringing everything to life. ☺


Without further ado let's dive into this delicious treat, the cover reveal for Lady Pancake And Sir French Toast.  My appetite for this scrumptious read is growing by the minute. 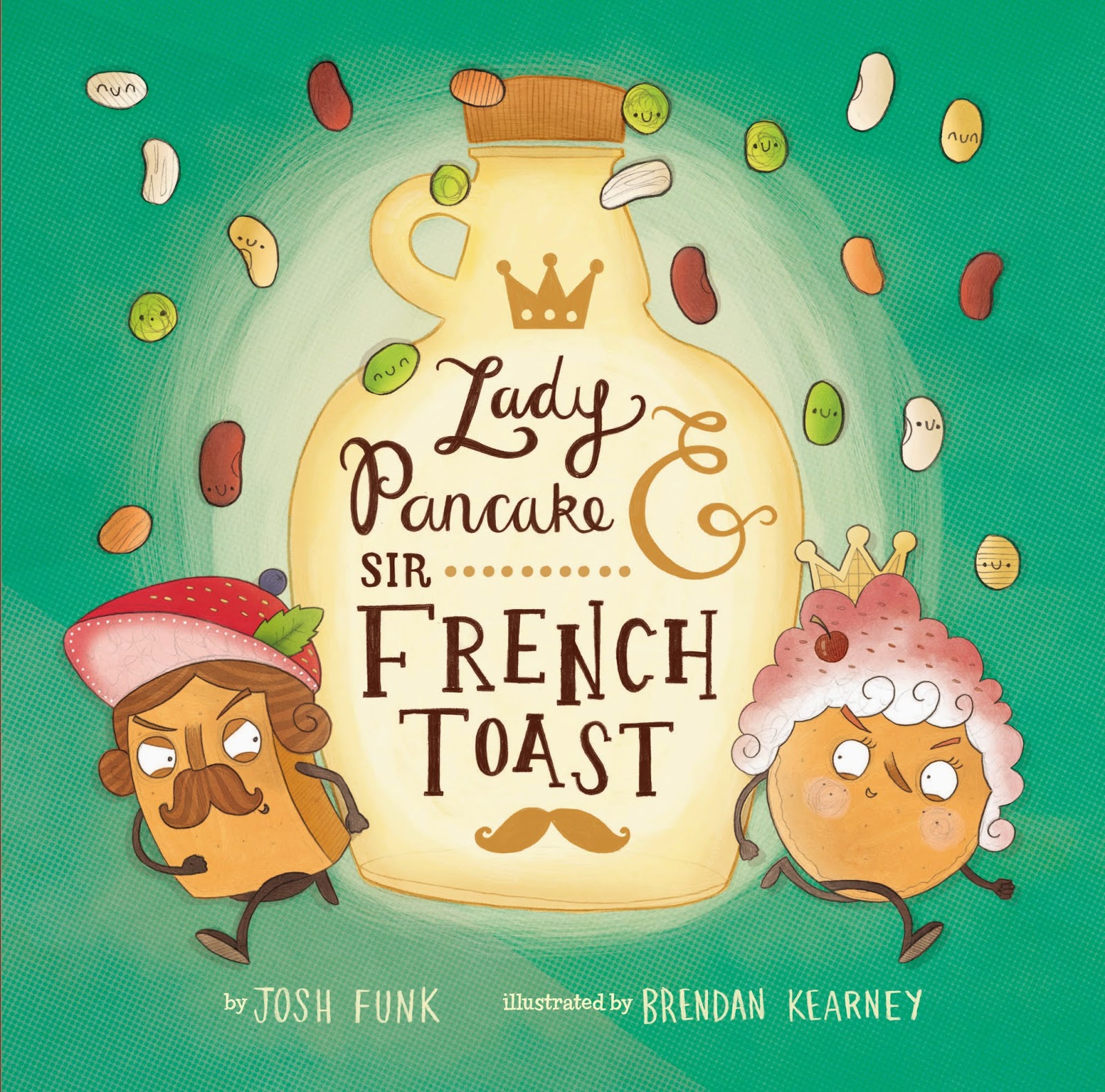 Clearly we may be looking at morning meal mayhem with the royal duo on the run.  I can think of several questions I hope are answered in the story especially the presence of spilled beans.  Brendan Kearney's color palette is absolutely mouth-watering; a pleasing mix of warm hues on a soft cool background.  I'm also getting a distinct craving for maple syrup.  How about you?

I have started a Pinterest board for this title including recipes, other books about breakfast food especially pancakes.  I am thinking of including books about the ingredients found in both pancakes and French toast along with lessons in following directions and the math used to cook.  Other suggestions are welcome.