As a child many summer and autumn vacations were spent in northern Michigan, particularly in Benzie County around Crystal Lake, Big Platte Lake, Little Platte Lake and the Platte River.  One of the highlights of trips in later years was visits to the studio and home of Gwen Frostic.  A Michigan born artist, her unique perspective on the natural world, in both words and pictures, had captured the heart of my mom years earlier.  Her vision matched the views held by both my parents on noticing all the little things to be found in our natural world every single day. 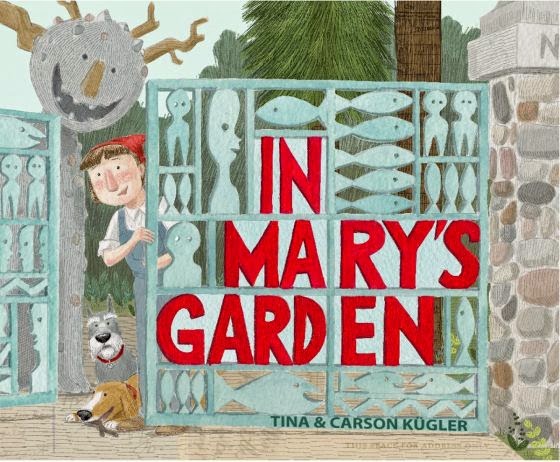 When I first read In Mary's Garden (Houghton Mifflin Harcourt, March 17, 2015) written and illustrated by Tina and Carson Kugler I sensed a parallel in the lives of these two women.  Although their work is completely different both chose to focus on making art based upon their observations and interpretations of the natural world.  Both of these women chose to follow their own path.  (Xena wants me to add that they both had dogs as friends.)

Mary was a little girl with big ideas.

Regardless of the expected norm in schooling at the time, she took classes which were most interesting to her.  When her parents built a cottage along the shores of Lake Michigan, it was Mary who helped her father.  At an early age Mary had found what filled her heart with joy.

Mary loved to travel, drawing all that she saw.  Art filled Mary with contentment.  Making art made Mary even more thrilled.

Sometimes during the coldest, snowiest parts of winter in that home along with shores of Lake Michigan in Wisconsin, Mary longed for those places seen in her travels.  When the change of seasons came one year, as Mary and her two canine pals, Sassafras and Basil, were exploring, a discovery was made at the beach.

It was a part of something bigger.  As the trio searched their wagon filled with other treasures.  Mary had an idea.  Taking skills learned when she was a little girl; all those parts went to create a truly spectacular being.

As is the case when a spark from our imagination is allowed to grow, more and more companions for the unusual sentinel filled Mary's yard. Whimsical but sturdy, each was fashioned from a little of this and a little of that.  Unlike the other Mary there is nothing contrary about this garden, it grew in happy harmony.


Tina Kugler and Carson Kugler, husband and wife, inspire readers from the first sentence.  To begin we are curious as to what big ideas Mary had.  When we are given specific incidents where Mary elected to be distinctive in her choices, we already see her life taking shape.  The Kuglers' decision to include her love of travel, documenting it with drawing, builds a bridge to the beach excursions and the resulting sculptures.

Each sentence and the placement of those sentences build a story; a little at a time exactly like Mary Nohl's art.  The repetition of a single phrase ties two separate events together seamlessly.  By including the two dogs and their names we realize their importance in Mary's life and her love of nature.  Here is a sample passage.

One spring morning,
Sassafras and Basil discovered
a marvelous creature
washed up on the sand.

Only, it was just a little piece of him.


When you open the dust jacket (I'm writing based upon an F & G.) it reveals a delightful depiction of Mary and the unique gateway to her home across the spine to the flap folds.  It's meaningful to have her first creature depicted as an element on the front.  The bright red text is reflective of the red accents found in Mary's actual home and yard.  The extra touches in her scarf and the dogs' collars are good design choices.  On the title page a close up of the being's legs are shown with Sassafras, stick in mouth, gazing upward.  Wildflowers are clustered around the statue's feet.

The following double page spread begins the narrative on the right with the verso on the left.  All of the illustrations by the Kuglers are rendered

in traditional watercolor with digital painting, collage, and vintage papers.

Visual sizes shift according to the story but most span across two pages.  The color choices and perspective convey mood and emotion with much affection.  The matte-finished paper allows for a texture in many of the illustrations like that used by Mary in her art.

At one point readers need to move the book to view a vertical image which is breathtaking.  I remembering gasping the first time I saw it.  The final two pictures of Mary's home, one at night with the gate closed and the either during the day with the gate open, are a pictorial tribute to an amazing woman and her creativity.

One of my favorite illustrations is after Mary finishes her first sculpture.  The creature is in the left corner, back to the reader, as if peering down at Mary and Sassafras.  Both look up at it thoughtfully; making a decision.  Off to the right Basil is dragging the wagon into view, ready for another adventure.  Green is a predominant color with the woods in the background.


In Mary's Garden written and illustrated by Tina Kugler and Carson Kugler is a striking example of an excellent nonfiction picture book biography.  It features a woman who followed her passion with intention.  It gives readers permission to dream and dream big as did Mary Nohl.  I have a feeling this is going to enrich every single reader.

For more information on Tina Kugler and Carson Kugler please follow the links attached to their names which take you to their website or blog.  From each of these you can navigate to other online venues for their work; one of which is Studio Kugler.  The Kuglers created an image at Celebri-Dots. The cover was revealed at author and teacher librarian, Carter Higgins' blog, Design of the Picture Book.  You can see both the front and the back.  Teacher librarian extraordinaire, John Schumacher, highlighted the book trailer on his blog, Watch. Connect. Read. along with a wonderful interview of both Tina and Carson Kugler.  Today super and busy librarian, Matthew C. Winner featured the Kuglers in a fun conversation on his Let's Get Busy Podcast.  I hope you find this article, 'In Mary's Garden' imagines young Mary Nohl creating her artistic world, as interesting as I did.
Update:  There is now a downloadable Teacher's Guide and Activities. July 28, 2015.  UPDATE:  Tina Kugler is interviewed at KidLitArtists on June 20, 2016.
Posted by Xena's Mom at 4:59 PM