Throughout the course of our lives we will miss people, places and things.  We will feel the panic of lost car or house keys, a misplaced family heirloom, not being able to locate an item we were supposed to keep safe for someone or a file deleted by mistake on one of our devices.  We will long for the peace of walking a pathway through a particular pine forest, the solitude of sitting on a special deserted beach, or the sanctuary of a certain spot in a certain room in our childhood home.  It is hard not to want the protection of a parent's arms or to hear the sound of their familiar voice.  Moments are empty without the comfort of a beloved pet lying next to us.  There is a hollowness in places without treasured friends or family. 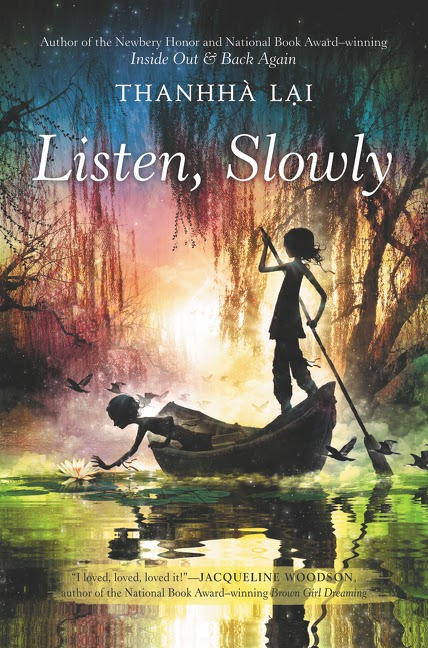 History lists the end of the war in Vietnam as April 30, 1975.  For those whose loved ones were/are listed as missing in action the finality of the war is not so easily accepted.  In her first book, Inside Out & Back Again, Thanhha Lai takes readers back to 1975 in Vietnam as a family seeks refuge in the United States.  In this second title, Listen, Slowly (Harper, February 17, 2015) twelve-year-old Mai is traveling to Vietnam more than thirty-five years later because of a letter her grandmother, Ba, has received.

I whip my head toward the airplane window as soon as Dad scoots into my row.  There's nothing to see except clouds and more clouds, but anything is better than looking at his fakey sorry-to-do-this-to-you face.

When Ba left Saigon two days before it fell back in 1975 she did so with her seven children, knowing then her husband had disappeared nine years earlier.  Now a detective claims to have information gained from an enemy guard who held Ong prisoner.  As the youngest of her grandchildren Mai will stay with Ba until all is known.  Mai's father leaves them to practice his medicine with people far to the north.  Facing the prosecution of a big case, her mother is staying at home in southern California.

Spending her summer vacation with people she does not know in an unfamiliar country, when she would rather be with friends at the beach, has Mai being less than accommodating. Mai longs for a break from the ever-present pursuit of being a top student consistently working on her mom's "SAT words" but she has been carefully schooled in tradition.  She is torn between her wishes and love for her grandmother.

Quickly absorbed into the customs and constants of life in Ba's village, always surrounded by a host of "maybe relatives", Mai, combating the heat, humidity and ever present mosquitoes, slowly finds herself reluctantly adjusting.  Intricate negotiations with the detective and the guard coupled with the ambiguity of the much-longed-for information heighten the tension.  Alliances are made by Mai with two other teens in the community.

Anh Minh has been studying in Texas at a boarding school through the efforts of the people in his village.  He is acting as an interpreter for Mai. (Mai intends on keeping her knowledge of spoken Vietnamese a secret as long as she can.) Ut, exhibiting a similar rebelliousness as Mai, the only girl in the village sporting a buzz cut, decides they can assist each other as friends.  Her passion for a particular frog, for frogs in general, creates an unplanned and planned escapade for Mai.

Scenes in the village, Hanoi and Saigon elevate the intensity of Mai's purpose, her education of her current surroundings and her grandmother's deep need to know.  The final chapters race toward a powerful and moving resolution.  Readers and Mai are left with a new understanding of family, tradition and the country and people of Vietnam.


When I finished reading the first time (I've read most of it again), I was so immersed in the story, I couldn't believe I was seeing snow outside my window instead of the landscape described within the pages of this book.  Thanhha Lai uses words the way an artist uses paint creating pictures so vivid we step into them easily.  Her detailed descriptions of the cities, countryside, Ba's village, food, clothing, architecture of the homes and the people give us a new lens in which to view Vietnam.

Mai's dialogue within her mind, with her parents, grandmother, her good friend at home, Montana, and her newly met-relatives are filled with truth and humor.  Whenever the conversation is spoken in Vietnamese, we read it in italics but see English.  In this way we, like Mai, are living in two worlds at the same time. At times Mai's insights are laugh-out-loud funny.  At times your heart will ache for Ba as she shares of her relationship with her husband in a series of conversations with Mai.  The wisdom of Ba paired with Mai's adolescence is stunning to read.  Here are some sample passages.

Ba lets go of my hand and turns from me.  Time to let her rest.
My body loosens and expands, remembering how it used to make room for her words to wiggle deep into the tiny crevices alongside my bones, muscles, and joints.  Becoming a part of me.  I've always been able to imagine her as a rich girl who grew up in wartime and ended up raising seven children alone.  She always says, "Co den tay, phai phai." Flag in hand, you must wave it.  It wasn't about being brave or extraordinary so much as inhaling all the way to her core and accepting her responsibilities.

I hear whistling---the kind humans make when trying to sound like a bird.  I crawl out of the net, then jiggle to make it hard for rebellious, day-hunter mosquitoes to stab my exposed skin.  Mom packed for me, all capris, as I was too busy seething.  I can just hear her reasoning:  skirts too impractical, shorts too revealing, pants too hot, so let's do capris.  Mosquitoes all over Vietnam cheered.

"This tree has outlived every other livin' thing in the village.  We guess it could be three hundred years old." Anh Minh glows while saying that, then he actually puts his palms together and bows at the tree.  I might as well do it too.  Is bowing to trees a Vietnamese thing?
Village life is centered around the tree.  In one corner stands a faded, mossy pagoda, its door wide open in the heat.  Inside, on tile, dozens of dogs with lolling tongues lie half asleep.  Among the dogs and their spilled water bowls, a duck is waddling, sipping here and there.  Somehow, perfectly normal.


This book, like its predecessor, is a gift to readers.  Thanhha Lai gives us in Listen, Slowly the opportunity to alter our possible impressions.  It is rich.  It is rare.  It is not to be missed.


To learn further about Thanhha Lai and her work please visit her website by following the link attached to her name.  'Listen, Slowly' About Connecting To A Heritage You Don't Know is an informative interview of Thanhha Lai on NPR All Things Considered.  Enjoy the chapters below provided by the publisher.