To Seek At Sea

You know you are fully immersed in the world of children's literature when you hear the word bears and don't think of those immense mammals who roam our planet.  When I hear the word bears, I think of Boris and Stella and the Perfect Gift, Baby Bear Counts One, You Will Be My Friend, The Bear's Song, The Sniffles for Bear, Bear Has A Story To Tell, Polar Bear Morning, Bear and Bee, Bear's Loose Tooth, Otto the Book Bear, or Tea Party Rules.  Likewise when most readers hear the words three bears, they immediately think of Goldilocks and her encounter with Papa Bear, Mama Bear and Baby Bear. 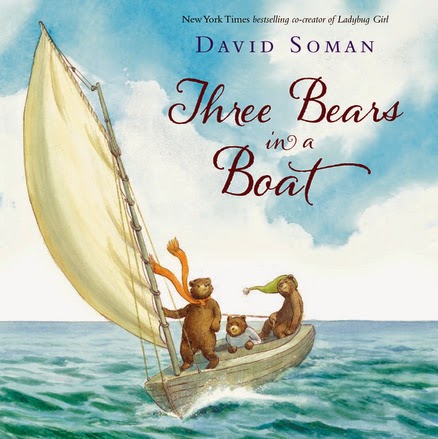 A ferocious wind has been howling all day, along and inland from Lake Michigan.  The very last thing anyone would expect to see riding these six foot waves is a boat sailed by three bears. Written and illustrated by David Soman, co-creator of the Ladybug Girl series, Three Bears in a Boat (Dial Books for Young Readers, an imprint of Penguin Group (USA) LLC) is an unforeseen adventure taken to right a wrong.

Once there were three bears, Dash, Charlie, and Theo, who lived by the sea.

In doing something they shouldn't have been doing when their mother is away, one of her priced possessions is broken.  Worried about her reaction, they leave the house hiding by their boat on the beach.  Now Dash has an idea which Charlie and Theo think is pretty good.  They need to find another blue shell to replace the one now in pieces.  Their mother will never know what they have done.

In mere minutes they have set sail, noticing other bears in other boats.  Surely one of them will know where to find another blue shell.  Unfortunately neither the bears in the first, second or third boat seem able to help.  It's an older bear, a bear that has spent many days upon the sea, who points them in the right direction.  Off they go to look for

He also gives them a final piece of advice which proves to be more valuable than the trio initially knows.

They sail and sail and sail past all kinds of places, friendly and not so friendly, until they do not see anything familiar.  As soon as they discover the island they begin their search.  Do you think they find the shell?

Back at the boat accusations begin escalating into a full-blown growly bear quarrel.  In focusing on fighting rather than navigating homeward, a huge storm catches them by surprise.  Interestingly enough a shift in attitude triggers another change.  They are in for more than one surprise upon their arrival at their very own beach.

A tale of discovery spun in the time-honored storytelling tradition is exactly what David Soman has given his readers.  It's certainly a quest seeking an answer to a problem.  Three times they ask but do not find; an important number in spinning a story.  Even when given directions by the older mentor figure they fail until fear unites them; giving them perspective and new purpose.

Soman employs witty descriptions, causing readers to nod their heads in agreement.  We feel an attachment to the characters.  Beautiful language brings us into their time and place.  Here are two passages.

Afraid of their mama, who, after all, was a bear, the three fled from their house down to the beach, and huddled behind their boat.

Their sail flew open like a wing, and the boat flashed across the water.

Though I have had more than one or two scares on a sailboat at sea, I would not hesitate for a second to set off on a journey with the three bears in their boat as pictured on the front and back of the matching dust jacket and book case.  As David Soman desired, you can sense the sights, sounds and feel of the wind and water in these first images. It's a picture filled with promise.  Done in shades of brown his front endpapers introduce readers to each bear framed by life ring with a lighthouse in the lower left hand corner.  The closing endpapers map their journey complete with a compass rose and an anchor as an additional element for balance

On the title page we are given a glimpse of events to come in mama's absence.  The first two page spread of the three bears at the beach is stunning and completely charming.  Each is wearing their favorite clothing; a scarf, a hat and a striped shirt.  One is flying a kite, the other using a hula hoop and the third is building a sand castle.  Throughout the book altering image sizes creates interest, enhances the narrative pacing and invites us to participate.

Soman gives a nod to other literary greats more than once in his attention to detail.  Additional elements add to the total effect.  The old sea captain is wearing an anchor tattoo and has a gold hoop earring in his ear.  When the bears are swimming underwater looking for the shell at the island, the octopus is glaring at one with hands on its hips.

While a full color palette is used the emphasis on blues and greens creates a marvelous luminosity.  When their boat is lifted above the water by a pod of whales it's hard not to gasp in delight.  The two pages with this sentence

They sailed on farther than they had every gone before.

are breathtaking as we gaze at the expanse of sea with the play of light on the water; their boat sitting in a tunnel of shimmering ripples.

David Soman has given readers a book to enjoy over and over for years to come.  Three Bears in a Boat is sure to be on many Mock Caldecott lists.  I know it will find a place on mine.  Share it one on one or with a group.  I don't think you will have to listen too closely to hear a collective sigh at the conclusion...or perhaps see a smile.  Enjoy David Soman's video.

My copies of this book were purchased from my favorite indie bookstore, McLean & Eakin Booksellers in Petoskey, Michigan.  I hope you can get a copy from your favorite independent book store or your public library.
Posted by Xena's Mom at 1:56 AM