A fact of life for most of my friends and I were our parents collecting S & H Green Stamps.  Certain businesses would give the stamps to customers making purchases; the amount determined by the dollars spent.  The stamps were placed in books ready to be exchanged for merchandise at a redemption center.

This practice continues today for consumers with most participating businesses assigning points rather than giving stamps.  Schools still looking for more money to support programs gather soup can labels and box tops or bottoms to exchange for cash. 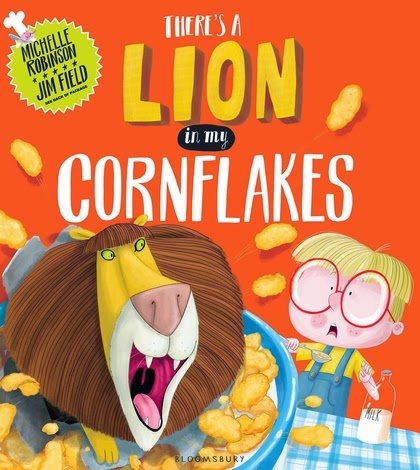 Upon learning to read, one of my morning delights was to see what was new on the cereal boxes.  If you saved certain proof of purchase portions, you could turn them in for a small toy.  I wish with all my heart I would have read what the two brothers in There's A Lion in my Cornflakes (Bloomsbury UK, July 2014) written by Michelle Robinson with illustrations by Jim Field saw on the fateful day this story starts.

If you ever see this on a packet of cornflakes:
Mr. Flaky
Corn
Flakes
Free
Lion
Just Save
100
Coupons
Ignore it!

The young narrator (Eric) and his older brother Dan decide this is too good to resist.  Combining their savings, making trip after trip to the grocery store and endless hours of cutting give them their desired results.  It also gets them in a bit of trouble.  Their mom has decreed consumption of cornflakes for three daily meals until they are all gone.  As an added precaution she is withholding all pocket money until there is no longer a sign of this particular type of cereal in their home.

You know what?  They are so excited about getting a lion; they don't care about their punishments.  They have plans, big plans, for having a lion of their own; walking with it, riding it to school and even using its teeth to open tin cans.  As a single day of waiting stretches into seven days, it quickly becomes obvious they are not the only people who have collected the proper amount of coupons.  Delivery of one lion after another is made to households all around them.  Where is their lion?

On day eight they are beside themselves with excitement as the all too familiar truck pulls up in front of their house.  Oh! No!  It's not a lion.  It's taken to the wrong house.  It completely destroys the neighbor's back yard.  Apologies are made and cleanup commences.  The problem still remains.  There is no lion.  There is a grizzly bear.

When a letter arrives from the company in response to their query about their free lion's absence and the grizzly bear's presence, they discover another creature is being sent.  (Mr. Flaky is out of lions.)  This one decides to set up residence in the family bathroom.  An irate phone call from the boys' dad prompts the appearance of a third beast.

Dad explodes in frustration and anger, ordering everyone, human and otherwise, into what's left of his car.  He is going to get to the bottom of this fiasco.  On the return trip home only Dad seems to be pacified; mother and sons are decidedly not.  When the brothers begin to discover by looking at what they have instead of focusing on what they don't, pure delight replaces frustration.


By the time readers finish the first three sentences of this title, they are fully hooked.  Author Michelle Robinson has peaked their curiosity.  Page turn by page turn, Eric tells the tale as only someone his age can.  Word choices evoke a sense of drama as the comedy increases.  Here is a single sample passage.

It wasn't our fault! But Mum went bonkers.  She made us apologise to Mr. Harper AND tidy up.  It was awful.  We had a grizzly bear, a grumpy mum and absolutely NO free lion.


Looking at the vibrantly colored front of the book case, it's hard not to hear a resounding roar echoing in the room.  I don't know about you but I want to open this book to see how a lion ends up in the boy's cornflakes.  The beginning and closing endpapers are a repeated tiled pattern of the Free Lion coupon shown in clusters on the back of the cover.  Eric and Dan, wearing their school uniforms, are riding on the back of a lion pictured beneath the title.

Varying illustration size from two pages, to single pages and groups of smaller pictures surrounded by white space, Jim Field's artwork mirrors and extends the humor bubbling to the surface as the story is read.  He shifts perspective to involve us in the events as they unfold; bringing us close to Eric at the breakfast table on the first two pages, moving back to show the brothers cutting out endless coupons sitting on a mound of them nearly covering the family dog and the panoramic view of the park as all the lions already delivered play with their children.  Every time I read this title I see new details; details which guarantee laughter.

Careful readers will notice Eric wearing different colored socks as well as the changing table settings, clothing worn by the family and expressions and positions of the dog when Field depicts the boys having to continually eat cornflakes.  The grouping of three pictures of Eric, Dan and the dog waiting on Thursday, Friday and Saturday for the lion delivery is hilarious.  Each time Eric sinks lower on the page until all we see are his feet after he falls asleep.  The dog goes from holding his collar and leash for a walk, to looking woebegone and eventually sleeping with Eric's glasses on his face.  And there is the distinct yuck factor as a bored Dan picks his nose.

One of my favorite illustrations is the previously mentioned park illustration.  You could look at this for hours discovering the amusing tiny elements.  The tea party scenario is particularly funny.  Two little girls have a blue and white checked tablecloth spread on the grass.   One is pouring the tea as the other carrying a basket filled with treats stands next to the lion.  What makes you grin like crazy is the lion is sitting there prim and proper with its mane in pigtails.


As if the premise of being able to acquire a free lion after saving one hundred cereal box coupons is not silly enough, the parents being more upset with the replacement animals than the fact their sons even did this is the best kind of humor appealing to the child in all of us.  There's A Lion in my Cornflakes written by Michelle Robinson with illustrations by Jim Field is clever and highly entertaining.  I predict it will rarely be on the shelves.  The United States release is to be May 2015.
If you are interested in learning more about the work of Michelle Robinson and Jim Field please follow the links embedded in their names to access their websites.  There are supplemental activities posted in both places.  Enjoy the trailer!

There's a Lion In My Cornflakes - Book Trailer from Jim Field on Vimeo.
Posted by Xena's Mom at 12:29 AM